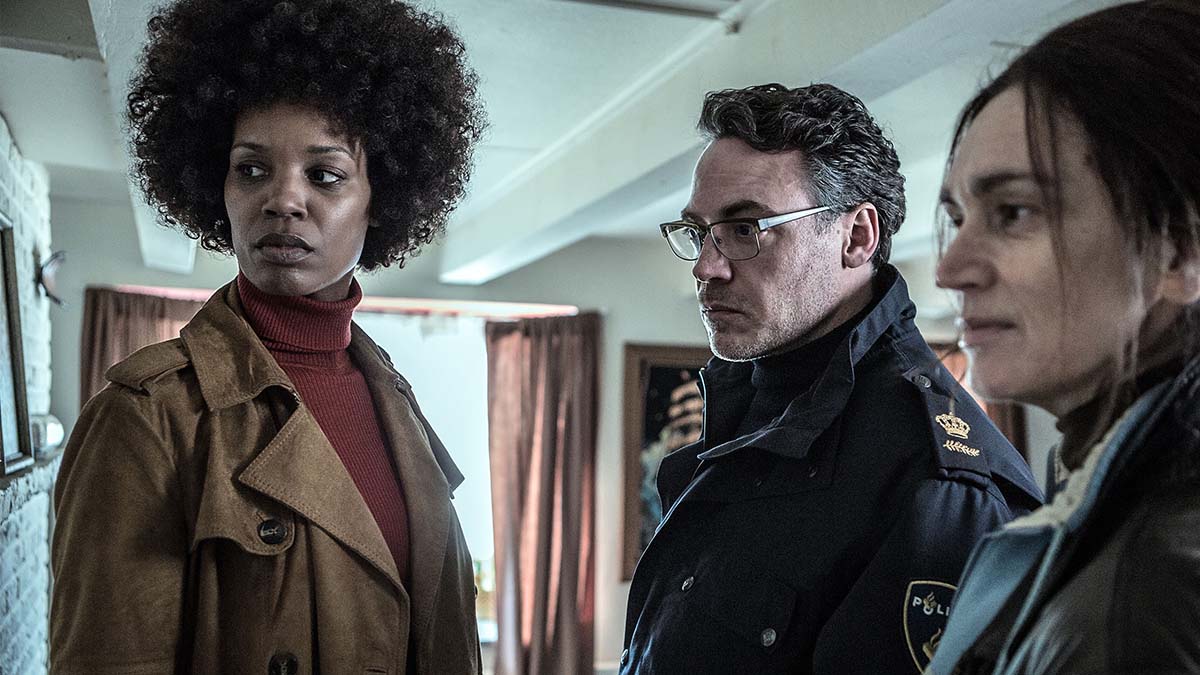 There was a time when tourist authorities would rub their hands together when a crime drama featured their little patch. Imagine what Morse did for Oxford visitor numbers; or Montalbano for Sicily?

Okay, so both examples were tourist magnets anyway, but the TV shows (and books) certainly did their popularity no harm. But today’s crime shows are just as likely to have a detrimental effect on the popularity of the location. The Dutch/Belgian border probably isn’t near the top of your holiday destinations anyway, but if it had been, I suggest you give this new WP show a miss. It’ll put you right off.

‘Floodland’ (or Grenslanders in its original language) is an interesting story about the arrival of a black female cop from Rotterdam into a small rural community in the flat rural wasteland between the Netherlands and Belgium. The location is bleak, but curiously beautiful, too – big skies and vast expanses of mud and water. But the bleakest aspect is not the location, but the local residents, who are a pretty hostile mix of racists, ne’er-do-wells and sexists.

The main draw is the quality of the two leads – Jasmine Sendar as the newly arrived police detective, Tara Dessel; and Koen de Bouw (best known for the excellent ‘Professor T’ series) as psychiatrist Bert DeWulf. Both are fabulous as an unlikely pairing who come together to solve the riddle of how a young girl came to be wandering across the mudflats. She’s clearly traumatised, has no identity papers, and struggles to communicate with the police or DeWulf. And when an abandoned boat reveals a blood-stained interior, it’s clear that there’s a connection between the girl and the boat.

Sendar is fabulous as the detective who has to tolerate hostility from the local community based purely on her skin-colour and gender. Her colleagues are not only unwelcoming, they’re a useless bunch as well – more concerned with organising a farewell party (including female strippers in police uniforms – does that sort of thing still even happen?) for the outgoing detective than worried about the girl or abandoned boat. It’s all fairly implausible, to be honest, but it all makes for an engaging enough show.

Outside of the two main characters, the remainder of the cast are somewhat cliched and unbelievable, too. The police receptionist, for example, is almost comical (unintentionally so) in her attitude towards Dessel . And the outgoing detective, who refuses to even shake Dessel’s hand on her first day, is equally predictable and hackneyed. And that’s a shame, because the storyline, which will centre on people smuggling and human trafficking, is so powerful that the glibness of the peripheral characters is almost insulting to the subject matter.

This is worth watching for Sendar and de Bouw alone – they carry what would otherwise be a fairly nondescript show. Those two, combined with an interesting subject matter, make this a series that’s worth checking out.

Advertisement. Scroll to continue reading.
In this article:Floodland, Walter Presents