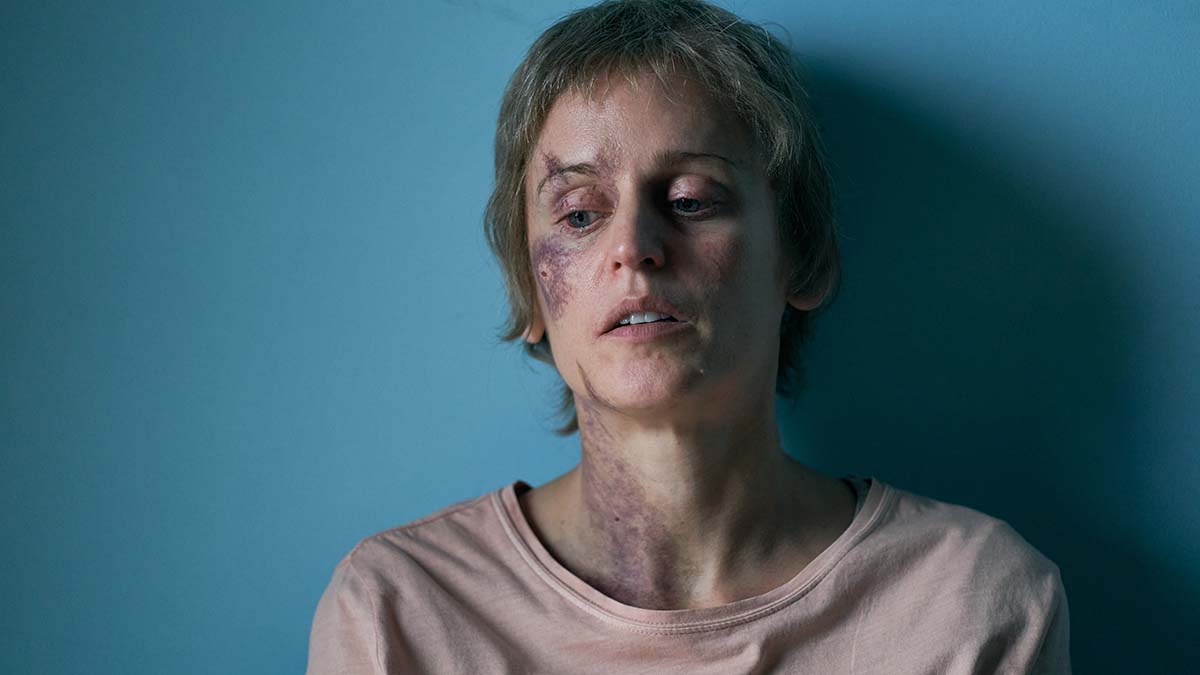 Emma Robertson (Emily Watson) took on the case of a woman who committed a shocking crime in the first episode of ITV’s new three-part drama ‘Too Close’.

If you want to avoid spoilers for ‘Too Close’, stop reading now.

The episode opened with Connie Mortensen (Denise Gough) driving up to a barricade in the pouring rain, with her two children in the backseat. She reversed her car, nearly hitting a stationary vehicle. Waking her children up in the process, Connie put her foot down on the accelerator, crashed through the barrier and landed her car in the sea.

The next morning Emma was having a cigarette out of her bedroom window when her phone rang. She saw that it was her husband Si (Risteard Cooper) and decided to ignore it. He called back again and that time she answered it. Emma lied to Si about smoking and what she’s been doing, and then told him she’s decided to take the Mortensen case. Si insisted they talk about it later and after hanging up, Emma got ready to leave the house.

Arriving at the facility where Connie was being held, Emma was hounded by reporters but she ignored them. She then made her way to see Connie and introduced herself as Connie’s new forensic psychiatrist. Connie wasn’t pleased to see her but let her into her room, and then started to talk about how her life went wrong. Despite trying to intimidate her, Connie was thrown off guard when Emma explained that she needed to assess her to find out why Connie couldn’t remember what happened.

Emma explained what Connie had done and when she mentioned there had been children in the car, Connie looked shocked. Connie then began to taunt Emma who received another call from Si, which she ignored.

Back at home, Emma discussed the case with Si who asked her if taking on the case was a good idea.

Connie had a run in with Addy (Chizzy Akudolu) the next day, one of the care workers at the facility she was being held in. Addy accused Connie of knowing what she’d done and the two were interrupted by the arrival of Emma. Emma sat down and asked Connie if she’d remembered anything, and Connie switched the topic to Emma’s relationship with her husband.

Emma kept things on track and asked Connie what her relationship was like with Ness (Thalissa Teixeira), the mother of the other child that was in the back of Connie’s car on the night of the incident. A flashback saw Connie and Ness meeting for the first time at a playground. Their children were playing together while Connie and Ness shared strawberries. The two seemed to have an instant spark and Connie was surprised to find out that her new friend was a lesbian. Walking home together, Ness revealed she lived just over the road and she met Connie’s husband Karl (Jamie Sives) too.

Continuing her questioning, Emma asked Connie if she was uncomfortable about Ness liking women but Connie crudely made her sexual preference clear. Emma changed tack and told Connie that she wasn’t understanding the gravity of what she’d done. Connie continued to spit out nasty comments about Emma.

After the session, Emma listened to her audio recording as she drove home. We heard Connie continuing to condescend to Emma and make assumptions about Emma’s life. When she got home, Emma continued listening to the audio as she had a glass of wine. Connie talked about Emma’s sex life but Emma was interrupted when Si walked into the kitchen.

Following some small talk about Si’s sister, Si asked about Connie but Emma refused to be drawn on the subject. Emma suggested they went away at the weekend and Si told her that he had plans. Acting out after what Connie had said, Emma initiated sex with Si who replied sarcastically and then they had sex on the kitchen counter. As they had sex, we heard Connie’s voice saying that Emma couldn’t bear to kiss her husband but could have sex with him.

Karl arrived the facility to see Connie but was reluctant to get out of the car and see her. Inside, Connie sat waiting and cried when Karl didn’t show up. Her next session with Emma followed and Connie seemed less confrontational than she had before. Emma asked about Karl and Connie shut her down.

Another flashback showed Connie painting the face of Ness’ daughter. She saw Ness and her wife walk by and then went to speak to her mother, who was letting Connie’s daughter wee in the park next to a tree. Later on Ness asked Connie to paint her face and she noticed that Ness was wearing the same perfume.

During their session Emma tried to ask about the memory we’d seen unfold but Connie asked if Emma and Si had had sex the night before. Emma ignored her and Connie asked to see Ness, which prompted Emma to ask what she wanted to say to Ness. Connie pulled a chair closer to Emma and they role-played with Emma pretending to be Ness. That led to Connie starting to open up and she said she was flattered that Ness had copied her tattoo and perfume. Connie tried to touch Emma’s face and Emma stopped her saying that touching wasn’t allowed. When Connie asked why Emma appeared to be in so much pain, Emma made a hasty exit.

Connie’s solicitor showed her photos of her daughter in hospital and Connie started to laugh. Emma arrived in the middle of it and Connie assured her that her daughter was play acting, which disgusted Emma. Connie then looked at the photos again and her mood changed. She shook her head in disbelief and asked to see her daughter. Within seconds, Connie had a violent breakdown and had to be restrained.

Emma arrived home to the dinner party in full swing. She took her shoes off so she could creep up the stairs and get changed before joining the festivities. As everyone chatted, Emma guzzled wine as the guests started asking her about Connie and joking about the case. Emma excused herself and left the table as the guests continued to crack inappropriate jokes. Si followed Emma to the bathroom and knocked on the door, asking if she was OK. He saw the bruise on Emma’s face and she expressed her unhappiness at the behaviour of their guests. Si dismissed her by saying she had drunk too much and Emma took out a secret stash of cigarettes and smoked out of the window. Emma opened up about what had happened with Connie, then she accused Si of never saying the name of their (presumably dead) daughter.

Nursing a hangover, Emma went to see Connie the next day. Connie asked if Emma hated her, to which Emma didn’t respond. Instead she tried to talk about Karl again and this time we saw another flashback.

Connie took some pills and Karl asked if they were still working for her. Conversation then turned to Karl’s lack of work with Connie assuring him things would pick up soon. Connie confided to Emma that Ness had made her feel alive, and we saw the two women in a car together listening to music. The car broke down so the two women went for a walk and got stoned together.

As they talked, Connie told Ness that Karl had been her professor at university and he was married when they got together. Connie then asked Ness if she’d always been with women, and found out that her current partner was her first same-sex relationship. They started talking about their sex lives and Connie revealed that she sometimes dresses up for Karl to turn him on. It then looked as if the two women were about to kiss.

In the session Connie asked Emma how other people functioned and she got emotional. She asked why the streets weren’t full of wrecked people and that prompted Emma to dash to the toilet to be sick. As Emma was being sick, Connie put on Emma’s jacked and had a look through her phone. She took out the sticker Emma had picked up at the start of the episode and stuck it on her mirror. Emma gathered her things and then noticed that Connie was wearing her jacket.

As Emma left the centre, Karl was also leaving and he got in the car where Ness was waiting. The two held hands, suggesting they might be the ones having an affair.

We then saw Connie pull out Emma’s cigarette lighter, which she lit before looking out of the window.

Read our ‘Too Close’ episode 2 preview

‘Too Close’ continues at 9pm Tuesday on ITV.