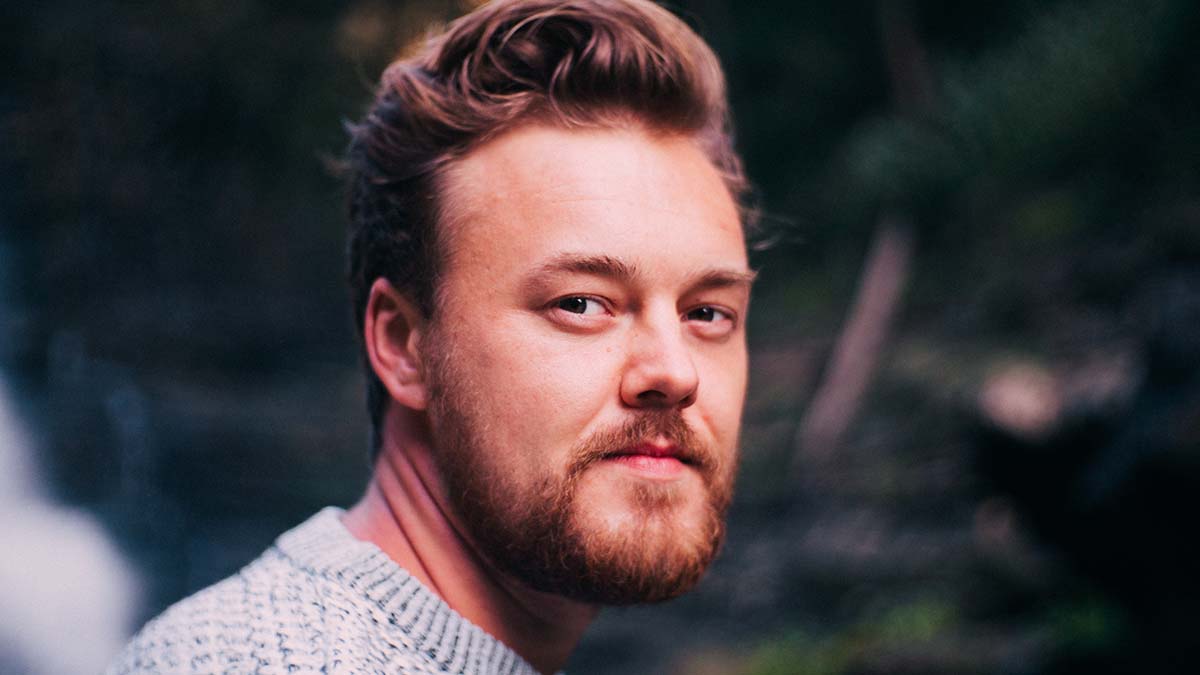 Singer-songwriter Parker Millsap is known for his blend of roots and Americana, with four album releases under his belt to date.

The Oklahoma-bred, Nashville-based artist has pushed himself out of his comfort zone for his fifth album ‘Be Here Instead’, which is released today by Okra Homa Records/Thirty Tigers. The 12-track collection has the classic sensibilities of Millsap’s previous work but lyrically and sonically it’s a step in a bold new direction.

I caught up with Parker to talk about the making of the record, discuss the impact of the pandemic, and to find out about his approach to experimenting with his sound…

Your fifth album ‘Be Here Instead’ is coming out today. It’s a little bit different sonically from what we’ve had before. Tell me a little bit about the inspiration and the story behind the record…

A lot of these songs are different for me, because I wrote them in a different way from how I have in the past. In the past how my songs would usually come about is I would have some sort of specific idea for a story I wanted to tell, or a phrase that I found interesting that felt like a song. I would sit down and whatever that initial concept was, I would just work on it until it felt like I had completed that concept. A lot of these songs came about almost in the opposite way, a lot of these started with the music and many of them almost as musical experiments, just me putting myself in a new situation so that I could write songs from a different place. I don’t know that it was intentional, but I just found myself doing that, like what happens if I try this new weird tuning or if I try to make up my own tuning on guitar and just start bending stuff around. That’s, for example, how ‘In Between’ came about. There are two or three songs on the record that I wrote using the iPad, so I was just using iPad synthesizers and that was all very new to me. I was using that as a musical exploration tool and thought what can I come up with if I use synths instead of an acoustic guitar? The lyrics came later. In the past, usually the lyrics are the first thing that inspires a song, but for these, it was more the music. Later on, as I was working on the music, a melody would pop into my head and I’d be like, ‘what words fit those syllables? I’ve got four syllables in this little phrase, what’s four syllables and sounds cool?’ (laughs) What I found is that I unintentionally ended up doing some soul mining and found out some things about myself that I don’t know, if I’d been aware of before. It was enlightening.

Was this album written pre or during the pandemic?

With the exception of one song, ‘In Between’, I wrote everything prior to the pandemic. We recorded it in June of last year, what we thought was getting close to the end of the pandemic but was actually just the beginning (laughs). I wrote them pre-pandemic but many of them feel maybe even more relevant now having been through this. I’ve had that happen with other people’s songs before where I know a song and I love it for certain reasons and then later on in my life it maybe means something else to me and I hear something else in a lyric. This time, it happened to me with my own songs within a matter of a year (laughs).

With the world being shut down and artists not being able to do the things they’d normally do such as touring, did having time to solely focus on making this record impact it in any way?

Yeah, I think so. For many reasons. Usually, I play songs a lot on tour before they get recorded so by the time we go into the studio, I know at least some people have clapped after a song so I know it’s good enough to go on a record. With the exception of I think one song, I hadn’t played any of this stuff live when we went into the studio so that was different. I wasn’t thinking about the live show, I was thinking about making a cool record. Also, not being on tour, gave us time to rehearse in a more involved way before we went into the studio than we’ve had in the past. I’ve usually toured with a band and played the songs live quite a bit before we go in so the shows are kind of the rehearsal. With this record we did actual rehearsals and put our masks on and opened the windows and went song-by-song, even section-by-section and little musical momentby musical moment, and really tried to make everything really good before we even went into hit record.

You mentioned earlier that you recorded the album last June when we thought the pandemic was coming to an end. How do you feel about releasing this album almost a year on and we’re still in the midst of the pandemic?

It’s bizarre. It’s just been different than how I’ve done it in the past. Like you said, usually, I’m on tour, I’m doing in person interviews, I’m driving to radio stations while I’m on tour and all this stuff. Now, I’m not doing any of that (laughs). I’m doing a few live streams. The day the record comes out April 9th, and then two weeks after that on the 23rd there’ll be some live streams going out with a bunch of the new songs so there will be live versions out there. It’s definitely different and in some ways it feels like it’s going better than it ever has. We’re getting some good press and I feel better about these songs than anything I’ve put out in the past. I feel really great about that but it’s also all happening virtually now.

I feel like this last 12 months has been a real opportunity for artists to get their music heard by people who may not necessarily have listened to it before. Have you noticed any difference with your fan base?

I’ve noticed more younger people listening and commenting on social media than I’ve had in the past. That’s cool. I don’t know what’s driving that. I guess people are spending more time on the internet. Not being on tour has been good for me in that I’ve had to reckon with the parts of myself that have had strangers clap for me, pretty regularly for most of my adult life. Every once in a while, I ask my wife to clap for me just so I get some of that (laughs). It’s been really good to slow down for a while and focus on Parker Millsap the person a little more than Parker Millsap the musician.

I can relate to what you’re saying about finding things out about yourself. I’ve felt the same during the pandemic. It’s been such a strange time…

It’s been really bizarre. I can’t wish anything like this on anyone ever. You’d never wish that the pandemic would happen but there are things that I’ve learned from it that I’m grateful for. I think it’s given us all a perspective shift of how truly connected we are, and how connected we are to each other and our planet, and how that stretches from my buddy bringing me some eggs from his farm, to banking systems, to public policy. I’ve learned a lot because of everything that’s going on, and especially here in America where we’ve seen things not go so well (laughs) to say the least. It’s like eye opening that these big systems do need some work, and we’re all gonna have to put in some work and now we know.

The song I just can’t get past on this record if ‘Now, Here’ because it makes me want a full-on synth record from you. Is that a direction you might further explore in the future?

Yeah, I’ve found that making songs that way was really liberating. I’ve always been in the roots music and Americana world, that’s always the music I’ve listened to and played but the past few years, my tastes have broadened a little bit and my fears have maybe diminished a little bit. I loved making that song. It was almost an accident. I wasn’t thinking, ‘I’m going to go write a sythn song’. It was more just like a ‘what can GarageBand do?’ Within 30 minutes, I had this track put together and I didn’t even play it all the way through. I’m so glad that you said you love how it sounds because it’s all GarageBand synthesizers. It’s all stuff that just comes with iPad. I played a few different chord progressions and copied and pasted them around. I didn’t even play the thing all the way through, I played a chunk of it and then another chunk. I played the synthesizer part that’s an arpeggio but because I was just holding down chords, you can copy that and paste it to a pad sound and that exact same part that you played now sounds different. Most of that song is two or three parts copied and pasted around to different instruments. Then I found lyrics for it. It was liberating. I don’t have to just be the acoustic guitar guy. It’s fun to explore new sounds. A lot of it’s new to me and it was really fun.

What else are you hoping to be able to do this year?

We’re looking at going on tour in September and October here in the States. We’ve got two live streams the day of the album release, and then two weeks after that on the 23rd. We’ll probably try to do a few more live streams in the interim. If we get any festival offers or anything this summer, I’ll definitely take a look at them but right now we’re looking at September and October to tour.

Might we get you over here in the UK next year?

That’s what I’m hoping for. I can’t wait to get back over there. I’m just excited to play this new music for people.

There’s so much variety on this record that I’m really interested to see how this will work in a live show. I feel like we need a big disco loop on ‘Now, Here’…

Yes, we got to figure out how to do that! I’ve never performed with computers and loops on stage. We’ve got a regular band – guitar, bass, drums, keys and violin version – of that song that we’ve been working on but I would really love to figure out how to mesh the two; how to have some of that synth stuff going with the live band playing along. We’ll work on it (laughs).

Parker Millsap’s album ‘Be Here Instead’ is available now. He will be performing ‘A Night In With Parker Millsap’ for Destination Country featuring special guest Morgan Wade on Sunday 11th April 2021 at 8pm BST. Watch the video for ‘The Real Thing’ below:

Advertisement. Scroll to continue reading.
In this article:Featured, Parker Millsap