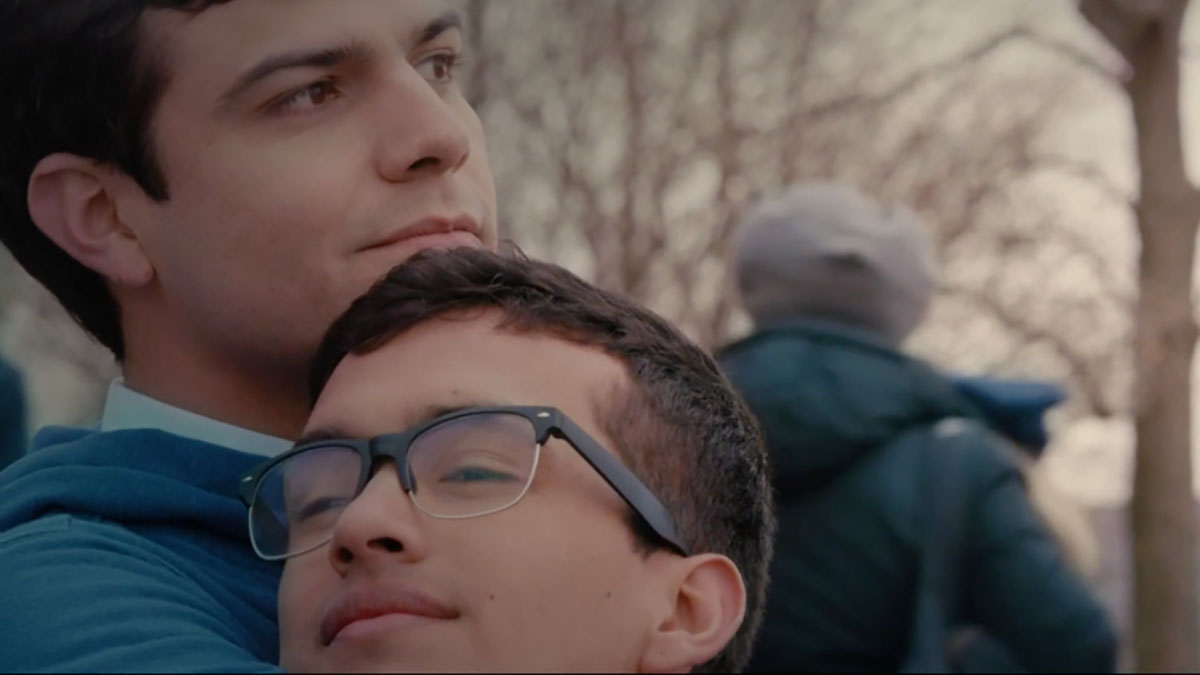 Nowhere from TLA Releasing on Vimeo.

Adrian (Miguel González) and Sebastian (Juan Pablo Castiblanco) are Colombian immigrants living together in New York. Living an open life with their friends and work colleagues, their world is rocked when Sebastian’s visa is rejected and they face having to return to Colombia. Fearful of having to return to their home, where their sexuality isn’t accepted and Adrian’s parents have no idea that he’s gay, the couple enter into discussions to try and find a way to stay in New York. With nothing off limits, the couple are put to the test as they disagree over how to achieve their ultimate goal.

‘Nowhere’ is a timely exploration of immigration in America and the difficulty faced by those who want to make a better life for themselves in the country by moving away from their homes. At the beginning of the film, Adrian and Sebastian appear to be rock solid. They are very much in love and supportive of one another, with Sebastian on the verge of convincing Adrian to come out to his very conservative parents. Things quickly change once Sebastian’s visa is rejected and the lovers enter into a war of wants.

For Adrian, he believes they can live their best life in New York but he gives no consideration to Sebastian’s needs at all. Thinking of himself first, and blindly believing he’s acting in the interest of them both, Adrian’s mind jumps to green card marriages which of course carry with them great legal risk. Sebastian on the other hand starts to contemplate what moving back to Colombia could mean for him, and wonders if it could be as bad as he fears as long as he and Adrian are together. As the two make decisions that affect one another, their relationship begins to crumble.

Writers and directors David Salazar and Francisco Salazar do a fantastic job of creating two very strong-willed characters who, although they are in love with one another, have a complete inability to be able to communicate and listen to one another. Released at a time when America is undergoing significant change thanks to the Biden administration undoing much of the Trump administration’s work over the past four years, immigration in the country is a hot topic. Perhaps if the film had been written under the current administration, the story could have unfolded differently.

The performances of Miguel González and Juan Pablo Castiblanco are the glue that holds the film together. They are believable as a wide-eyed and optimistic young couple, deeply in love and blind to the challenges that hide around every corner. González portrays Adrian as single-minded, with his eye on the ultimate goal of achieving what he believes the couple wants. Castiblanco gets to unpeel a few more layers as it becomes clear that Sebastian’s wants and needs are going in a very different direction to those of his partner.

‘Nowhere’ is a strong film and it will make you think. Anyone who has been through the immigration process in America knows that it’s pretty soul-destroying and nothing is guaranteed. If you have been through it, you’ll be sympathetic to these two characters who want to be part of and contribute to American society, but face losing that over tough immigration legislation. ‘Nowhere’ succeeds as a relationship drama set against the backdrop of a very troubled country, that has spent four years making immigration near impossible.