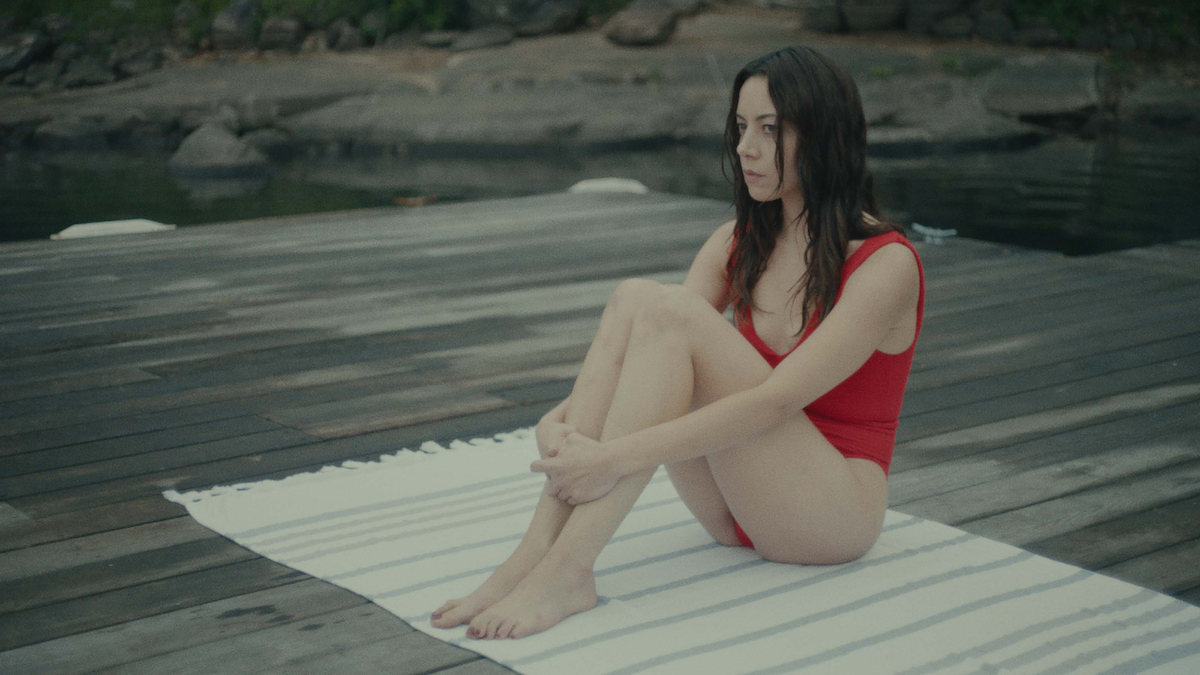 Toxic relationships and writers block come under the microscope in Lawrence Michael Levine’s Black Bear, a staggeringly dark comedy-drama featuring a career best performance from Aubrey Plaza. The film is making its UK Premiere at the Glasgow Film Festival, and we highly recommend you seek it out.

Aubrey Plaza is Allison, a former actress turned filmmaker who is struggling for ideas and inspiration for her next film. To help get the creative juices flowing, she goes to stay at a beautiful lakeside retreat, where she meets the young couple who own the property, Gabe and Blair. After an initial awkward getting to know you session, with each party sizing the other up, they have dinner together and find that wine and weed soon loosen their tongues.

As the evening progresses, and the characters reveal more about their societal, political, and sexual views, a strange mind-game of psychosexual warfare starts simmering under the surface. You can feel it in every barbed compliment, every veiled insult, every snippy contradiction, and every furtive glance. Christopher Abbot and Sarah Gadon as Gabe and Blair are terrific. The performances are excruciatingly convincing.

Then something happens. Something which throws everything we’ve seen so far into a new light. To say anymore would be a spoiler, so I won’t. What I will say, is that Levine takes fairly well-worn territory, and does something spectacularly original with it. Black Bear (the title will make sense when you watch it) evolves from a witty and extremely engaging character piece, into a vivid dissection of art, reality, fiction, and lies.

A methodically structured puzzle box of a film, and brilliantly put together, Black Bear asks important questions about the value of art, and the cost—whether it be personal, physical, or mental—of being an artist. If you are relentlessly searching for authenticity in your art, how far are you willing to go? What are you willing to sacrifice? It might sound highfalutin and pretentious (and it is a bit) but trust me, this film is a blast.

Strikingly lensed by Robert Leitzell, and featuring a gorgeous and atmospheric score from Giulio Carmassi and Bryan Scary, Black Bear is a thrilling cinematic experience. At the heart of it all is a simply mesmerising performance from Aubrey Plaza, who has never been better. It is an Oscar worthy performance.

Unfortunately, I doubt anyone who is actually an Academy member will have seen this film, but rest assured, there will be very few performances this year that rank alongside Plaza’s work here. I cannot recommend this film highly enough. Without doubt my favourite film of GFF, and one of my favourites of the year so far. If you have missed Black Bear at Glasgow, it will be released digitally in the UK on April 23. Seek it out.