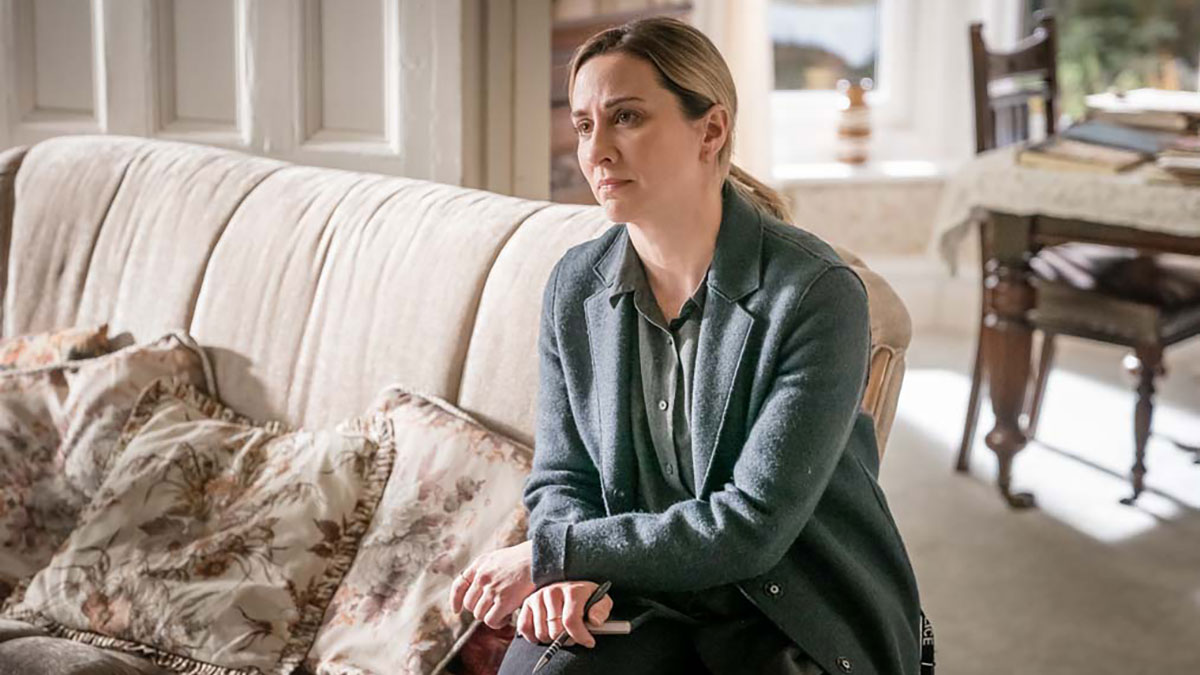 The person behind Stephen Marshbrook’s (Stephen Tompkinson) murder was unveiled in the series 2 finale of ‘The Bay’.

Lisa and Karen (Erin Shanagher) questioned the Russian man with the tattoo that matched the description Oliver (Leo Ashton) had given. When he refused to talk, Lisa showed him that she knew there was a warrant out for his arrest in relation to a murder in Russia. As Lisa went to leave, the man admitted that he was hired to kill Stephen.

Returning home in the morning, Lisa found Andy (Joe Absolom) asleep on her bed. When she asked him to leave, Andy suggested that he make dinner for the family that evening. Lisa was non-committal and didn’t say much as she waited for him to leave.

Tony (Daniel Ryan) was nursing a horrendous hangover following his drunken antics. He sobered himself up and went to see Ellen (Kerrie Taylor) so he could sign their divorce papers. She thanked him and he apologised for letting her down. The estranged couple embraced and Tony tried to hold it together.

Rob (Art Parkinson) and Claire (Ciara Kaighin Adams) saw Josh (Adam Hussain) as they walked to school, and Josh avoided them. Claire urged Rob to speak to Josh and said she didn’t want to be the reason why he fell out with his best friend.

At the station, Lisa informed the team that the man they’d interviewed in Manchester had confessed to murdering Stephen. Karen explained they were trying to find out who hired him as the man had been sketchy in the details he’d given.

Lisa went to Bill’s (James Cosmo) house and questioned Mark (Steve Robertson), who revealed that he’d been in Manchester on one of the days in question. She also told the family they’d arrested someone and Bill celebrated the news by jumping to the conclusion that his business could get back on track. When Lisa said that wasn’t the case, Bill stormed out and Oliver asked if the man they’d arrested was the man who shot his dad.

Rose overheard them and asked Lisa to help her after she’d received a letter from Madeline (Sian Breckin).

Abbie (Imogen King) went to visit Penny (Lindsey Coulson) and told her that she wouldn’t tell Lisa that Andy’s mother had died three years earlier. She told her grandmother that it had been nice having her father around. Penny tried to convince Abbie not to trust him but she was adamant that Penny should give him a chance.

Lisa and Karen interviewed Madeline about the man arrested for Stephen’s murder. She said she hadn’t seen him and that all she wanted was access to her son. After the interview, Lisa was shown footage from a pub that caught Stephen’s killer meeting with Frank Mercer (Owen McDonnell).

Lisa told Tony everything that she knew about Frank as they shared a drive together. Tony asked Lisa to bring in Grace (Amy James-Kelly) and Frank before thanking her for looking after him the night before. He then mentioned that he couldn’t remember everything but asked about Andy, to which Lisa didn’t give much by way of explanation.

Mark and Stella (Sunetra Sarker) chatted about the mess the family was in. Stella suggested that it may be a chance for them to move away from the family and start over. Mark said he couldn’t leave his father and he told her that they couldn’t follow through with her idea.

Bill was seen driving through some tight streets and he went the wrong way down a one-way street. As he realised his error, thanks to a woman shouting through his window, he reversed and crashed into another car.

Arriving at the junk yard, Tony arrested Frank, who told him he was making a mistake. Lisa asked Grace to go to the station with them and answer a few questions.

Mark raced to his father’s side following the accident. He found Bill in a bad mood but once he calmed down, Bill explained to him that he turned a blind eye to what Breakwater was doing with the properties. Bill apologised and Mark assured him that he would handle things moving forward.

Tony took Frank into an investigation room and he and Stew (Simon Mayonda) questioned him. Frank lied that he didn’t know Stephen’s hitman so Tony showed him a photo of the two of them together. He also explained that the man had admitted to murdering Stephen.

At the same time Grace was talking to Lisa and Karen. Lisa asked Grace what she thought of her father. Grace opened up saying that her father imposed lots of rules on her and then she got upset when Karen suggested she wanted her father dead. It was then revealed that Rose was the person who put in a good word for Grace with Frank to get her a job.

Lisa went straight to the Marshbrook house to speak with Rose who confessed that she’d stolen the money from the company. That resulted in Lisa arresting her and asking Mark if he would go to the station with them.

Back in the interview room, Lisa questioned Rose about what she’d done with the money. Rose said she put it in her account and it made her feel better knowing it was there. After Mark was asked how well he knew Frank, he evaded answering the question. As Lisa waited, Mark told her that Frank had made his life a misery when he was younger.

Stew and Tony continued interviewing Frank and they showed him CCTV footage of him giving Stephen’s hitman money. Tony said the hitman had claimed that Frank was the person who hired him.

At the same time, Rose was questioned about Frank by Lisa and Karen. Lisa told Rose that she knew she’d put in a good word with Frank to get Grace a job. Rose said she didn’t know him well and Lisa revealed that Frank was the main suspect in Stephen’s murder. That was enough to get Rose to open up and she admitted she’d had an affair with him.

Tony told Frank that they were interviewing a 48-year-old woman who was helping them. Frank realised that was Rose and he immediately said she had nothing to do with what happened.

Rose was being pressed harder about whether she colluded with Frank to have Stephen killed. She insisted she hadn’t.

Frank meanwhile was telling Tony that he’d tried to get Rose to leave Stephen because he hadn’t appreciated what he had. He said he believed Stephen had a hold over her so he decided to have Stephen killed so he could be with Rose.

Lisa and Karen asked Rose if she had been planning to run away with Frank, taking Oliver with them. She said she hadn’t but Frank painted the opposite picture. That’s when Tony told him that Oliver isn’t Rose’s son, which Frank obviously didn’t know.

Rose told Lisa that Frank was a fantasy for her and that she’d never have taken Oliver away from his father.

Frank asked Tony if he could see Rose and then broke down in tears while Rose admitted that she loved Stephen and would never have left him. As Rose was being cautioned for theft, she saw Frank being led away in handcuffs.

Rob caught up with Josh and invited him to the cinema before telling him that he didn’t feel the same way about him. Josh made a joke about Rob’s hair as Claire arrived and it seemed the friends had buried the hatchet.

Lisa found Rose sitting in the waiting room at the station. Rose blamed herself for what happened to Stephen and she was told that Madeline would likely get access rights to Oliver. Lisa then told Rose that they were looking into the link between Breakwater and the family business, believing that’s what got Med (Taheen Modak) killed. She then asked Rose to get her access to the company files and she agreed to help.

The team investigating Med’s death updated Tony and told him that Bill’s defence team were claiming that he had dementia and couldn’t answer their questions. Lisa interrupted and informed them that Rose was going to make a witness statement. That resulted in the office being raided by the police.

Rose left the police station with Oliver and Grace. Penny arrived as they were going and showed Lisa what she’d found out about Andy.

At Lisa’s house Abbie told Andy that she knew his mother had died three years earlier and she asked him not to lie to her any further.

Lisa went to see Med’s widow Lateesha (Jade Greyul) and updated her on the investigation. Lateesha shared some observations Med had made about her, saying he always believed she did the right thing in the end.

Returning home, Lisa found Andy putting out dinner with Abbie and Rob. She asked him for a word and they went out of the house to talk. As they strolled to the beach, Lisa asked Andy why he was there and he said it was because of his mum. When Lisa told him she knew his mum died three years older, she then asked who Stephanie and Alfie were.

Andy accused Penny of stirring but Lisa insisted that this was coming from her. Lisa said he’d lied to the family and he said he hadn’t, he just hadn’t told them. Lisa asked him if he came back because he’d been kicked out of his home by Stephanie. Andy then turned nasty and called Lisa weak before apologising.

Lisa told him that things with them were over and that he had to come clean to the kids about his other family. Andy insisted he could change but Lisa wasn’t having any of it. She told him to come back to the house and talk to the kids. He agreed to but when they got to the front door, he said he couldn’t and he left as the kids watched through the window.

Sitting down with Abbie and Rob, Lisa explained what had happened and that she’d asked Andy to come back to the house but he left of his own choice. Abbie asked if Lisa was OK and Lisa said she was.

‘The Bay’ series 2 is available to watch on ITV Hub now.