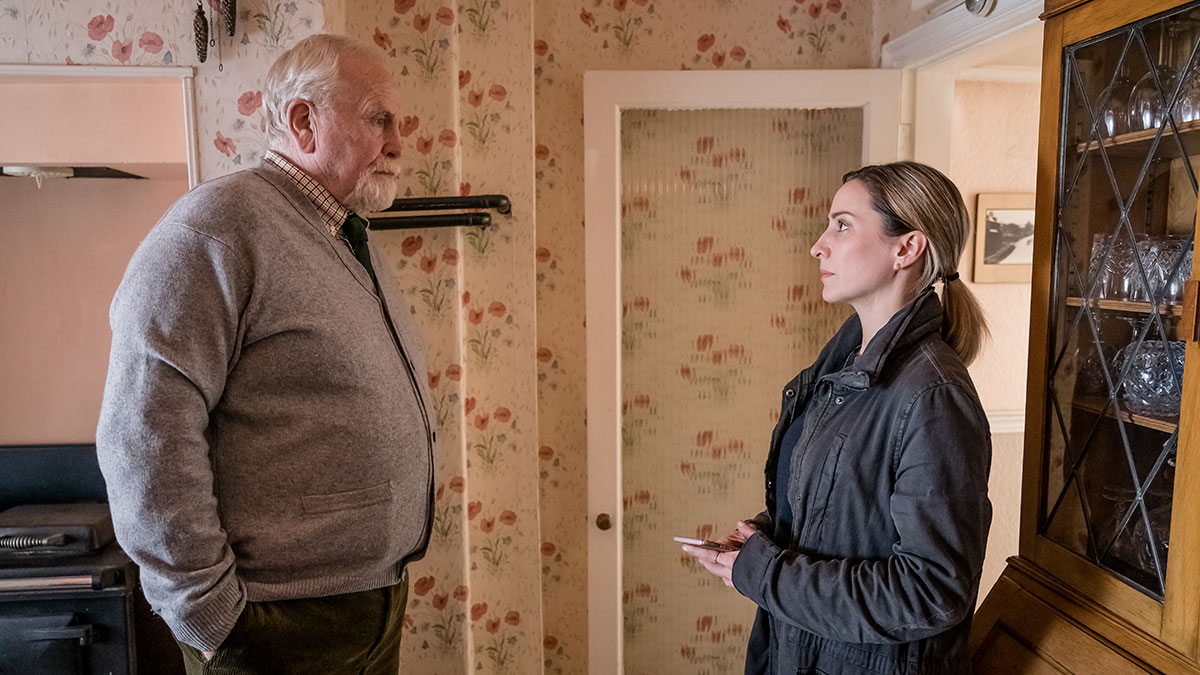 A major break in the case arrived during the penultimate episode of series 2 of ‘The Bay’.

Lisa felt instant regret about sleeping with Andy (Joe Absolom) and asked him to leave shortly after they’d finished. Worried that the kids would find out, she asked him to get dressed and go before they got home. Abbie (Imogen King) spotted her father sneaking out of the house just as she was arriving home. In the kitchen the two women shared awkward small talk before hugging. Lisa then excused herself and went to bed.

The next morning Lisa spotted a message from Andy on her phone as she made her way to work. She ignored it and focused on the investigation. Tony (Daniel Ryan) asked for an update following the bombshell that Oliver (Leo Ashton) wasn’t Rose’s (Sharon Small) son. Lisa also mentioned that forensics had finished with the Marshbrook house so she was going to see if the family wanted access. As the briefing finished, Karen (Erin Shanagher) realised that Lisa looked distracted and asked if she was OK.

Speaking with Rose, Lisa asked if she wanted to return to the family home. Initially reluctant, Rose said she would go but Lisa warned her that the house wouldn’t have been cleaned up since Stephen’s (Stephen Tompkinson) murder. The two women went to the house and Lisa told Rose that she could leave at any time if it got too much. As Rose saw Stephen’s blood in the hall, she began to panic and Lisa reassured her.

Rob (Art Parkinson) was greeted by Josh (Adam Hussain) at a café, and Josh didn’t realise that Claire (Ciara Kaighin Adams) was going to be there. That created an awkward silence and Josh quickly left.

As Rose was tidying in the house, Lisa asked why she’d never disclosed that Oliver wasn’t her biological son. Rose said that it didn’t seem important but stressed that Oliver didn’t know. Lisa then revealed they’d been speaking to Madeline (Sian Breckin) who was helping with the investigation. Rose admitted that only her father knew the truth about Oliver and she asked how Lisa had found Madeline. Lisa explained that Madeline and Stephen had been in touch about access to Oliver, and that revelation shocked Rose.

Bill (James Cosmo) returned home with the family after walking the dog and wasn’t happy to find Madeline waiting in her car for him.

Rose and Lisa returned to Bill’s home and Rose wasn’t happy to see her. Lisa explained why Madeline couldn’t be at the house and told her that she’s a person of interest in the murder Madeline said she wanted to see her son but Lisa guided her out of the house and back to her car. As Madeline left, Lisa got a call from Tony saying they needed to talk to Bill about Breakwater so Lisa brought him in.

On the drive to the station, Bill talked about Madeline saying she was ‘trouble’ and ‘unstable’. He told her that Stephen had employed her and that he was a poor judge of character.

At the station Bill was taken into an interview room where Tony and Lisa questioned him about Breakwater. Bill said he’d first got involved with them over a decade earlier and Tony asked if he was the company secretary. Lisa stepped in when Bill kept saying ‘our’ and mentioned that he’d previously told them it was Stephen’s account. Tony then asked about Liam Spalden, the company director, and Bill refused to answer any more questions until his lawyer was present.

Rob caught Josh and questioned him about why he’d left the café. Josh evaded the question and Rob told him that he’d find someone, thinking that him having a girlfriend had been the issue. Josh told Rob that he had feelings for him, which caught him by surprise.

Accompanied by his lawyer, Bill resumed answering Tony and Lisa’s questions. Tony started digging into why properties were valued at one price yet sold for substantially more. Bill tried to brush the questions off and Lisa asked if he’d considered that the properties could be used for money laundering and illegal doings. When Bill’s lawyer stepped in, Tony asked about the due diligence he would have done around Liam but he remained silent. Tony then told Bill his assets had been frozen and asked again about Liam.

When Bill stayed silent, Tony revealed that Liam had been dead for 16 years and asked why Bill had signed papers on behalf of a dead man. Bill’s lawyer said the documents were illegally obtained and ended the interview. Lisa asked Tony where he’d got the information from and he told her it was from Lyn’s (Wendy Kweh) hard drive so it would be inadmissible.

Abbie was met after work by Penny (Lindsey Coulson) who took her for a chippy tea. Penny asked about Lisa and Andy and noticed that Abbie was hiding something. Abbie told her grandmother that she’d seen Andy sneaking out of the house and when Abbie suggested he might have changed, Penny told her that Andy had lied about coming back for his mum’s funeral as his mum had died three years earlier. Abbie asked if Lisa knew and Penny said she hadn’t told her yet.

Tony briefed the team following Bill’s interview. Lisa pointed out that Mark (Steven Robertson) had told them his father knew more than he was letting on and Tony told the team they needed a new way to break the company. He also told the team not to update Pearson, claiming he would do it.

Abbie called Andy and asked to meet him. She questioned him about missing her grandmother’s funeral and asked where he’d been before he returned. Andy said he’d been in Stoke but wouldn’t give any other details. Abbie asked if Andy had come to see them and then asked about Lisa. Andy started talking about how he and Lisa met.

Stella (Sunetra Sarker) found out about Madeline’s return from Rose, who got very upset as she talked about it. Bill interrupted them and confronted Mark, accusing him of giving the documents to the police. Mark denied it and when Bill told him they had files from the office, Mark looked shocked.

Tony had a row with Pearson about the illegal evidence he had tried to use. Lisa meanwhile was at the law office trying to get Lyn to make a statement so they could use the documents she gave to them. Lyn said she needed her job and she reminisced about her relationship with Stephen. When Lisa suggested they’d been close, Lyn shut her down.

Back at Bill’s house Mark and Bill were arguing. Mark asked why Bill had chosen Stephen and not him. Bill explained that he made Stephen partner to protect his son so he wouldn’t be liable for the illegal dealings he’d done. Rose asked for an explanation and Bill told the family that he had been trying to save the company. Bill admitted he didn’t know if that was the reason why Stephen was murdered.

Rose spent time with Oliver and she told him that she loved him, and so did his father. She then decided to tell him about his real mother but chickened out and pretended she wanted to talk to him about moving house.

Tony was sat outside his home in his car and he received a call from Lisa, who told him that Lyn wasn’t going to come forward. Lisa asked if Tony was OK and he pretended he was before hanging up. He got out of the car and tried to let himself into the house, only to find the locks had been changed. Ringing on the doorbell and knocking on the door, Tony eventually got a response from Ellen (Kerrie Taylor) who let him in. The couple had a row and Ellen told Tony that his work had always come before everything else. Tony got upset and Ellen once again asked him to sign their divorce papers.

Lisa and Karen discussed Madeline and it had been discovered that she was paid off when she announced she was pregnant. Karen shared Oliver’s birth records and it painted a picture that Stephen had been playing both Madeline and Rose. Karen suggested that Madeline had a strong motive for killing Stephen.

Tony drowned his sorrows in a bar and he got into a confrontation with a fellow drinker.

The police stopped a car whose tail light wasn’t working. It turned out the car had been stolen and the man inside it tried to run away. He was reprimanded by the police.

Lisa was called by the bar that Tony was in and the owner asked her to come and get him. Before she did, she called Andy and picked him up to help her. Lisa found Tony drunk at a table. When she and Andy picked him up, he smashed a glass and they dragged him out, putting him in the back of Lisa’s car.

They took Tony back to Lisa’s flat and settled him on the sofa. Lisa then got upset and rounded on Andy, asking why he was there. She then questioned why she’d called Andy to help before revealing that her life, personally and professionally, was a mess. Lisa started crying and asked Andy again why he was there.

Tony’s phone rang and Lisa answered it. Karen was on the other end and Lisa dashed off to meet her. Arriving at a police station in Manchester, Lisa and Karen were faced with the man that murdered Stephen.

‘The Bay’ concludes at 9pm Wednesday on ITV. You can watch the full series now on ITV Hub.