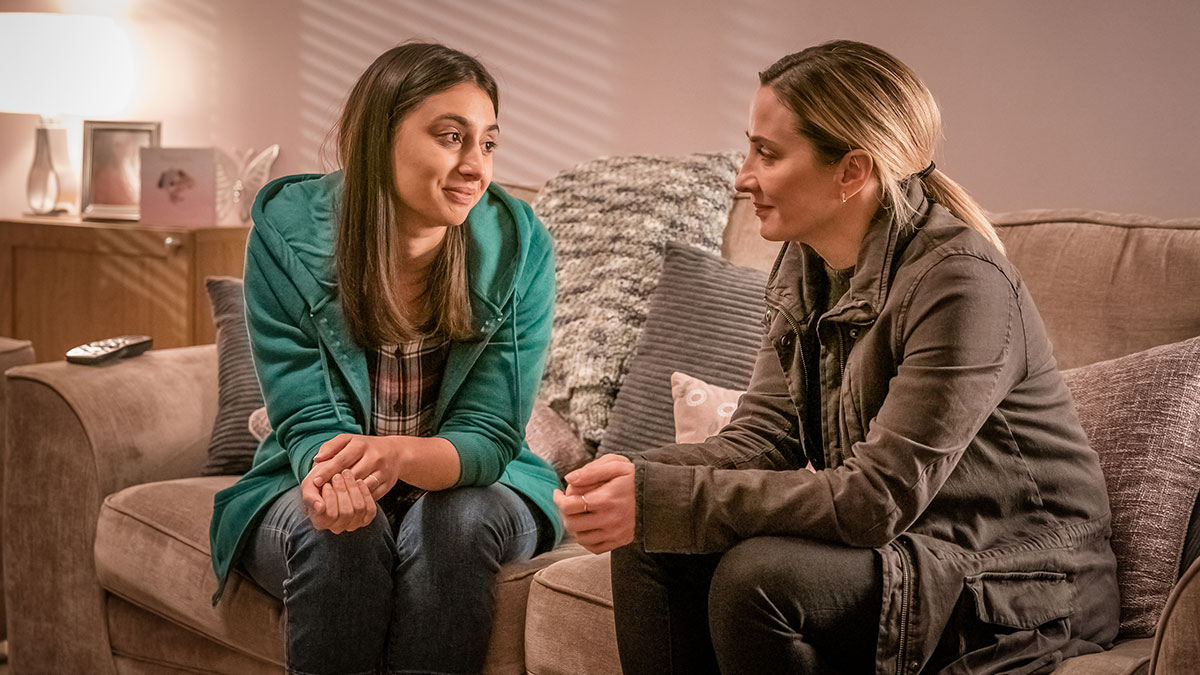 Did Med (Taheen Modak) survive being run over on the last episode of ‘The Bay’? We got the answer in tonight’s episode.

Lisa (Morven Christie) rushed to Med’s side as paramedics tried to revive him. As the paramedics called time of death, Lisa refused to believe what she was hearing and she broke down with Tony (Daniel Ryan) and Karen (Erin Shanagher) looking on in shock.

As Med’s body was loaded into an ambulance, Lisa zoned out. Tony called out to her and the two left the scene and went to Med’s house. Before they got out the car, Tony asked what Med was doing before he was killed and she explained he was looking into a lead on some properties.

Getting out of the car, Lisa and Tony approached Med’s front door and Lateesha (Jade Greyul) opened the door. Tony struggled to explain why they were there and when Lisa asked if they could go inside, Lateesha realised what had happened and she broke down. Lisa embraced her and spotted Med’s child walking around in the house.

At the station, Tony asked again why Med was there and explained to the team that an outside team would be investigating his murder. Tony then dismissed everyone and told them to go home and be with their families, highlighting that this was no longer their investigation.

A despondent Lisa returned home where Penny (Lindsey Coulson), Rob (Art Parkinson) and Abbie (Imogen King) were waiting. Penny explained she’d heard about everything on the news and she hugged her daughter. Meanwhile, Tony called his wife Ellen (Kerrie Taylor) to tell her about Med and he told her that he just wanted to hear her voice. She asked if he would be OK and he assured her he would be fine.

The next day the police raided one of the properties that Med had been investigating and they found a drug den.

Lisa arrived at work, still visibly upset and shaken. She saw the new team taking items from Med’s desk before joining a team meeting where Tony offered compassionate leave to anyone that needed it. Tony introduced the lead of the new team, Pearson, and assured them that they would bring the people responsible to justice.

Eddie (Thomas Law) explained what Med had been doing and when he got to the property where Med was killed, he struggled to continue. Stew (Simon Mayonda) took over and finished the update. D.S. Emma Ryan (Zaraah Abrahams) continued to update the team and Tony pointed out that they have proof that the family law firm had been dealing with properties linked to drug dealing. It was also revealed that Jamie (Jack Archer) and Theo (Arian Nik) had been located back at their home, and they’d agreed to co-operate with the investigation. Lisa found out that she would be taking over Med’s role moving forward.

Penny paid a visit to Imogen to discuss looking out for Lisa in the wake of Med’s death. She also asked about Andy (Joe Absolom) and Abbie mentioned that she hadn’t seen him. Andy was then seen in a café where he heard about the death of Med and he left Lisa a voicemail offering his help and support.

They were interrupted by Grace (Amy James-Kelly) and Frank (Owen McDonnell). Grace was welcomed warmly by Stella (Sunetra Sarker) and Rose (Sharon Small) but Bill (James Cosmo) wasn’t pleased to see either of them.

On her return to the station, Lisa was pulled into an interview room with Jamie. They questioned him about lying about the dates they arrived home and when asked why he and Theo took off, Jamie said he was worried about losing his boyfriend. Jamie told them Theo had threatened to go with or without him so he decided to join him. Lisa turned the questions to Jamie’s relationship with Stephen and Jamie said he loved his father but he wasn’t sure the feeling was mutual. Jamie explained how his father had never accepted his sexuality.

Theo was questioned next and he told Lisa and Tony that he had wanted to get Jamie as far away from his family as possible. He also said that Jamie shuts down at any sign of conflict and that he couldn’t handle it.

Stella visited Mark (Steven Robertson) at work and the two had a hushed conversation about Mark taking over the firm. She urged him to leave Breakwater alone.

The car that killed Med was found burned out in the middle of nowhere. Lisa observed Tony speaking with Pearson, and Pearson was questioning why Med was investigating the properties. Tony slipped up and said Med was looking into it on his own initiative but then changed his story to say he had instructed him to do so.

Stew told Lisa there was someone at the station to see her and she found Mark waiting outside saying he wanted to talk to her.

Karen, Eddie and James (Andrew Dowbiggin) went to the hotel to see if they could find out any information about Stephen’s mystery woman. While in one of the rooms, Eddie broke down as he told Karen he was to blame for giving Med the lead on the properties.

In the interrogation room, Mark told Lisa that he burned the papers found in the BBQ as they were related to Breakwater. He said Stephen was working on the case and he thought something shifty was going on. Mark explained that he was going to talk to his father about the papers on the day of the BBQ and admitted he burned them because he panicked. When Lisa asked why Mark was coming clean, he said that he wanted whatever dodgy dealing Stephen was doing to come to an end. Tony and Lisa asked about Mark’s relationship with Stephen and Mark became agitated when it was suggested Stephen was favoured by Bill. Lisa asked what Bill had said about the papers that he burned and Mark said he believed his father already knew.

Lisa went to speak to Bill and he denied all knowledge. She returned to the station and Pearson asked her for a word. Pearson asked about her relationship with Med and Lisa told him they had a good working relationship. When Lisa felt Pearson was asking leading questions, she jumped to Med’s defence and was caught off-guard when Pearson asked about Tony. Lisa stayed silent and Pearson kept pressing about Tony’s personal life. Eventually Lisa said that Tony kept his private life private and never let it interfere with work.

Back at the hotel, Karen took in some air on the balcony while James had a drink in the bar. He kept an eye on reception to see if the mystery woman tried to check in. James called Karen to tell her they were wasting their time and then the woman turned up. As she made her way up the stairs, James followed her. As she entered the room, Karen explained that they needed to speak with her.

The mystery woman, Madeline, was taken to the station where Lisa questioned her. She explained she used to work at the firm a decade earlier and she admitted she’d had an affair with Stephen. Lisa and Karen told her they knew that she’d contacted Stephen and Madeline revealed that Oliver was her son.

Lisa briefed the team and explained that Madeline had battled her mental health and Stephen used that to take Oliver away from her. Tony instructed Lisa to find out how much the family knew. Stew updated the team about the latest on Breakwater.

Tony asked Lisa how she and Med didn’t know about Oliver and she insisted there was no way they could have known. When Tony told her to go home, Lisa stepped into his office and Tony opened up about his marriage but insisted everything was fine.

Andy called Lisa again and offered to help out. She told him she couldn’t talk and hung up the phone. Andy then went to the house with bags of food and lied to Abbie and Rob that their mother had asked him to make their dinner.

Penny called by the house and Andy answered the door. Andy lied to Penny telling her Lisa called him to look after the kids and he invited her in to join them. Penny said no and Andy rudely closed the door in her face.

Lisa went back to see Lateesha. The two had a chat and Lateesha told Lisa that Med talked about her all the time.

When she got home, Lisa found Andy in the living room. She asked what he was doing there and where the kids were. Andy explained they’d both gone out and then he offered to look after Lisa. She told him it was a bit late for him to offer that but he persisted and she relented. Andy asked about her day and she told him she didn’t want to talk about it. He cracked a joke and the two laughed.

Tony went home and Ellen said unless he was there to sign their divorce papers, she had nothing to say to him. Ellen slammed the door in his face and Tony left.

Following dinner, Andy comforted Lisa and gave her a beer while they talked. Lisa broke down as she asked Andy what would happen to the kids if it had been her that was killed. The two hugged and then Andy made a move on Lisa, which she reciprocated.

‘The Bay’ continues at 9pm Wednesday on ITV. You can watch the full series on ITV Hub now.