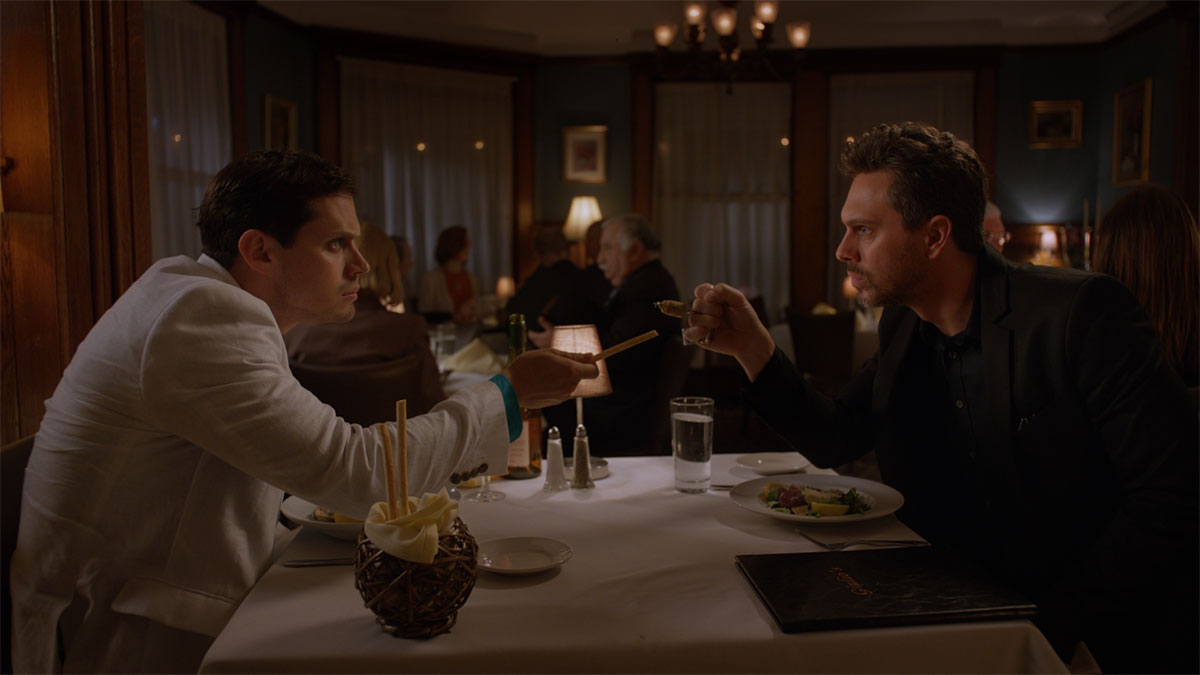 A man (Thomas Sadoski) starts to believe that his new friend (Jake Robinson) who he’s working alongside him on the town newspaper might be a sociopath. Known only as The Narrator and The Kid, the two men get locked into an unspoken battle with The Narrator attempting to prove that The Kid is mimicking him and lying about his own life.

‘The Mimic’ is the latest film from Thomas F. Mazziotti and it’s an existential comedy in the vein of ‘I Heart Huckabees’. Giving no names to any of its characters, and for the most part concentrating solely on two characters, the film could easily be translated into a play. With fast-paced dialogue and quick exchanges, there’s a lot to take in over a short space of time and I’m fairly sure the film will sail over a lot of people’s heads.

Mazziotti injects sophisticated and nuanced dialogue into the mouths of The Narrator and The Kid, who spend much of the film swapping observations about one another and questioning what they know of each other’s lives. The Narrator is convinced that The Kid is unable to be an individual in his own right, instead believing that The Kid is basing his very being on him. Shot in almost episodic scenes, there’s no particularly strong plot that binds the film together so it’ll very much depend on if you buy into the bizarre ride that unfolds.

It’s difficult to truly categorise ‘The Mimic’, which will make it difficult for audiences to appreciate it. On the one hand it’s appealing to an intelligent audience that likes to ponder yet on the other it’s trying to pass itself off as a comedy. Quite honestly, I’m not sure it really succeeds as either. There’s not enough plot to please the viewer and it’s not actually all that funny, but you feel it really ought to have been.

What can’t be criticised is the performances of Thomas Sadoski and Jake Robinson. Both actors are excellent in their respective roles and they throw themselves into Mazziotti’s bizarre world. Whether or not they themselves had any clue what was going on while they were making it is a moot point, but they spar well on screen and make for an entertaining duo. I just wish that they’d had more character to work with.

‘The Mimic’ tries everything it can to keep you off-balance and for most people it’ll succeed but in the process it may put them off. The material here is packed with ideas but it doesn’t really tell a cohesive or coherent enough story to get the audience to buy into it. I’m all for a wacky film that’s trying to do something a bit different but for me, ‘The Mimic’ never really finds its feet.