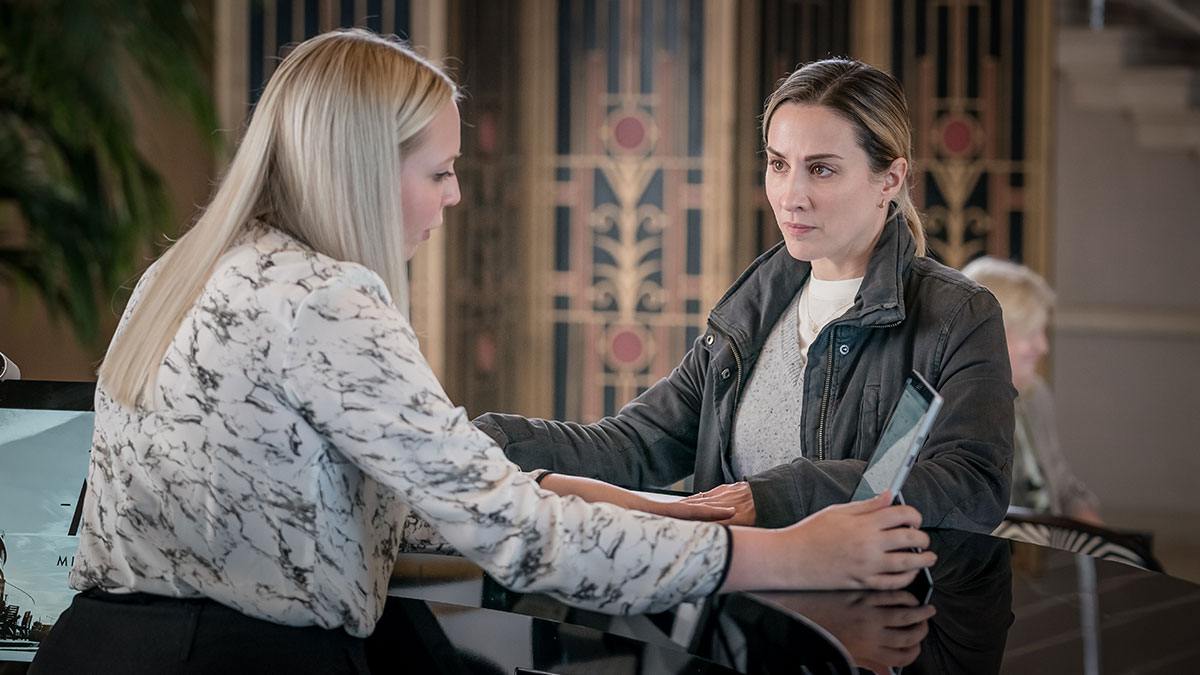 Lisa (Morven Christie) was pulled between family and work during the latest episode of ‘The Bay’.

Stew (Simon Manyonda) presented bank statements to the team that showed Rose Marshbrook’s (Sharon Small) being paid into an account in Stephen’s (Stephen Tompkinson) name. Tony (Daniel Ryan) instructed the team to dig deeper into Stephen’s life to properly understand the relationships he had with those around him.

Bill (James Cosmo) stood outside his house looking at the sea when he was joined by his son Mark (Steven Robertson) who told him he had hard copies of the Breakwater Account on the day of the BBQ. He told his father he was going to show them to him because they implicated Bill in something but he burned them to stop anyone getting their hands on them. Bill said he did the right thing and told his son to ‘leave it’ so they can concentrate on supporting Rose and Oliver (Leo Ashton).

Med (Taheen Modak) was settling Rose back into her father’s home when Lynn (Wendy Kweh) turned up with some papers that needed signing. Bill revealed he was no longer retiring and would be returning to work. Stella (Sunetra Sarker) told Bill he was in no fit state to go back to work, which kicked off a row. Mark tried to drag Rose into the argument but she refused. Bill then rounded on his family before showing Rose and Oliver to their room. He told his daughter she was the only person that never asked anything of him.

At the station Karen (Erin Shanagher) and Tony continued to question Cass (Kelcie Atkinson) asking who paid her to dump the gun. Cass said she didn’t know who had hired her because they only communicated on the phone. When Tony showed her the phone, Cass revealed it was a man and she had been doing errands for him. She said he’d never asked her to move a gun before and that if she’d known she would have told someone. Cass did admit she moved the gun as she thought that’s what she needed to do.

Lisa caught up with Rose as she unpacked and questioned her about her wages being paid into Stephen’s account. Rose said she was terrible with money so Stephen looked after the finances and she did everything else. Lisa turned the questions to money missing in the business and Rose dismissed it as Stephen being paranoid.

Downstairs Med questioned Jamie (Jack Archer) about why his father, Stephen, was made a partner but not Bill’s own son Mark. Jamie suggested that Mark wasn’t trusted by the family and as he explained why he didn’t want to join the family business, he was interrupted by Theo (Arian Nik) who asked when the body would be released.

Outside the house, Lisa sat down with Mark and questioned him about what was going on with Bill. When she asked if it was dementia, Mark admitted they didn’t know and that Bill refused to go to the hospital to be checked out. Mark grew angry that he and Stella had the burden of looking after Bill. He told Lisa they were living there temporarily but were building their own house. Lisa picked up that Mark may have money troubles and he said money was ‘always tight’.

Penny (Lindsey Coulson) got her partner to call Andy (Joe Absolom) to pretend to be a prospective customer. He arranged for Andy to come and look at his roof.

Andy turned up to the house and was confronted by Penny. She offered to pay him to leave for good and he considered an offer of £5,000 before telling her he wouldn’t be leaving. Andy also dropped the bombshell that he was seeing Lisa and the kids that night.

Lisa stopped by Stella’s salon and made small talk. Stella said the family she married into had sucked her in and she spent most of her time looking after them. She told Lisa that Stephen had pushed Mark out of the picture by sucking up to Bill. When Lisa asked if Stephen had tried it on with her, Stella said he hadn’t and admitted that Rose would have ignored any inkling of him having an affair. Stella also said that Stephen wasn’t approving of Stephen’s sexuality.

Med visited his wife Lateesha (Jade Greyul) who worked in real estate. He asked her to check the properties he was investigating and she confirmed that it had been sold for a lot more than it was worth.

Lisa arrived back at the station and caught up with Med, who revealed that all the properties had sold for more than they were worth. Lisa offered to help and when Med realised she was avoiding going home, he told her he was fine to do the work on his own.

Abbie (Imogen King) and Rob (Art Parkinson) arrived at a café with Lisa where Andy was waiting. The four of them sat down and a waitress brought them menus. Andy asked what everyone fancied eating and Abbie said she wasn’t hungry and called him by his name rather than ‘Dad’. That made him angry but Lisa couldn’t hide a smirk.

The family meal seemed to be going better until Andy incorrectly remembered something, which Abbie set him straight him straight on, causing an icy silence.

Med’s investigation led him to the Breakwater Development Group. He found a contact number and called it to find that the number wasn’t in use.

Outside the restaurant, Andy said goodbye to the kids and they got in the car while Lisa chatted with him. Andy revealed that he’d seen Penny and she’d offered him money to leave but he’d refused. Lisa’s next stop was to see her mother and they had a row about what Penny had done. That escalated into a row and Lisa told her mother that she had no say in whether her children had a relationship with her father. Things escalated further as the two women through insults and past baggage at one another. Penny warned Lisa not to come running to her when things went wrong with Andy again.

Jamie rebuffed Theo’s advances telling him that he didn’t want to get frisky while at his grandfather’s house. Theo didn’t give in but Jamie told him no before walking off.

The team gathered for a meeting to update on their latest findings. Stew talked about a series of texts they found on Stephen’s phone, which suggested he was being harassed. DC Eddie Martin (Thomas Law) said he’d pinpointed the texts to a hotel.

Lisa headed straight over to the hotel to get the list of guests who were there the night Stephen was receiving the text messages. In the guestbook, Lisa noticed that someone had signed in as ‘Mrs Marshbrook’. Lisa asked if there was CCTV but the receptionist explained it was deleted every 3 days. There was a lead however when the receptionist mentioned Stephen had a booking for the next evening.

Returning to Bill’s home, Lisa asked Rose where she was the Thursday before. Rose confirmed that she was at school for a parent’s evening before saying that Stephen was always working late with Lynn. Lisa’s next call was to see Lynn to check if Stephen had been working late with her that night. Lynn checked the swipe out system and confirmed he had left at 6pm, as usual. Lisa asked where Stephen might entertain clients and Lynn confirmed it was the hotel but denied she’d gone there with him.

Theo interrupted Jamie playing with Oliver and when Rose told her son that his father loved him, Theo rolled his eyes and shot Rose a severe look.

Lisa reported her latest findings to Tony who suggested that Stephen’s mistress wouldn’t turn up to the hotel if she knew Stephen was dead. Lisa said it was worth going to the hotel to check. Eddie interrupted with a lead that took the team back to the scrap yard that Grace (Amy James-Kelly) worked at.

They headed to the scrapyard and Grace wasn’t there but they did find the lorry driver they were looking for, who said he was with Frank (Owen McDonnell), the owner of the yard. That meant that Frank had lied about his whereabouts. Lisa and Med quizzed Frank and he realised they’d caught him in a lie.

Lisa was instructed by Med to stay at the scrapyard while he went in search of Grace.

At the Armstrong house, Abbie gave Rob some money for his date. He took the money and asked her to wish him luck. Abbie watched as Rob got into their father’s van.

Lisa questioned Frank about why he’d lied to them and he insisted Grace hadn’t done anything. As Frank was talking about having a dislike of Mark that traced back to their youth, Grace showed up.

Andy dropped Rob off on the sea front for his date and tried to give him some fatherly advice. Rob was nervous but his date went well.

Following Grace’s return, Lisa called Med to inform him and Med told her he was still looking into the properties that had sold way above what they were worth. Med entered a building site and all the workers scarpered. He found someone to speak to but he refused to give him any information.

Grace was questioned about employing the lorry driver who was an illegal immigrant. She handed over paper work for the scrapyard saying she had nothing to hide. When Lisa brought up Grace’s arrest for stealing a car, Grace told her that she covered for Jamie so he didn’t ruin his chances of becoming a lawyer.

Stew called Lisa to tell her the CCTV checked out for Frank but dropped the bombshell that Jamie and Theo were already in the country for two weeks before Stephen was killed.

Med continued investigating the properties and he was spotted by someone from the upstairs window who called the man that fobbed Med off earlier.

Lisa went back to Bill’s house to speak to Jamie to find that he and Theo, and all their stuff, had gone. She called Med to tell him that Jamie had gone and as he was on the phone to her, he was hit by a car and left for dead in the middle of the road. As he reached for his phone, the car reversed over him as Lisa desperately called for help.

‘The Bay’ continues Wednesday at 9pm on ITV. You can watch the full series on ITV Hub now.