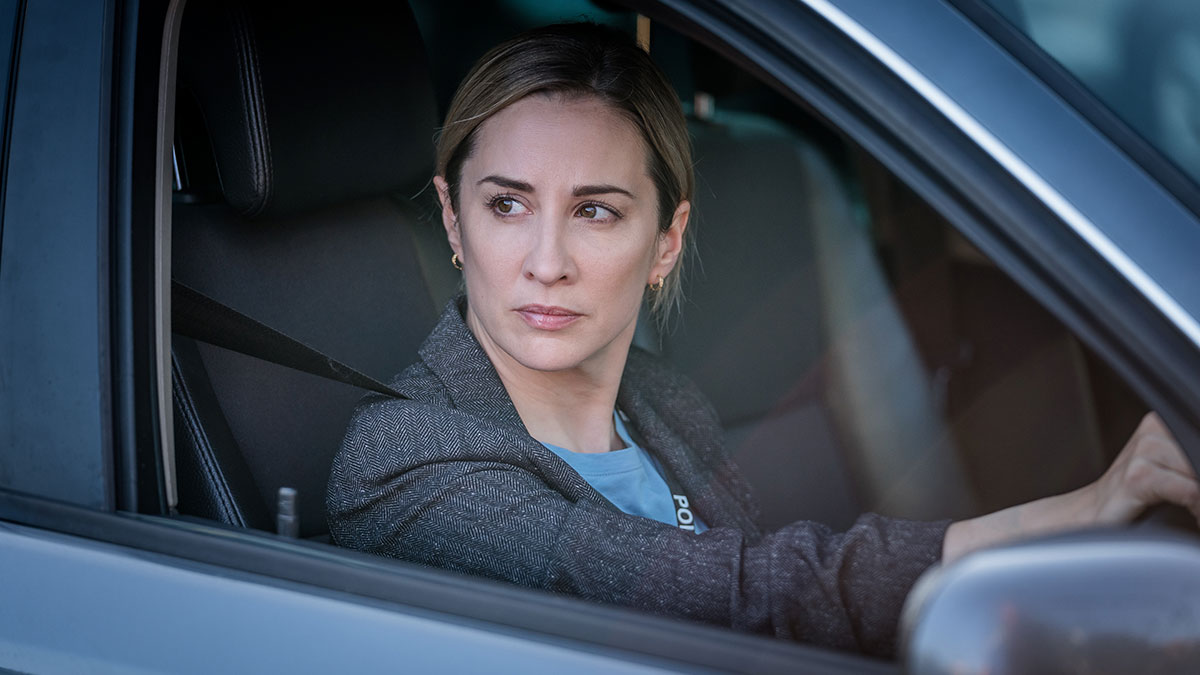 DC Lisa Armstrong (Morven Christie) returned to ITV tonight as the second series of ‘The Bay’ got underway.

The episode opened with a child sat in the back seat of a car, staring out of the window observing what people were doing outside their homes. The car pulled into a house where Rose Marshbrook (Sharon Small) was waiting for her husband Stephen (Stephen Tompkinson) and son Oliver (Leo Ashton) who were inside.

The family gathered for the retirement party of Rose’s father Bill (James Cosmo) with Rose’s brother Mark (Steve Robertson) and his wife Stella (Sunetra Sarker) in attendance. Bill dismissed Mark’s questions about the family business, telling him to take anything he needed to up with Stephen.

Inside the house Oliver was sat on the stairs when there was a knock on the door. A delivery man asked for Stephen so Oliver ran into the garden to get him. When Stephen got to the door, the man waiting pulled out a gun and shot him in the head, and then again in his body while Oliver looked on in horror. We also saw a small tattoo on the inside of the man’s wrist.

Our first glimpse at Lisa this series saw her talking to a woman whose roof had been vandalised. She then returned to the station and was overheard complaining by DI Tony Manning (Daniel Ryan). Med (Taheen Modak) arrived at the station with a large teddy bear and was called to assist Tony to investigate the shooting. Tony invited Lisa along but warned Med that she was on probation and if she put a foot wrong, he wanted to know about it.

Arriving at the Marshbrooks’ house, Tony saw Stephen’s lifeless body through the doorway before making his way to the garden where the family was in shock. Tony told Med to get statements from everyone and he and Lisa found Rose distraught. When Lisa comforted Rose, Med looked annoyed and Lisa stopped what she was doing. The family introduced themselves and Rose told Lisa that Oliver had seen what happened.

Outside the house DS James Clarke (Andrew Dowbiggin) informed Tony, Lisa and Med that the alarm and CCTV wires had been cut prior to the murder. Rose and Bill were taken out of the house and to the station for questioning.

Med asked permission to take Oliver’s clothes and explained to Rose that she wouldn’t be able to be with her son when he was being questioned. Lisa stepped in again and comforted Rose, causing Med to be frustrated again. Med spoke to Tony on the phone and as he explained his plan, Lisa contradicted him and Tony agreed with Lisa.

Lisa sat down with Rose to find out if Stephen had any enemies and Rose became upset as she couldn’t process what had happened. Med meanwhile, interviewed Bill who told him about Rose and Stephen’s other children including a daughter called Grace (Amy James-Kelly) who the family didn’t see anymore.

The press and public crowded outside the Marshbrooks’ home as Stephen’s body was wheeled out into an ambulance.

Tony arrived back at the station and caught up with Med. He asked about Lisa’s behaviour and when Med hesitated, Tony said he understood and told him to ‘leave it’ with him.

Lisa arrived home to find Abbie (Imogen King) and Rob (Art Parkinson) arguing over music. It was revealed that the family had moved into another home following Lisa’s demotion. She promised it was only temporary.

Back at the station Tony briefed the team about Stephen’s murder and told them about the Marshbrook family. Lisa was itching to share her insight but Tony ignored her and handed over to Med, who explained that Grace had got into some trouble and was distanced from the family. Tony told Med to continue working with the family and he issued jobs to the team. Lisa interrupted when she didn’t get given a task and Tony told her to go to Bill’s law firm and speak to the colleagues Stephen had worked with. James made a snide comment to Lisa telling her to make sure she didn’t ‘shag anyone’ this time.

Abbie was walking along the coast with her friends when she stopped by a café advertising for staff. She was being watched by someone outside.

Lisa headed straight to the law firm where she spoke to Lyn Chee (Wendy Kweh), who wasn’t in attendance at the party, and found out about the different members of the firm. Lyn explained that Bill’s son Mark wasn’t a partner but Stephen was a senior partner. She got upset as she insisted no one had a bad word to say about Stephen and they were interrupted by Mark. Lisa was asked to come back another day and a worried Mark asked Lynn to go home too.

As she got back into her car, Lisa received a call from her mother Penny (Lindsey Coulson), who told her she knew the man that had been murdered. They met at Penny’s work and Lisa asked questions about what she knew about the Marshbrooks. Before Lisa left, Penny offered to help with the kids but Lisa was adamant things were fine before asking her mother if she was OK, which she said she was.

Med accompanied Rose to a hotel she would be staying in while the investigation took place. He explained that there was a police officer outside the room to make sure she was safe. Rose became agitated about having left her son and Med assured her he would let her see her son as soon as was possible. Med then called Lisa and asked her for a favour, and we saw the same man watching Lisa that had been watching Abbie earlier.

Lisa arrived at the hotel to see Rose, who was still incredibly upset. She hugged her as she cried and let Rose get her emotions out.

Med’s next stop was to see Bill again, who like Rose was very upset. While they were talking Stephen and Rose’s son Jamie (Jack Archer) arrived with his partner Theo (Arian Nik) having travelled home.

Lisa managed to calm Rose down and Med returned to the hotel with Jamie and Josh. Rose also revealed that she knew where Grace was, and Med told Tony they’d located her. Lisa once again interrupted Med when they were talking to Tony, and they started bickering when Lisa thought Med wasn’t seeing the issues in the family.

DS Alexander Stewart (Simon Manyonda) informed the team of a stolen car that was seen in the area the day of the murder that they couldn’t track down.

Tony then took Med and Lisa into his office to reprimand them over their behaviour. Lisa was told she had to do what Med said but he also told Med that he needs to dig deeper as Lisa had suggested. Stepping out of one row, Lisa confronted James about the dig that he made and entered straight into another one. Med broke it up and took Lisa away.

The next stop was a car scrapyard where Med and Lisa met Frank Mercer (Owen McDonnell) and tracked down Grace. They asked if she’d heard about the murder of her father and she explained she had, but she wanted nothing to do with her family. When Med asked about her whereabouts during the murder, Grace became frustrated, and Frank showed Lisa signed forms that proved Grace was where she said she was.

Lisa told Med about the forms and Med suggested that Grace could still be involved. Lisa then apologised to Med and said she just wanted to do her job. As she got into her car Abbie called and told her she’d got a job to help out so she’d be late home.

At the scrapyard, Frank suggested Grace should go and see her father but she refused saying it was obvious her family didn’t want her around.

Med returned to Bill’s home and noticed a meals-on-wheels van outside. As he entered the house, Bill was arguing with Mark and Stella about the meal delivery. They told Med that Bill was getting forgetful and Bill overheard, getting upset once again. Bill then told Med to leave.

At the station Lisa watched as Oliver was questioned but he was still refusing to talk. Med returned and explained the scene he’d just watched unfold. Lisa suggested that they make the interview room homelier for Oliver by bringing some of his things from the house. Lisa went to do that and picked up an iPad on her way out where a crime scene photographer had found papers in the ashes of the BBQ.

Lisa reported her findings to Tony and they were interrupted by Tony’s wife Ellen (Kerrie Taylor) who had bags of belongings with her. Lisa observed as Tony and Ellen had a tense conversation. After Ellen left, Lisa asked if Tony was alright and he brushed whatever was happening to one side.

Oliver was joined by Rose in the interview room and Lisa arrived with a box of his things. She told Oliver to let her know if he needed anything else fetching. Oliver combed through the box and picked up the iPad. He thanked Lisa, marking the first time he’d spoken since being taken to the station.

As Rob left school, he was greeted by the mysterious man who had been watching the family.

Observing Oliver again through a monitor, Lisa noticed something and asked if she could have a minute with him. Returning to the interview room, she looked at Oliver’s iPad and saw he’d drawn a bird with two heads. When she asked him about it, Oliver said he’d seen it before on the inside of the man’s wrist who shot his father.

Tony told Med and Lisa they’d done good work and that they now had to try and match the tattoo.

Lisa picked Abbie up from work and when they reached the house, Lisa was less than thrilled to see her ex and the father of her kids Andy Warren (Joe Absolom).

Read our preview of ‘The Bay’ series 2 episode 2

‘The Bay’ continues Wednesday at 9pm on ITV. You can watch the full series right now on ITV Hub.