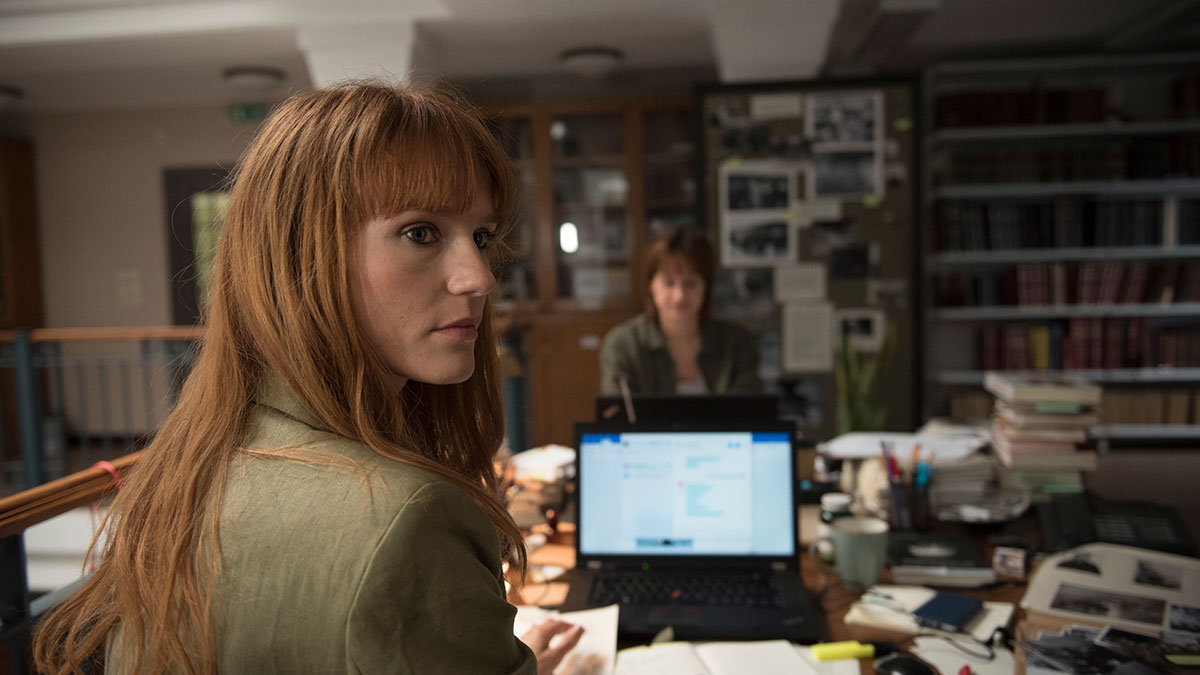 If you’ve ever worked in an office, the themes of this Danish thriller will ring true. We’ve probably all experienced those situations when someone joins the team or department, and they try just that bit too hard to become accepted. To be liked. Office politics are complex, with hierarchies and roles beyond mere job titles. There’s usually a joker, an organiser, a listener, an attention-seeker. We all know our roles, even if we’re not aware that we know them.

In ‘The Exception’, Anne-Lise (Sidse Babett Knudsen) is the new employee. She has her own office, which physically creates a barrier between her and her colleagues. Her three co-workers work side by side, desk by desk. They share funny YouTube videos, they socialise and laugh together. Anne-Lisa has a door between her and those precious moments of interaction. But when she opens the door, Malene (Amanda Collin) – one of the co-workers – complains that the draft affects her arthritis. So the door closes again. Anne-Lisa is desperate to be one of the gang. But is she’s trying too hard, or are the others guilty of bullying and being cliquey?

Soon, the pettiness escalates to something more sinister. Malene suspects that someone’s been tampering with her medication. And when threatening emails arrive, suspicion falls not on the war criminals they’re investigating – but on Anne-Lise. Could she really be responsible for such acts? And ultimately, murder?

This haunting Danish thriller is based on the novel of the same name by Christian Jungersen, a writer whose other film adaptation – ‘Du Forsvinder’ (You Disappear) – was one of the most popular Danish films of 2017. ‘The Exception’ was released in Denmark (under the name ‘Undtagelsen’) in July 2020 and remained on the list of best-selling Danish films for nine weeks. It also won the Valhalla Award for Best Nordic Film at the Santa Barbara International Film Festival last year. So there’s plenty of pedigree to this production.

It is set in offices of the Denmark Centre of Genocide Information (DCGI), where the four researchers are managed by Paul (Olaf Johannesen) – a kind, but feckless man who struggles to cope with the suspicions and jealousies of his female workforce. They’re investigating war crimes; a harrowing and disturbing subject matter that permeates throughout this thriller with real-life stills of actual atrocities interspersed within the drama.

It stars four female leads: Amanda Collin (‘Raised By Wolves’), Sidse Babett Knudsen (‘Borgen’ and ‘Roadkill’, the recent Hugh Laurie political thriller), Lene Maria Christensen (‘Terribly Happy’ and ‘The Legacy’) and Danica Curcic (‘The Mist’ and ‘Silent Heart’) – all of whom are excellent, particularly the always-watchable Knudsen as Anne-Lise.

I often find that films written from novels have a certain gravitas to them; the characters are well-rounded, and the plots fully fleshed out with red herrings, dead-ends and a variety of what-ifs? This is no exception – it’s a beautifully written and crafted thriller and keeps the viewer guessing until virtually the final scene.

What’s particularly engaging is the relationship between the four women; how they ebb and flow, with loyalties changing and alliances shifting. It’s a fabulous story, with a pleasing denouement at the end. Well worth watching – make no Exception!