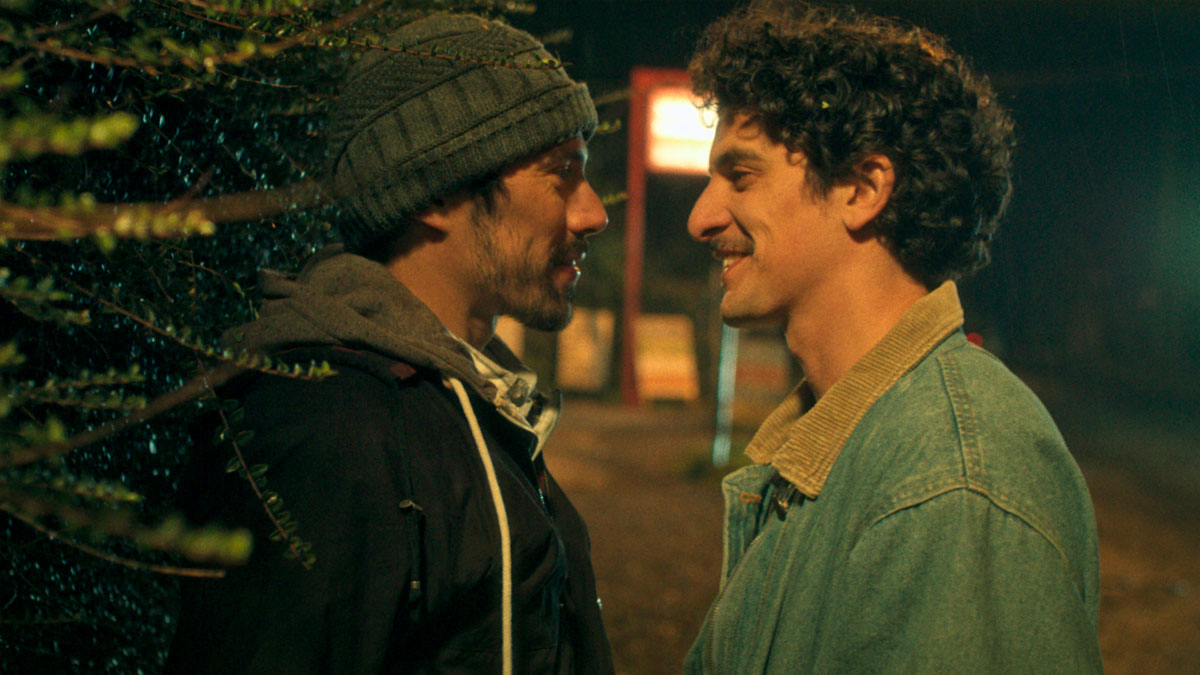 Lucas (Samuel González) travels to a remote town in southern Chile to visit his sister Catalina (Marcela Salinas) who is going through a rough patch in her marriage. Shortly after his arrival he meets Antonio (Antonio Altamirano), a handsome young fisherman, and the two hook-up. Keeping their relationship secret, Lucas and Antonio begin to spend all of their time together but their contrasting world views threaten to pull them apart.

‘The Strong Ones’ is the latest film from Omar Zúñiga Hidalgo and it explores an intense relationship that grows between two men from very different backgrounds. Lucas is an out gay man and a wide-eyed world traveller, looking for his next adventure and about to relocate to Canada after winning a scholarship. Antonio on the other hand is still closeted, having an occasional fling with a fellow closeted fisherman, and dedicated to his hometown.

What Hidalgo depicts so perfectly is the way these two men fall into bed so quickly only to discover that they may not be as compatible as they thought. Lucas and Antonio are consumed by the lust they have for each other, barely able to keep their hands to themselves in private or in public. The latter causes concern given the (suggested) homophobic society they find themselves in. Much of their interactions take place in Antonio’s home, away from the prying eyes of the community.

As time passes and Lucas’ departure nears, the two men begin to clash over their differing world views. Antonio feels that Lucas looks down on him because he has no desire to have more in his life than his simple way of living. He also believes that Lucas has come from privilege, making his path in life a lot easier than the one Antonio has had to follow. Unbeknownst to Lucas, Antonio is also dealing with the jealousy of his co-worker, who he drops like a sack of hot potatoes the minute Lucas walks into his life. That conflict causes Antonio to fear losing his job and being shunned by the community.

One of the strengths of ‘The Strong Ones’ is the chemistry between Samuel González and Antonio Altamirano. From the moment their characters lock eyes, there’s sexual tension all over and at times you feel like you’re being a voyeur on their intimate and intense relationship. Their connection is evident immediately but it’s the work the actors do when the incompatibility of their characters starts to surface that’s fascinating to watch. Their arguments are as believable as their love-making, and both actors are a joy to watch.

‘The Strong Ones’ is a superb film from Omar Zúñiga Hidalgo. It’s an interesting insight into what being gay is like in a small Chilean town, and it explores the dynamics between two very different men well. Hidalgo has the ability to draw you in during the intimate scenes and force you to choose sides when life gets in the way of Lucas and Antonio. The film also eschews the ‘happy ending’ convention, giving ‘The Strong Ones’ a real dose of reality.