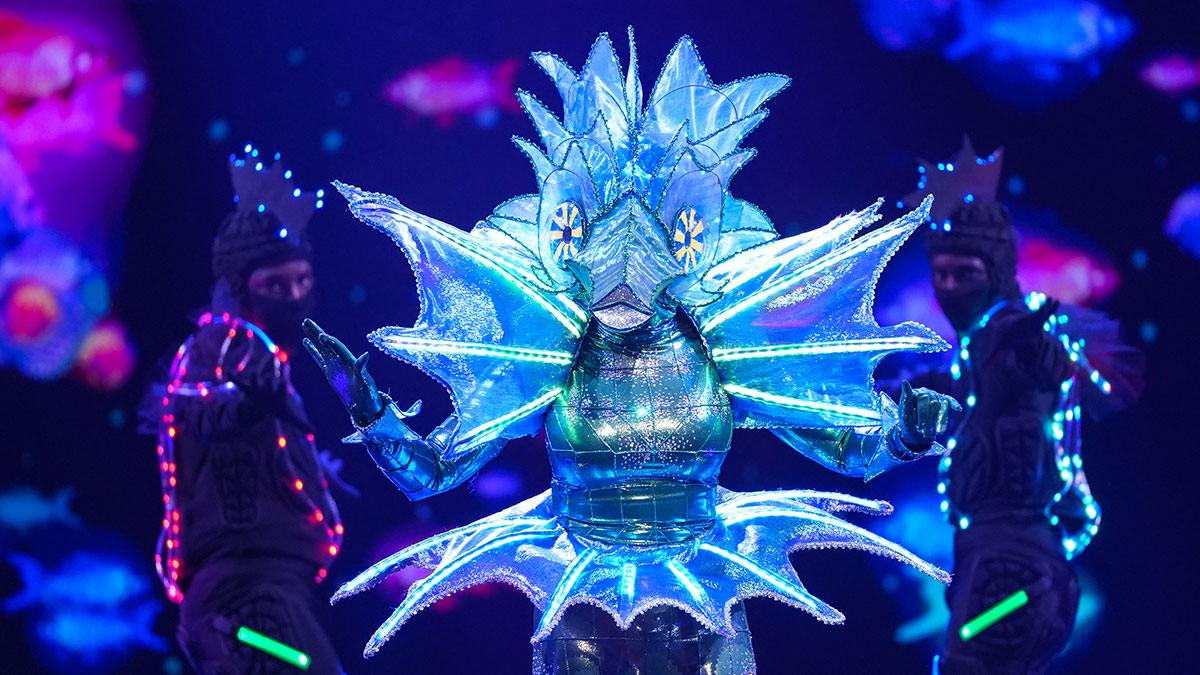 ‘The Masked Singer UK’ continued this weekend as viewers met the second set of costumed singers.

Last weekend saw Alien unmasked and it was singer Sophie Ellis-Bextor under the elaborate costume. The panel – Mo Gilligan, Davina McCall, Rita Ora and Jonathan Ross – were on hand to throw out wild guesses (some were much more realistic than others) and Joel Dommett kept the show on track.

I’ve rounded up all of the clues thrown out during the latest episode and shared our thoughts on who the masked singers could be. Read my guesses for episode 1. Keep reading to find out our thoughts…

The clues: Harlequin said she wasn’t a fool but she liked to joke. She said she’d have to be pushed on stage and likened being on the show to doing karaoke, which she said was new for her. Harlequin once played a male lead in a musical.

Our guess: Gabrielle. I didn’t get a whole lot from the clue package but as soon as she started singing, it was obvious that it’s the ‘Dreams’ singer under the mask.

The clues: Blob was seen in a school and said it’s not the first time he’s been called four eyes. He said he was loud and bright, and that he wanted to be James Bond or Batman as a kid. Blob ended his clue package saying he wanted to make a good first impression. After his performance he said he recorded a demo for Simon Cowell.

Our guess: Lenny Henry. I’m not sure about the Simon Cowell clue but Lenny did play a head teacher in ‘Hope and Glory’ on the BBC. He also wears glasses and the voice did sound a little bit like him.

The clues: Viking said he was curious and an explorer that forged his own way. He said he discovered answers and was looking for a voice. Viking also kept emphasising the ‘king’ part of his name. After his performance he said he wears another kind of armour.

Our guess: James Blunt. I’m not 100% convinced on this one but the clues do seem to line up given that Blunt is known as the ‘King of Twitter’ and he was in the army. He also famously has a high-pitched voice.

The clues: Bush Baby sounded Australian and said he was full of mischief. He also did some magic tricks and pulled what looked like a potato out of a hat. Bush Baby wore a fez and was seen pulling some boxing moves too. After his performance he said a lot of his wardrobe has been seen on screen.

Our guess: I’m not sure on this one yet. It seems like it was someone who has been on ‘I’m a Celeb’ but I don’t think that the Australian accent was genuine.

The clues: Grandfather said you don’t think about time until it’s running out. He referenced extra time, which suggests he could be a footballer. Grandfather said he’s looked after an estate and hinted he may be a goalkeeper. Three lions were shown during the clue package and we saw cowboy boots and football boots. After his performance he said he’s never been academic but has been called a genius.

Our guess: David Seaman. This is definitely a starter guess but the goalie clue along with the football hints work with this guess. He’s also older but the voice sounded younger than I expected. I may have to rethink this one.

Sea Horse was unmasked at the end of the episode as Spice Girl Melanie B, who Mo guessed correctly after her performance.