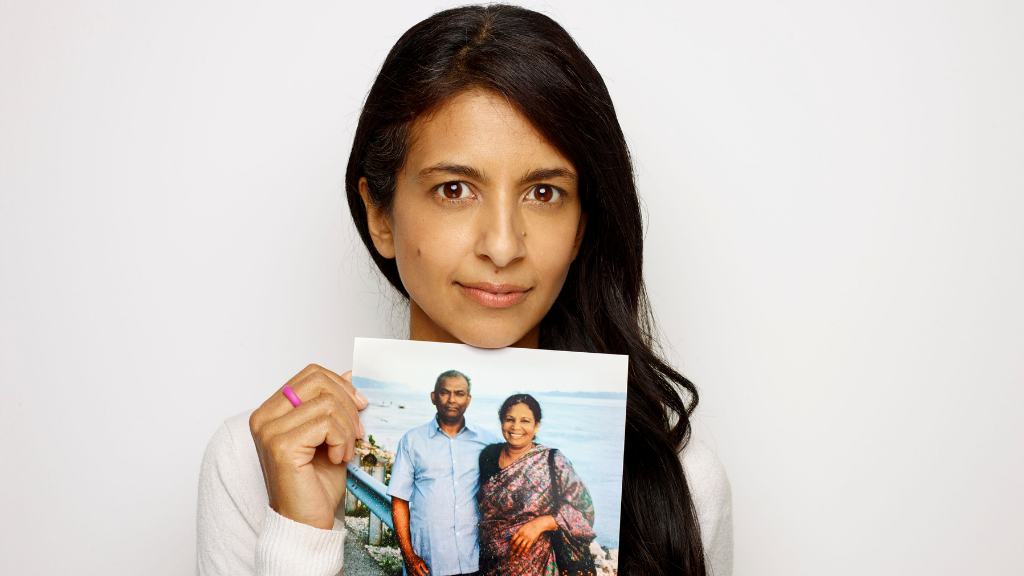 Konnie Huq joins Ashley Walters, Doreen and Stuart Lawrence, Jeff Brazier, Gloria Hunniford and others as subjects of Royal London and Rankin’s collaborative exhibition on death that hopes to change the narrative on how we talk about loss.

Konnie, who lost both of her parents within two years of each other, is seen holding a happy image of her mother and father pictured together. Another photo captures her in front of a projection of the same image to create a moment that speaks to the past and of her loss.

“Both of my parents died within two years of each other when I had very young children. It was a weird time, watching them grow, learn to walk and my parents doing the opposite – the circle of life.”

“Often people compartmentalise death and store it away, only for it to hit you when you least expect it.  It’s such a personal thing that people are quite awkward around it and when it comes to other people, some are in touch to see how you are and others give you a wide berth – maybe because that’s what they wanted when they experienced loss themselves.”

Konnie was inspired to take part in the Royal London exhibition following her contribution to Dear NHS: 100 Stories to Say Thank You, that touched on the loss of her parents, and sees the value in proactive conversations around death as a topic that affects everyone.

The exhibition also includes an interview series and short film discussing the importance of talking about death and planning for the inevitable.

“It is an important thing to have conversations in the immediate aftermath of loss but when the moment has passed, you feel you can’t bring it up or you’re harping on about the past, but it’s something that most people will encounter – so it seemed like good timing to contribute to Lost For Words, to pick-up that conversation again.”

“If  you’re having a conversation you can own it more and have more control, but, if you are compartmentalising, you may sweep it under the carpet – and mentally it’s going to be manifested in some way, so having outlets for that dialogue is the best way to release build up.”

The subject matter brought up the importance of expressing the impact of the emotions of everyday life for mental wellbeing, health and a route to happiness.

“Talking about how you are, not just around bereavement, but everything [in life] that emotionally impacts you.”

“Women are generally good at vocalising due to having more opportunities to express this than men and the fact that everyone has different personality traits means some of us are more used to bottling up and it can manifest in a different way.”

“People can see it as a weakness, you fear you will be judged. All people should aspire to is happiness for all and to surround you with people you support you in this but we don’t always realise the path to this, it can be as simple as having a conversation that lifts the weight off your mind. It can be little things that chip away at something before the boiling point is reached. Small releases are much better than getting to that stage. Dealing with it in little steps helps – it doesn’t need to be a mountain, it can be stairs essentially.”

“We deal with things in society that are regimented, outsourcing and compartmentalising and we get so used to it that we don’t address our emotions.”

Konnie has experienced a shift in perspective on life after her mum’s early onset dementia was triggered by stress.

“I didn’t do the test for early onset dementia, which is hereditary, because even if you have the gene, stress is the trigger, so even knowing I have the gene could be stressful but in general but at every level, as a society we place far too much stress on all day to day decisions.”

“Buying clothes or going to work, we make all these things unnecessarily stressful, from the combined pressure of society, social media, saying the right things. I believe there  is a correlation between longevity, living a stress free happy life, mental happiness and taking care of your health.”

“I chose to make more things like water off a duck’s back by not stressing about things that aren’t even important – happiness and health are longevity.”

“Where my parents come from in Bangladesh that isn’t a developed country like the UK, death is a much more common thing and it’s dealt with very differently.”

“Overindulging in loss can be a bad thing too. My parents come from a place where you have to get on with it. I had to get on with it, having two young children who were growing and trying new things. It helps me to realise how privileged we are in a way to have adversity as a society.”

Konnie describes her dad as a ‘real joker’, quite blunt’ and her mum as having a ‘cheeky’ sense of humour. She found humour in the culturally different elements like the directness from her father in pointing things out that some people may find rude.

Finding humour in adversity has been fundamental to Konnie’s ability to keep moving forwards in life, particularly after loss.

“I can always find humour in situations, it’s sort of bound up in people’s stress levels. I find so much in life absurd, some things are so bonkers they make no sense – modern living is full of it, we’re so conditioned that we don’t even really question the stupidity of it all.”

“Any situation that feels like adversity such as covid, it’s a big change, new norms come about and there is humour in the switchover, whether its looking at people walking down the street and navigating each other while trying to remain socially distanced, there is comedy to be found around us if we look for it.”

Questioning the status quo and perceived societal norms are at the centre of her children’s book Fearless Fairy Tales – a series of quirky, funny and open-minded stories reimagined for the 21st century allowing parents to discuss topics like welcoming refugees, #MeToo and the gender pay gap.

On the circle of life, our interview ends at the beginning: “Kids are  born and are literally a blank canvas and everything that they become are things that we as a society paints upon them. If we can get kids to realise that there are damsels in shining armour and knights in distress, we can do a lot to encourage talking about things, teaching them that they can be anything they want can flip reverse the stereotypes.”

Royal London, the financial services mutual, launches its free digital exhibition in collaboration with Rankin, Lost for Words, on 16th November 2020 at lostforwords.royallondon.com.