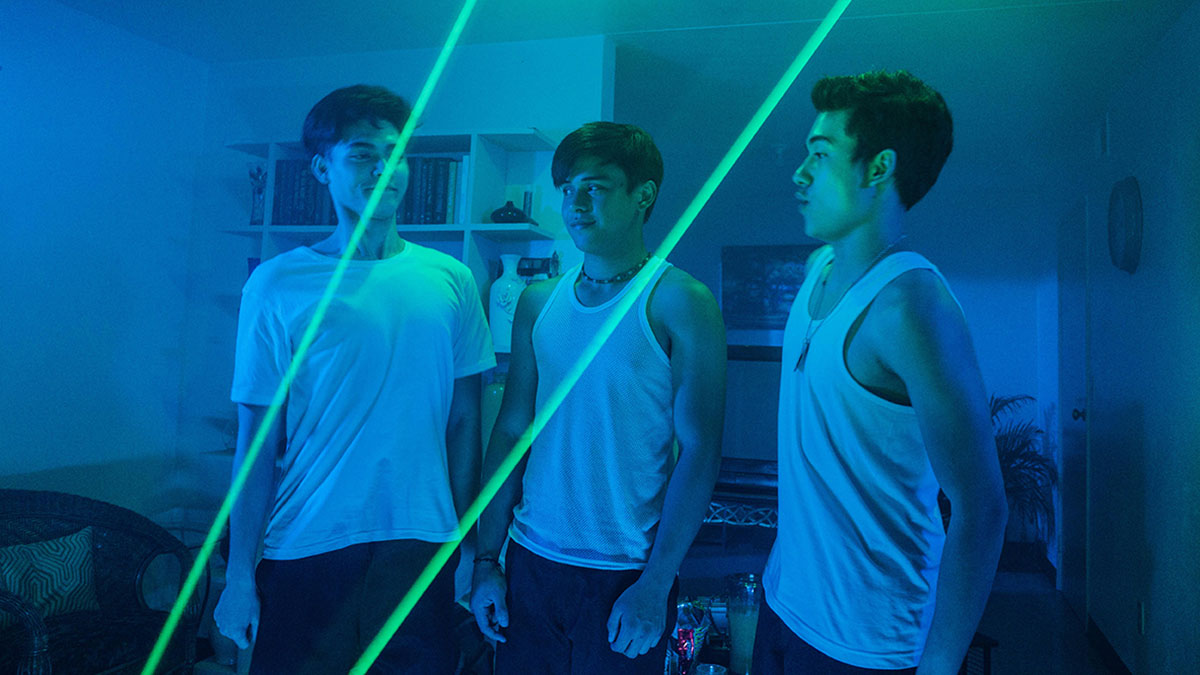 Loner Felix (Khalil Ramos) is delighted when new students, and brothers, Magnus (Ethan Salvador) and Maxim (Jameson Blake) join his school and take an interest in hanging out with him and paying him to help improve their grades. The brothers lead the otherwise straight-laced Felix astray, introducing him to alcohol and cigarettes, and the trio bonds quickly. As Felix continues to be influenced by the brothers, he struggles to hide his attraction to Magnus and becomes worried about the escalating behaviour of Maxim.

‘2 Cool 2 Be 4gotten’ is the directorial debut of Filipino director Petersen Vargas. The film was originally released only in the Philippines in 2016 but thanks to NQV Media, it’s getting a wider release now. A dark drama that tackles coming-of-age tropes, ‘2 Cool 2 Be 4gotten’ does stray from the beaten path in a bid to do something different within the genre. Felix is an overachiever who makes up for his impoverished background by excelling in class. That of course makes him an easy target for his classmates, and until Magnus and Maxim arrive Felix has no friends.

The film rests on the dynamic between the three central characters. Magnus is the more sensitive and grounded of the brothers, and it’s difficult to tell at times if he’s leading Felix on or possibly struggling with his own sexuality. We never really get an answer to that question but some of the scenes that take place, suggest that Felix’s feelings may not be wholly one-sided. Maxim on the other hand is a wild card, concocting a devilish plan to achieve his desire to move to America. He’s not afraid to use Felix to get what he wants or screw over his own family if it helps him reach his goal.

In the middle of it is Felix who remains wide-eyed and naïve for most of the film, until he starts to get a handle on Maxim and attempts to turn the tables. The scene where that happens is one of the most surprising moments in the film, which serves to highlight the level of frustration Felix feels due to the expectations on him and his sexuality. The sense of foreboding that establishes itself early on leads to a tragic climax, and director Vargas has fun playing with the audience until he gets to that point.

While the story is strong, the same can’t be said about the acting. The three leads are adequate at best but their performances are largely stilted and a little wooden. None of the actors has the ability to run the range of emotions they need, although Ethan Salvador comes closest as Magnus. The supporting cast is small but Magnus and Maxim’s mother Demetria (Ana Capri) is a scene stealer, a prostitute who boasts to her children about how much more than them she can drink.

‘2 Cool 2 Be 4gotten’ is a nice twist on the coming-of-age genre and it’s interesting to see the queer experience explored by a Filipino film-maker, as that’s not something we see too often. The story is strong and the film is entertaining, but the acting could have elevated it just that little bit more. For a debut feature, it’s a solid enough achievement and it’s enough to keep eyes on what Vargas has coming up next.