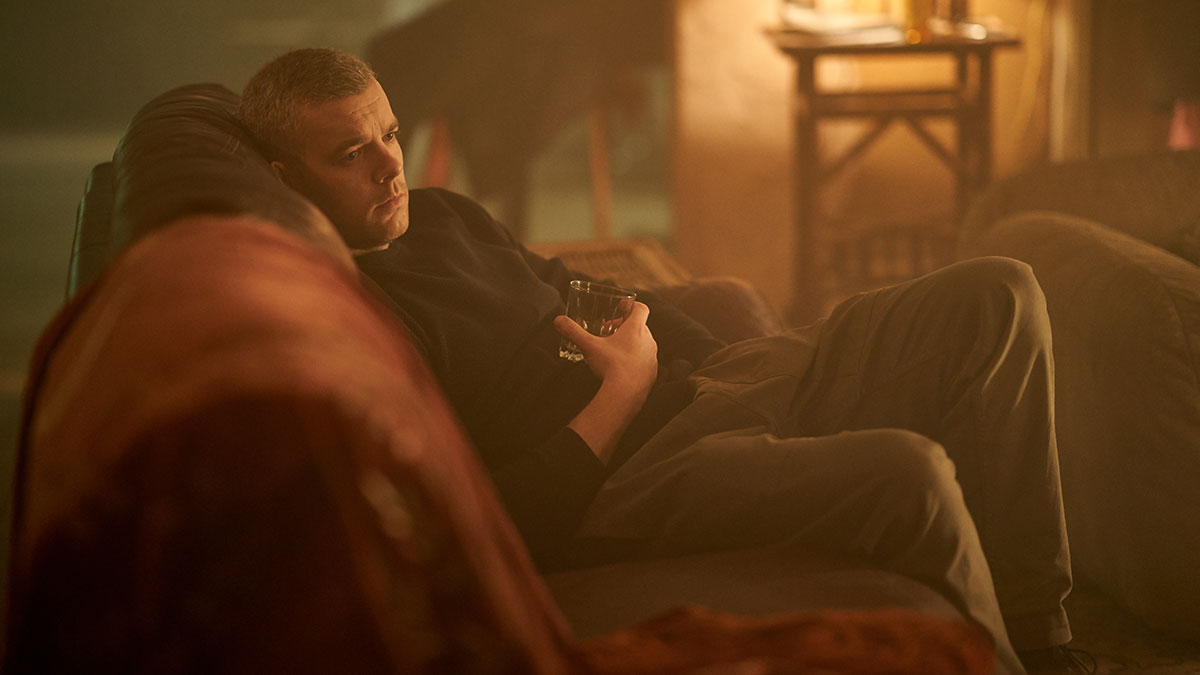 Things came to a head between Nathan (Russell Tovey) and Bob (Bertie Carvel) in the final episode of ‘The Sister’.

The episode opened with a flashback of Nathan injecting Holly (Amrita Acharia) with hormones as they tried for a baby. The action then returned to Bob’s house where he admitted he’d given Elise (Simone Ashley) drugs laced with cyanide. Nathan grew upset as the full horror dawned on him of what had happened.

Bob told Nathan that he had been haunted by Elise ever since and he said they needed to put it right by admitting what they did. Nathan refused to tell the truth and Bob goaded him about how he’d taken advantage of Holly’s grief to worm his way into her life. Bob said that Nathan had to let Elise and Holly go otherwise he’d never be free from what happened. As Nathan continued to refuse to play along, Bob informed him that he’d give him one day to do the right thing.

Nathan drove to the police station to see Jacki and started to tell her what had actually happened. He told her that he had lied during his original interview because he didn’t want to get in trouble because of the drugs. Jacki revealed that she knew that Bob had resurfaced in Nathan’s life. Nathan lied about why Bob had returned and he made out that Bob might do something to hurt Holly. Jacki told him he was setting things in motion that can’t be stopped.

Nathan asked Jacki who had seen Elise after he and Bob had been spotted on their way home. Jacki said Elise’s ex-boyfriend claimed to have seen Elise banging on his window and crying but when he’d gone to find her, she’d disappeared. Nathan manipulated the situation by seeding the idea that Bob could have returned to harm Elise.

Returning home, Nathan found Holly angry and upset, demanding to know where he’d been. Nathan said he couldn’t tell her and it looked, minutes later, like Nathan was considering ending his life (or maybe Bob’s) with an overdose.

That night Nathan returned to Bob’s house and offered him a whisky. As Nathan prepared the drinks, Bob asked how his day had been. Lying, Nathan said he had considered telling Holly but that he hadn’t been able to go through with it. He then brought up Jacki and intimated that she knew what had happened and they were living on borrowed time. Nathan asked for more time to spend with Holly before they turned themselves in to Jacki but Bob refused saying he needed things to end. Nathan offered Bob another drink and then they agreed to go to Jacki.

Nathan asked Bob if he’d meant to kill him too the night Elise died as they both almost took the drugs. Bob finished his drink and as he stood up, he started to feel odd and collapsed. Nathan put on a pair of rubber gloves and told Bob he was going to kill him. Pinning him to the floor, Nathan stuffed sleeping pills in Bob’s mouth and then demanded the key for the safe.

Nathan searched for the key leaving Bob unattended, who managed to get his phone out of his pocket and call 999. Nathan took the phone out of Bob’s hand and told the operator he needed an ambulance, then he called Jacki and told her Bob had taken an overdose. Before Jacki arrived, Nathan found Bob’s keys in the door and opened the safe. He took out a box but Elise’s dress wasn’t in there, it was in the fridge.

As Nathan tried to remove the dress from the freezer, where it had frozen to the bottom, Bob regained consciousness. Nathan stopped what he was going and smothered Bob as the police broken down the door to the house. He got the dress out of the freezer, locked the safe, then put everything back so it looked like he was trying to help Bob when the paramedics arrived. Realising he’d left a rubber glove on, Nathan took it off and after giving his details to the police, Jacki told him to go home.

Before he left, he pointed Jacki in the direction of the safe and lied that Bob had been banging on about it. Jacki opened the safe and she found Elise’s skull in a box. Jacki called Holly to tell her what she’d found. Nathan meanwhile was in his car with the dress in the bag, crying while Holly took her wedding photo off the wall and smashed it on the floor.

Nathan returned home to find Holly upset and sitting in the hallway. Holly confronted him about being there the night of Elise’s disappearance and asked if he knew it was Bob. Nathan said he didn’t, lying he’d put the pieces together when Bob had resurfaced. Nathan continued to lie to Holly and she grabbed his face saying he should have told her. She then revealed she was leaving him and moving home.

The next morning Nathan received a visit from Jacki who told him that he would need to answer some questions. She warned him that he would need to think about how the events of the night before unfolded and mentioned that Bob’s phone was used for the 999 call. Jacki then asked how Nathan was sleeping and she made it clear that she knew he’d been prescribed sleeping pills, the same pills that Bob had taken.

Jacki asked where Nathan’s pills were and he lied saying he’d flushed them away. She advised him to ‘source’ some sleeping pills to cover his tracks and told Nathan that Bob had a history of drug abuse and suicide attempts. Then the revelation came that Bob wasn’t dead but he was in a coma that he was unlikely to wake up from. Jacki told him to give Holly a few days to come around and then made it clear she believed Nathan had tried to kill Bob for her.

Nathan visited Bob at the hospital and was startled when he opened his eyes. A nurse explained that it was typical of a coma patient and Nathan left. Nathan then met Holly and asked how she’d been. They exchanged small talk before Holly asked why Nathan had never told her the truth. He said he knew it would be the end of them before the couple shared a sweet moment. Holly then revealed she was pregnant causing Nathan to break down and the two embraced.

Time moved on to when Holly had given birth and Nathan visited her in hospital. It was established that Nathan and Holly had reunited. As Nathan drove home, the camera panned to the car’s back seat where Elise was lying.

‘The Sister’ is available to watch on the ITV Hub now.