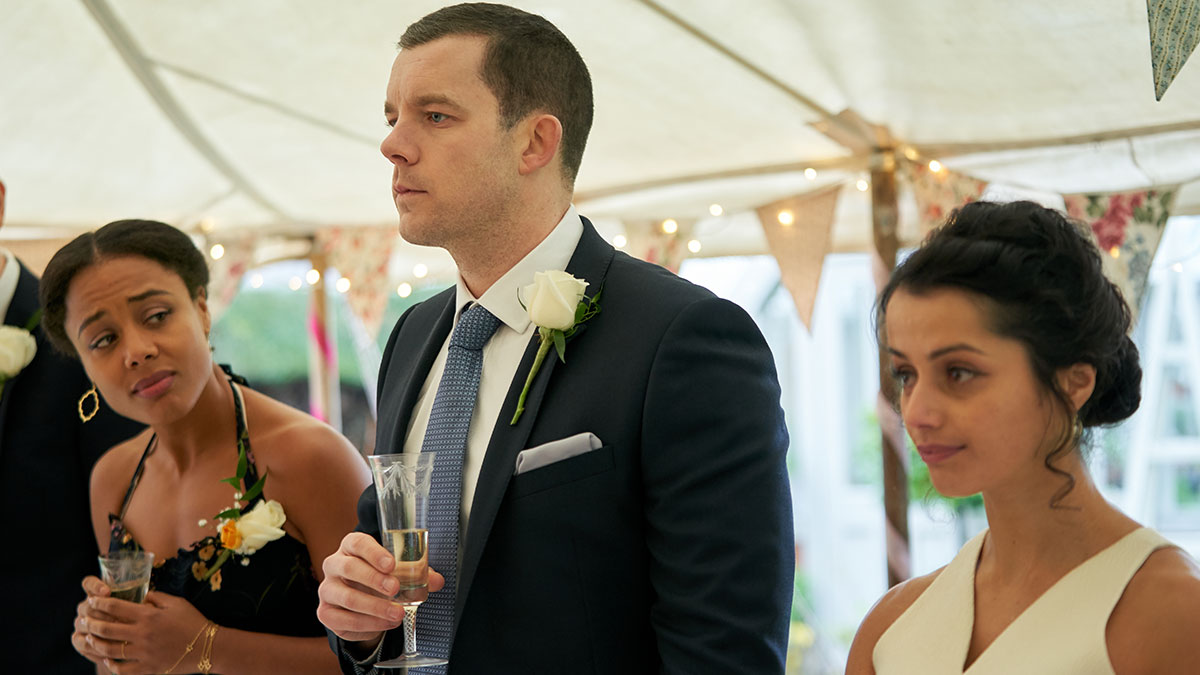 Nathan (Russell Tovey) was almost caught by Jacki (Nina Toussaint-White) on the penultimate episode of ‘The Sister’.

We got to see Nathan and Holly’s (Amrita Acharia) wedding in the latest episode. At the sit-down reception, Holly made a speech about Elise pointing out how she believed that her sister’s spirit was present. As Holly made a toast to Elise, Nathan looked incredibly guilty and after he took himself off to cry.

Back in the present day, Holly was working on her laptop when she heard a strange noise in the house. She slowly walked into the hallway and followed the direction of the sound. Nathan and Bob meanwhile arrived at Bob’s lock-up and argued about what to do with Elise’s remains. Nathan suggested burning them and then suggested dissolving them with acid. Bob wanted to leave her in the freezer, which Nathan took issue with.

Holly called Nathan who eventually answered, and told him she thought there was someone in the house moving around. She asked how his evening had been and he told her he’d explain when he got home later. When he hung up, Nathan asked Bob what he should tell Holly about where he’d been and started to freak out. He screamed at Bob telling him he never hurt Elise and Bob refocused the conversation to what Nathan was going to tell Holly.

Nathan returned home and found Holly sat on the sofa drinking wine. She handed him a glass of wine, which he gulped down, and Holly asked Nathan about his ‘weird night’. Nathan dismissed it as ‘nothing’ but Holly kept pressing him about what Bob wanted forcing Nathan to lie by saying Bob had asked for £10,000. Holly suggested that Nathan direct Bob to Citizen’s Advice and asked if Bob was going to keep asking for money. Nathan assured her that it was over now and they wouldn’t see Bob again, then dismissed himself and went to bed.

Jacki continued watching the recordings of her original interviews with Bob, replaying the same moment over and over as she hunted for clues.

In bed, Nathan started to hear things and memories of the night of Elise’s disappearance haunted him. We returned to Elise and Nathan in the back of Bob’s car snorting drugs and wishing each other a Happy New Year. Elise asked Nathan to kiss her and the two started getting hot and heavy. Elise began acting strangely and as Nathan grappled with her, she hit her head on the window and passed out. Bob returned to find Nathan in the car with a lifeless Elise, and he dragged her body out of the car to try and resuscitate her.

Nathan took over and Bob told him that Elise was dead. Nathan ran out of the woods, gasping for air. He returned and Bob asked if Nathan had hit Elise, which Nathan denied. Bob asked if anyone had seen Elise and Nathan together before he picked them up. Panicking, Nathan said he didn’t think anyone had seen them and he was alarmed when Bob suggested they had to bury her. Elise’s phone started to ring and Bob put it in her pocket before covering her up. Nathan and Bob then dug a hole and buried her in the middle of the woods. After Bob told Nathan they could never see each other again.

Back in the present day, Nathan played back the events of the night before and he called Bob suggesting that they meet. He insisted that Bob tell him what the plan is for Elise’s remains, telling him that he doesn’t trust him and that he wanted to protect Holly. Bob invited him to his house but Nathan refused and they agreed to meet in the pub that evening.

Instead though, Nathan went to Bob’s lock-up and broke into the freezer to find it was empty. He had a flashback to seeing a safe at Bob’s house so he called Bob and lied about running late. As Nathan drove over to Bob’s house, Jacki continued investigating Bob and she found his home address. Could Nathan and Jacki be about to bump into each other at Bob’s house?

Nathan arrived first and forced a window open so he could get inside. He turned on a video projector and discovered that Bob had been recording diaries of his meetings with Nathan. Distracted by a car pulling up outside, Nathan panicked when he saw Jacki approaching the house. She rang the doorbell and Nathan quickly turned off the projector and hid. Jacki walked to the front windows and shined a torch through to look inside. She noticed the safe and thought she saw someone’s feet. As Nathan heard Jacki get back into her car, he peeked through the window.

Trying to get out of the house, Nathan realised he was stuck. Bob called him from the pub to find out where he was and Nathan assured him he’d be there soon but Bob changed the plan and told Nathan to meet him at his home. As he tried to open the window to get out of the house, he attracted Jacki’s attention. To get her to leave Bob’s house, he called Jacki and asked her to meet him using Holly as an excuse. He then said he needed to talk to her about Elise, admitting he’d lied to the police about what happened on the night of her disappearance.

Jacki told Nathan to meet her at her office in 10 minutes but she still didn’t leave. Instead she got out of her car when she saw Bob returning home and spoke to him. Jacki asked Bob if he could spare time to chat with her but he said he couldn’t as he had company. Refusing to let him go, Jacki asked why Bob had changed his car and pointed out that she knew he hadn’t sold his previous car, at least legally. Before she left, Jacki told Bob she’d call him.

Nathan grew impatient for Jacki to leave and was still inside the house when Bob entered the front door. Bob caught him trying to clamber out of the window and offered him a drink. Nathan closed the window and accepted a glass of water. Bob asked if Nathan had been to lock up and Nathan revealed he had and said he was worried about what was happening. Bob reiterated that Elise was with them and watching, and told him he knew how to stop Elise haunting them.

Bob started to babble on about Elise was supposed to prove there was life after death. Nathan pressed him to explain what he meant and Bob revealed that he purposely killed Elise to try and prove the existence of ghosts.

‘The Sister’ concludes on ITV at 9pm tomorrow night.