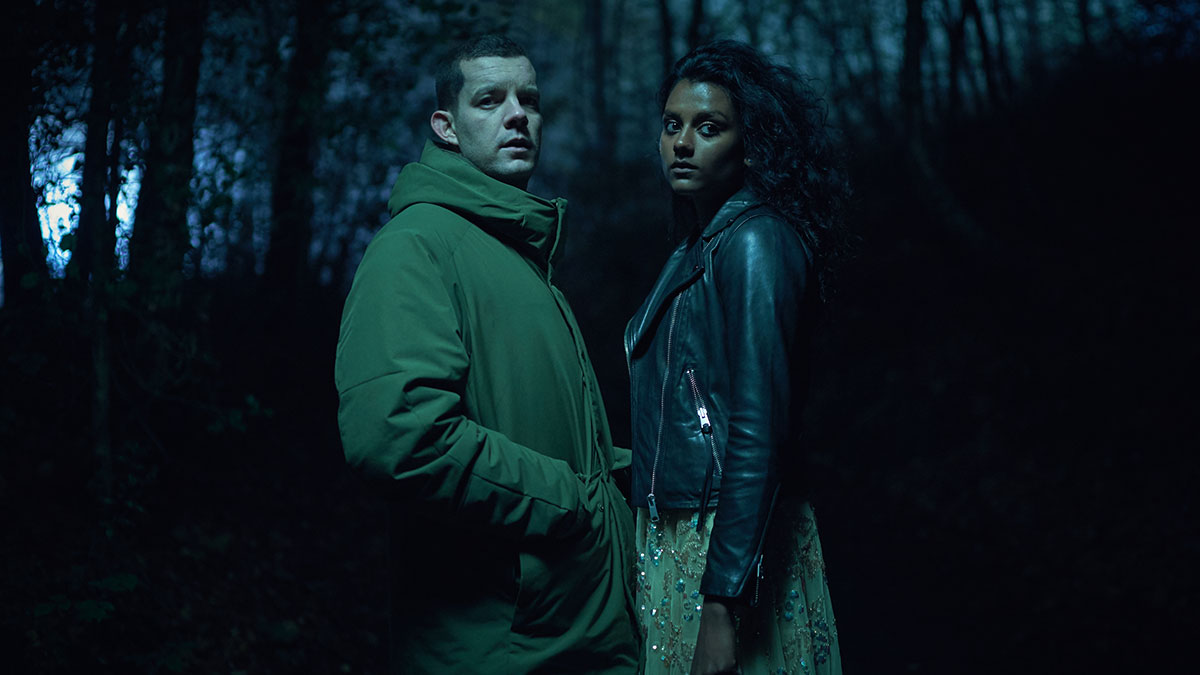 Bob (Bertie Carvel) proved not to be Nathan’s (Russell Tovey) only threat on the second episode of ‘The Sister’.

Picking up from where last night’s episode ended, Nathan was still stood alone at home wondering where Holly (Amrita Acharia) was. A flashback to 2013 saw Holly putting up pictures of Elise (Simone Ashley) on the wall and she asked Nathan if he was bothered by them. He said he wasn’t and Holly told him she’d likened him to a puppy that needed rescuing to her mother.

In the present day Nathan started to panic as time ticked on and there was no sign of Holly. She burst into the house and told Nathan that she’d lost her phone, which is why she hadn’t replied to any of his messages. Nathan prompted Holly to talk about the fact she’d had her period and they dealt with the fact that they weren’t going to be having a baby. Holly became upset and they discussed stopping trying for a baby. Nathan tried to be supportive and told Holly he just wanted her to be happy.

Jumping back to 2009, we saw more of the New Year’s Eve party where Elise caught Nathan’s eye. Bob approached Nathan at the bar and the two had a chat about not liking parties. Bob told Nathan that doing drugs would help them settle into the party. As they indulged, Nathan quizzed Bob over whether he truly believed in ghosts and Bob showed off his knowledge of the paranormal. Bob then revealed he’d seen a ghost and Nathan suggested they return to the party.

Nathan wandered around the house and he saw Bob chatting to a group of people. As the guests rang in the New Year (2010), Nathan spotted Elise looking cosy with someone. He went out into the woods to make a call and Elise approached him, wishing him a Happy New Year.

Later in 2010 police officer Jacki (Nina Toussaint-White) told her boss that she knew Elise’s sister before entering an interview room where Nathan was waiting to be questioned. Nathan was asked if he spoke to Elise and he said he wasn’t sure. A flashback proved that not to be true as Elise and Nathan chatted in the woods. A car approached them and Bob was inside it. He wished them a Happy New Year and when Nathan said they were going home, Bob invited them for more drinks.

As Nathan was questioned further, he told the police about Bob but still denied having seen or met Elise. His questioning was intercut with more of the flashback as Bob took Elise and Nathan to a supposedly haunted house. Bob teased Elise with drugs and when he noticed she was cosying up with Nathan, he gave her the drugs and went for a wee. Elise and Nathan did drugs in the back of the car.

Jacki asked Nathan if he sold drugs to Elise and he started to panic. Then she pulled out pictures of Nathan and Bob driving in the early hours and told him that Elise was reported to be alive after the pictures were taken so they weren’t looking at him as a suspect.

We then saw Nathan arriving at Holly’s house with flowers and he met her father Graham (Paul Bazely). Holly wasn’t home but Graham invited him in and introduced him to his wife. They explained that Holly was just out but would be back soon. It was established the flashback we were seeing took place after Nathan’s date with Holly, and when she arrived home she wasn’t best pleased to see him. Holly took Nathan to task about turning up at her house and she told him that things weren’t normal for her family. As she calmed down, Holly invited Nathan to Sunday lunch.

The next flashback jumped to Nathan arriving at a pub to meet Holly’s friends to celebrate their engagement. Jacki, the maid of honour, arrived and the two looked shocked to see one another. After she sat down she asked Nathan to join her for a cigarette. He tried to refuse but she insisted pretending that she wanted to warn him about treating Holly well. Outside Jacki insisted she was going to tell Holly that Nathan was there the night that Elise disappeared. Nathan lied about why he hadn’t told Holly, claiming he didn’t know she was Elise’s sister until they were too far into their relationship. Jackie threatened to bury Nathan if he hurt Holly.

Returning to the present day, Nathan was woken up by his phone ringing. It flashed up Holly on the screen and it was revealed that Bob had stolen Holly’s phone. He insisted once again that they had to move Elise’s body the next day. Bob was shown to be outside Elise’s parents’ house and he was revving the engine to get Graham’s attention. He threatened to tell Graham that Nathan buried Elise unless he agreed to move the body the next day. Nathan caved in just as Graham reached the car so Bob reversed and left.

The next day, Bob picked up a very angry Nathan who threatened to kill him if he messed with his family. Once they arrived at the place where Elise’s body was buried, Bob revealed that he used to visit the site. Nathan looked appalled and claimed he’d never been back there.

At home, Holly made excuses for Nathan as her parents arrived for the evening and she told them Jacki would be joining them.

In the woods, Bob and Nathan picked up spades from the boot of the car and wandered deeper into the woods. Nathan asked Bob if he’d really seen Elise as a ghost at the end of his bed but Bob ignored him and started digging.

After Holly’s parents left, Jacki asked Holly if she was OK, noting that she’s been checking her phone constantly. Holly confided that Nathan was having nightmares and crying in his sleep. She told Jacki that Nathan has been prescribed sleeping pills to try and help his night terrors. The conversation moved on to Bob and Holly said she was concerned about his sudden arrival and what it was doing to Nathan.

Nathan and Bob uncovered Elise’s remains while Jacki thought over to her interactions with Nathan, suspecting that something was amiss. Jacki went to the police station and searched through Elise’s file. She found the video of Nathan’s interview where he mentioned being picked up by Bob. Jacki then pulled up Bob’s interview and the penny seemed to drop.

‘The Sister’ continues tomorrow night at 9pm on ITV.