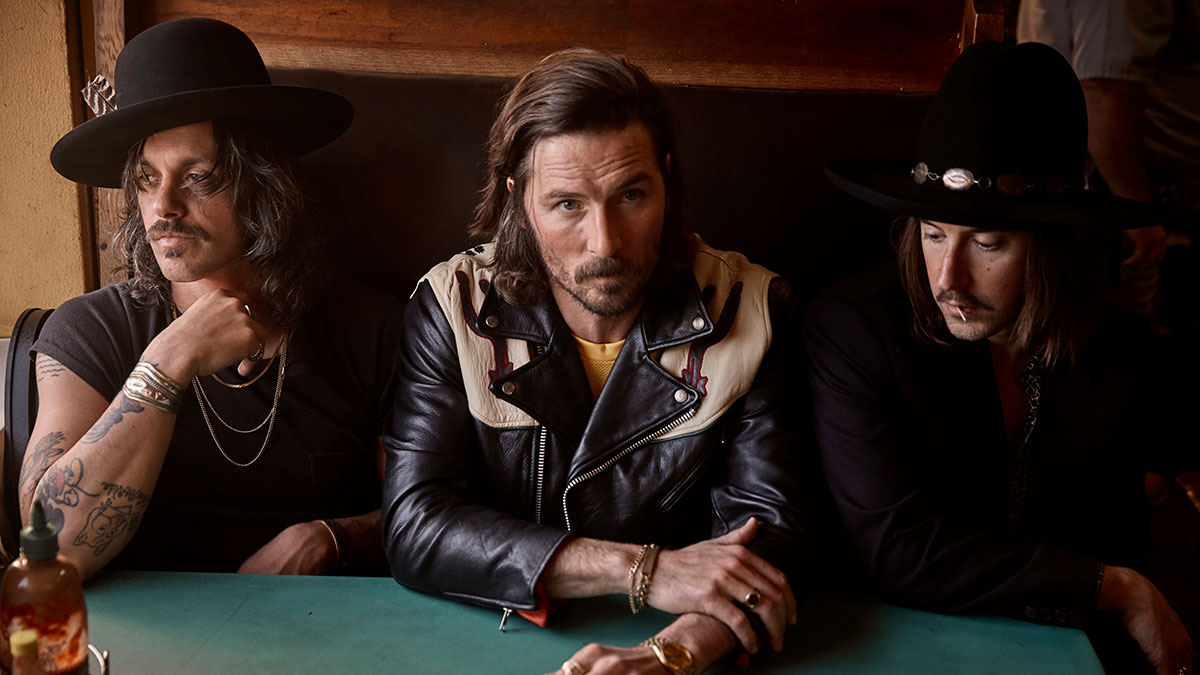 Midland has just announced their rescheduled European tour dates for 2021, giving us Country fans something to look forward to.

The band was supposed to be performing this December but due to the pandemic, that’s no longer possible. Since Midland were last on our shores in 2018, they’ve released second album ‘Let It Roll‘ and band member Mark Wystrach has gotten married and become a father.

I hopped onto Zoom with Mark recently to talk about the band’s rescheduled tour, find out how he’s been coping during the pandemic and to discuss the new music they’ve been working on…

Life has changed so much since we last saw each other. You guys were exhausted after being on the road for years, you released “Let It Roll, you got married, you’re a father now and we’ve got the pandemic to contend with. How are you doing?

It’s been pretty wild. All things considered I’ve been great. I’m very fortunate and grateful we’ve got our health. My wife and I have really enjoyed the time together. It’s the most time we’ve spent together. You always have to find the bright spots in dark times. You gotta make margaritas when life gives you lemons, as they say. I’ve got to spend the last 11 months straight with my daughter. I’ve got to slow down for the first time in a long time. It’s made us take a step back and take inventory of where we are at, and we decided we were ready to move. We’ve moved out to Tucson, Arizona, out to my hometown where I grew up, which is really exciting, a huge change. I’ve been in Texas for the last six years. I think during this pandemic we realised that we were able to be based in a different place and maybe go to a new spot for a next chapter and more inspiration, because that’s what we were looking for at this point. We’ve been writing like crazy for the new album and just kind of getting through it. I miss performing like crazy and I miss our fans. My heart goes out to all the artists that are are struggling to hang on. Midland, we’re in a fortunate position where it allowed us to go back to the drawing boards and create more. We’ve got a bunch of new music coming out and we’ve got a new album coming out next month with a documentary, which is really exciting. We’ve got an EP slated to come out, probably in the spring, and then a full- length album next summer. I think close to getting a vaccine and then I think we’ll be close to getting back to some sense of normalcy when it comes to live shows, and I think that’s what this world needs right now.

I’ve said it before, and I believe it more now than ever, I think music is one of the most important things that humans create, and that humans commune and enjoy together. I do think the world is better off when people are getting together and getting inspired, and maybe forgetting your troubles for a couple of hours. In that process, maybe you come away with a new perspective on things. I think we could use that, we could use some joy, and some light. It’s been a tough year for everybody but we’re getting through it. Anytime I feel bad, I just try to take perspective and think about those people that have it way worse. Overall, we’re doing great and it’s been a joy to slow down and just write, and exercise that muscle again, which has been a blast. I’m really excited about all this music that we’ve got coming out.

Yeah, maybe the third time’s a charm. Everything happens for a reason. When we do get back over there, it’s just going to feel that much more special and it will be because one of our favorite things to do is to go overseas and play. Some of my favourite memories, and my most fond memories of being a musician on stage, and then just being a citizen of this earth, is playing on stage and then getting to enjoy the beautiful culture in the UK. You know, going to museums and going to pubs, and beautiful restaurants and shopping and just meeting people on the streets. It’s such a joy, it’s a blast. We can’t wait. We’re as excited and anxious as all the fans are to get back out there.

You’ve really been building some special here in the UK. Since you played C2C and then the headline gig at the Omeara, and then in 2018 at Shepherd’s Bush Empire as part of your headline tour…

That’s the last time we saw each other was at Shepherd’s Bush right?

It was! Just before Christmas…

For me as a performer and as an artist that was one of the shows I’ll tell my grandkids about. To get to play such a legendary venue where so many of my heroes have played. It was cool to have my friend Fearne Cotton there. Fearne’s married to Ronnie Wood’s son so it was cool to have a connection with The Stones, they’re one of my favourite bands. The whole thing, at this point, it seems a little bit surreal. I do know that we’re going to get back to it and I know that the the appetite is there to get back together and gather. As soon as it’s safe for everybody, or we can find a protocol to keep our fans safe, then we’re going to do it. The last thing we want to do s to be responsible to endangering any of our fans. I think we’re close. I think we’re definitely within a six month window of having a valid vaccine. We just all got to take a collective breath, enjoy the holidays, and in the meantime we’re going to be putting out a bunch of new music for the fans to gobble up. It’s going to be a whole new set, by the time we get out to see you guys. It’ll be a set that we’ve never performed and you guys have never seen. We haven’t even created it yet. At this point, it’s something I haven’t seen yet either but it’s going to be packed with all-new music and a whole different show. It’ll be cool.

If I’ve learned anything about Midland over the years, it that you guys always surprise us. Even when we know all the songs you’ve put out, you throw in a bunch of covers we’re not expecting, like the Chris Isaak ‘Wicked Game’ cover you did last time you toured here. You like to keep us guessing don’t you?

Yeah, I think that’s as much for the audience as it is for us as a band. You want to keep it fresh and you want to stay inspired because essentially, when you’re playing music, it’s inspiring yourself. You are doing this thing for yourself as a musician because you love it so much. It’s like a drug, a much healthier drug than some other things I’ve tried before, the healthiest one I know of. It really is this love and this mutual admiration for for one another on stage. When we’re doing these covers, these are songs that we sat around as teenagers and fantasised about. We were inspired by them and dreamed about being an artist, like some of these guys, like Chris Isaak or Bob Seger and the Silver Bullet Band’ ‘Turn the Page’ or ‘Tougher Than the Rest’ by Bruce Springsteen, we covered that and put it out there. Our friend Rob Light who’s the head of CAA out here in the United States, which is our agency, he’s been Bruce Springsteen’s agent for 35/40 years.

When we cut that we personally asked Rob, ‘will you please make sure that The Boss hears this, and let me know what he thinks?’ We didn’t hear anything from Rob or from The Boss for many months. We were all very depressed because we figured that Bruce was very upset that we had dropped the third verse and doubled the bridge, and probably didn’t like it. Then I ran into Rob at one of the awards shows, I think at the CMAs about six months later, and I said, ‘shit man, so Bruce really didn’t like that version?’ and he was like, ‘what are you talking about? No, he loved it! Oh, didn’t I ever tell you? I didn’t write you back? Oh yeah, he heard it. He loved it.’ I said a bunch of expletives and cursed him up and down and then we laughed and hugged. That’s part of the joy, is getting to do those covers because we’re just like our fans, we’re still fans of music as well. It’s all really special for us. I think that’s what translates in the live show and I think that’s what our fans and critics alike recognise in us, is that at our core, we’re just bar musicians that can’t believe that we’ve made it this far.

With all this new music you’ve been writing, is this the year we finally get a Midland Christmas song?

You know what, I think maybe now that you’ve said that, I think maybe I’m gonna call Jess and Cameron after this and see. We have a song that we wrote with Dean Dillon, who is a very famous American songwriter. He wrote a bunch of the hits with George Strait He’s very prolific and used to have a band with Gary Stewart. We actually wrote a really great song with Dean Dillon’s daughter, Jessie Joe Dillon. The song itself was maybe a little too lyrically explicit. We got a little wild on it but we realised that it’s in a perfect tempo and melodically it sounds like a Christmas song so I think we’re gonna turn it into a Christmas song. Maybe I’ll write it this week. The answer is there’s a 50/50 chance you’ll hear it. We’ll just put it out there.

I need to hear it. This can be your Christmas gift to me Mark…

Pip, I’m gonna do it for you. I’m gonna make it happen. As soon as I’ve done moving in my house and I get Internet, I’ll get in the studio and set that up and we’ll do a little Christmas jingle for you.

I’m going to hold you to that. I can’t wait! I know your fans here in the UK can’t wait to see you back in the UK because we all miss you…

We miss you guys too, Pip. It’s great to see you! Keep the hair growing. Let’s see how long we can get it.

You realise it’s going to be down to my knees by the time you get over to the UK?

No! It’ll be sooner than that. We’re close.

Midland’s rescheduled European tour is on sale now and you can grab tickets from MidlandOfficial.com.