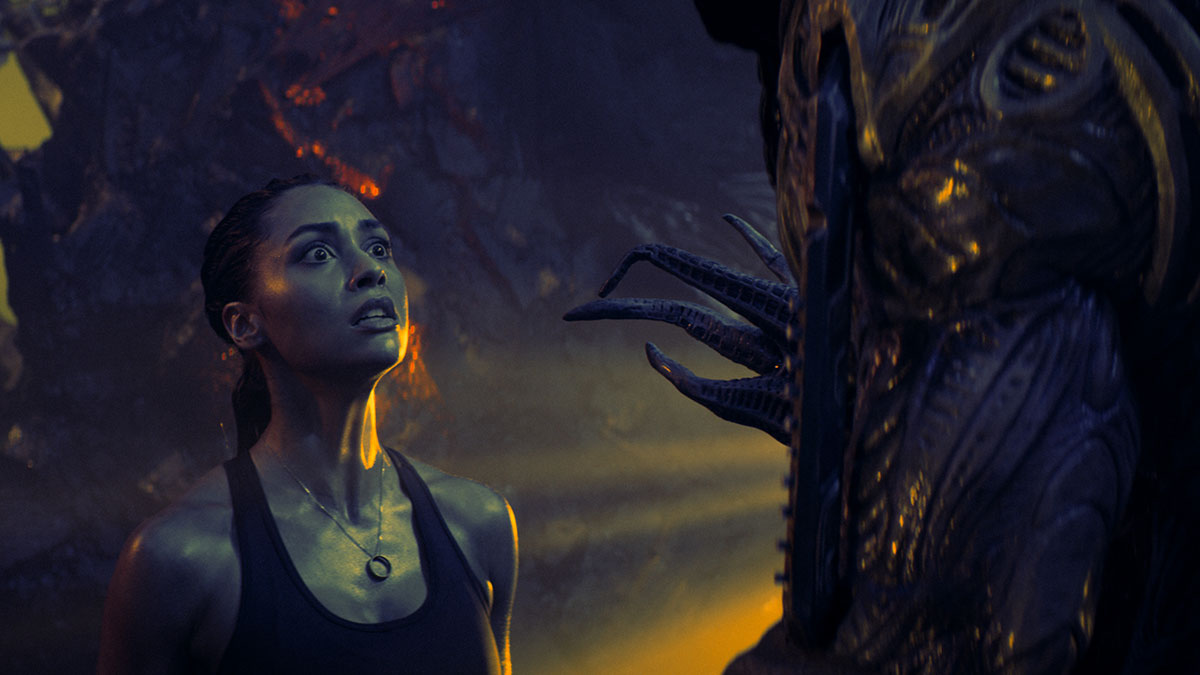 Several years have passed since the alien invasion of Earth began and the ‘Pilots’, a killer breed of extraterrestrials, have had their biology altered so they can coexist peacefully with humans on Earth. A virus emerges that undoes returns the ‘Pilots’ to their natural instincts causing General Radford (Alexander Siddig) to call upon Captain Rose Corley (Lindsey Morgan) to lead a team of elite soldiers on a mission to alien planet Cobalt 1 to save humanity.

‘Skylin3s’ is the third film in the ‘Skyline’ franchise and it follows directly from 2017’s ‘Beyond Skyline’ picking up the story of Rose. Written and directed by series co-creator Liam O’Donnell, the film is an ambitious science-fiction thriller that will make fans of the previous two films happy. I should point out that it’s not completely necessary to have seen the other films as ‘Skylin3s’ opens with a recap of the events that have taken place so there’s enough context there to watch this one and understand what’s going on.

The film wastes no time in throwing you into the action and the pace stays pretty fast for the entire 112 minutes. As far as the action goes, there’s nothing to fault here. The battle scenes feel big and relentless, at times making you feel like you’re right in the middle of the action by Rose’s side. Science-fiction fans will be able to see O’Donnell’s influences with the film evoking the likes of ‘Alien’ and ‘Predator’. The story builds on what has come in the earlier films and the cast of characters is established well.

The big pull here is the action and there’s plenty of it. ‘Skylin3s’ looks absolutely fantastic and it has the visuals and stunts to compete with the big blockbusters. The world that O’Donnell has brought to life is mesmerising and at times jaw-dropping. It feels incredibly vast and the set design in particular is very impressive. In fact, a bloopers reel at the very end shows you just how much work the set and costume designers did, with much less reliance on green screen for this instalment.

Lindsey Morgan, best-known as Raven in ‘The 100’ makes for a superb lead, easily carrying the wright of the film on her shoulders and showcasing her abilities impressively. She’s quite a force to watch onscreen and this kind of role really suits her. She has an easy chemistry with Jonathan Howard who plays soldier Owens, a man who initially is against the ‘Pilots’ but starts to sympathise with them when he gets to know Rose’s ‘Pilot’ brother. Alexander Siddig is good here too, as the man who pulls Rose into the middle of the situation when he realises the devastating consequences of the virus.

‘Skylin3s’ is a solid science-fiction film that looks fantastic and it serves up exactly why you want it to. The action is non-stop, the heroine is kick-ass and the story leaves enough open for a fourth instalment should O’Donnell choose to continue the franchise. If you like your science-fiction packed with action and strong visuals, you’ll love everything about ‘Skylin3s’.