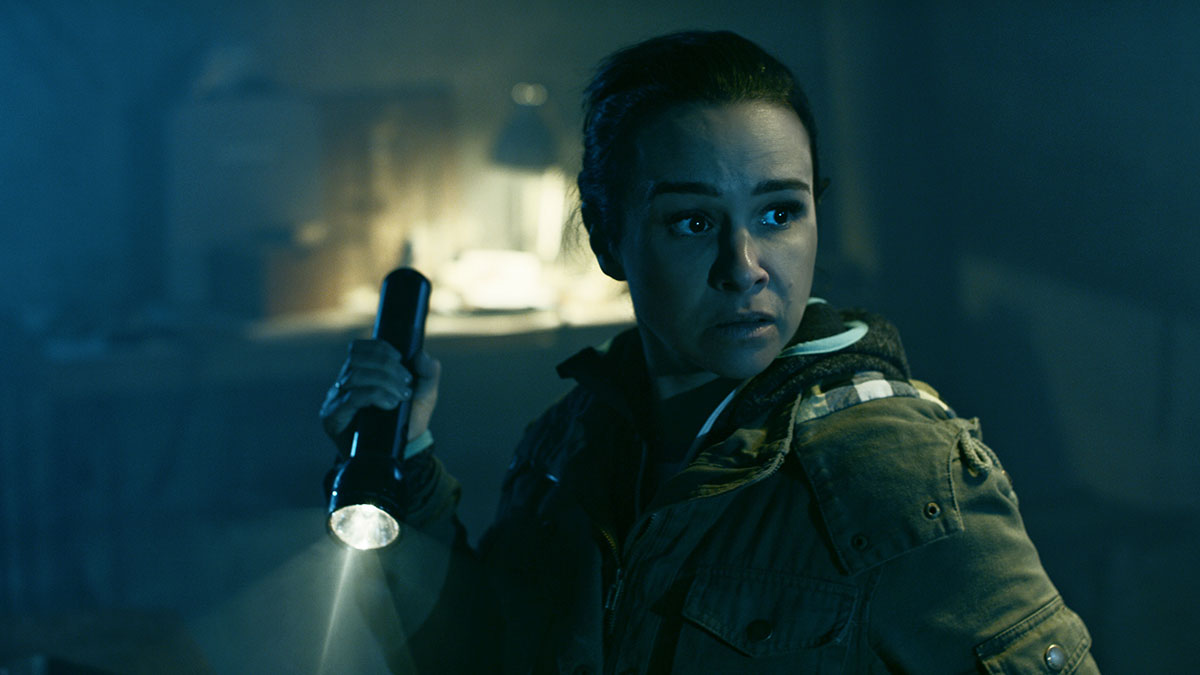 Max (Damien Puckler) is obsessed with the murders that took place at Redwood Farm twenty years earlier. He convinces a group of bereaved family members including Laura Dempsey (Danielle Harris) and her father Tom (Jon Campling) to go on a trip with him to prove the existence of the burlap bag-masked killer, who has become an urban legend. Once they arrive at the farm, the tables turn as the group becomes the target but is it the infamous psycho?

‘Redwood Massacre: Annihilation’ is the follow-up to 2014’s ‘The Redwood Massacre’. Written and directed once again by David Ryan Keith, the film doesn’t require you to have any prior knowledge of the original film and this sequel very much stands on its own two feet. The film establishes in the opening moments that Max is actually a ruthless killer too, mimicking the kills of the Redwood killer and wearing the same mask. At one point we see him having sex with a corpse while the victim’s boyfriend looks on, tied to a chair. That scene is clearly in here for shock value but it’s just flat out distasteful.

Knowing that Max is a killer makes it very hard for the audience to understand why on earth Tom and Laura would agree to go on a trip with someone they don’t know. All the warning signs are there and Max’s behaviour is questionable from the beginning but for some reason they ignore all the red flags and go with him anyway. Even Laura’s friend Jen, who thinks Max is hot but creepy, puts logic to one side and ignores her gut instinct. That makes the whole plot completely ridiculous and perhaps hiding Max’s killer side until later into the film might have benefitted it.

Most of the film falls into the usual horror clichés such as people separating when they should know better, helpless ‘please don’t kill me’ vibes (which have never worked in a horror movie) and a predictable switcheroo that makes much less of an impact than the film-maker thinks it’s going to. Add to that some truly horrendous acting and what you’ve got here is a bit of a stinker.

The draw will undoubtedly be for Danielle Harris, who played Jamie Lloyd in ‘Halloween 4: The Return of Michael Myers’ and ‘Halloween 5: The Revenge of Michael Myers’, but even she struggles with the material. She’s by far the best cast member here but that’s not saying much to be honest.

‘Redwood Massacre: Annihilation’ is horror by numbers. You know how it’s going to start, finish and end, and there are no surprises along the way. I’ve not seen the original so I can’t comment if this is a step up, but it’s certainly not going to be a classic in the genre. With a poor script, questionable character choices and a complete lack of common sense, ‘Redwood Massacre: Annihilation’ is a damp squib of the likes I’ve seen far too many times before.