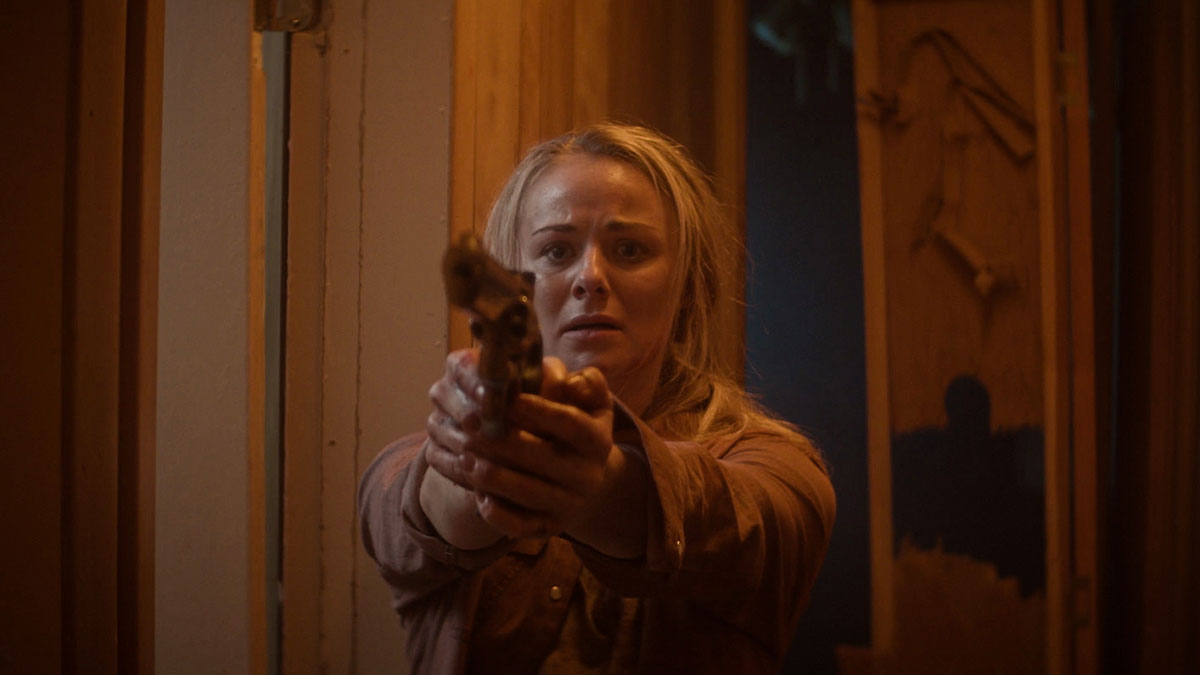 On Halloween nurse Romina (Lora Burke) finishes her shift and arrives home to discover Chris (Nick Smyth), a man she’s never met, holding Alan (Colin Paradine) hostage in her house. Drawn into the situation, Romina learns that Chris believes that Alan raped his daughter, something that was tried in court and Alan was found innocent. As Romina tries to play mediator between the two men, the night takes an unexpected turn when a biker gang turns up and all hell breaks loose.

For a film that only lasts 80 minutes, ‘For The Sake Of Vicious’ is a fast and furious thrill ride packed to the rafters with violence and gore. Writers and directors Gabriel Carrer and Reese Eveneshen, manage to turn a tense three-person drama into an all-out free-for-all and it’s pretty spectacular. Injected with flecks of humour throughout, the film puts you firmly on the side of Romina, a single-mother whose home has been invaded. She tries to flee but when she realises Chris isn’t going to allow that, she tries to get to the bottom of the argument between the men.

With Alan tied up, Romina and Chris quickly bond but she’s still reluctant to let him hurt Alan without knowing whether he did what he was accused of. At times she literally has to put herself between the two men to stop one from killing the other. Things get completely thrown on their head when a violent biker gang wearing Halloween masks force their way into the house. That means that Romina, Chris and Alan have to put aside their differences and work together to survive.

The shift between the first half and the second half is huge but it works. What could easily be translated into a tense stage play turns into a relentless and lengthy fight sequence as the trio face-off against the intruders. Not since the TV show ‘Banshee’ have I seen such well-choreographed and stylised violence, and it’s actually incredibly impressive. The three central characters constantly move around into different duo formations as they fight to survive, and the blood pours (and spurts) in large amounts.

The three leads are brilliant. Lora Burke is the standout, completely believable as a woman who has to quickly toughen up and fight back in order to survive. She’s good at drawing out little comedic moments too and her performance is a real tour-de-force. Nick Smyth and Colin Paradine are excellent too, both playing characters that keep the audience guessing. Together the trio is very entertaining, and they play off one another incredibly well.

‘For The Sake Of Vicious’, for me, has been one of the best films at the October edition of Arrow Video FrightFest. It’s a refreshing twist on the home invasion genre and the fight scenes are truly jaw-dropping. Add to that a superb set of actors and ‘For The Sake Of Vicious’ has all the makings of a cult classic. I absolutely loved it and I can’t wait to watch it again.