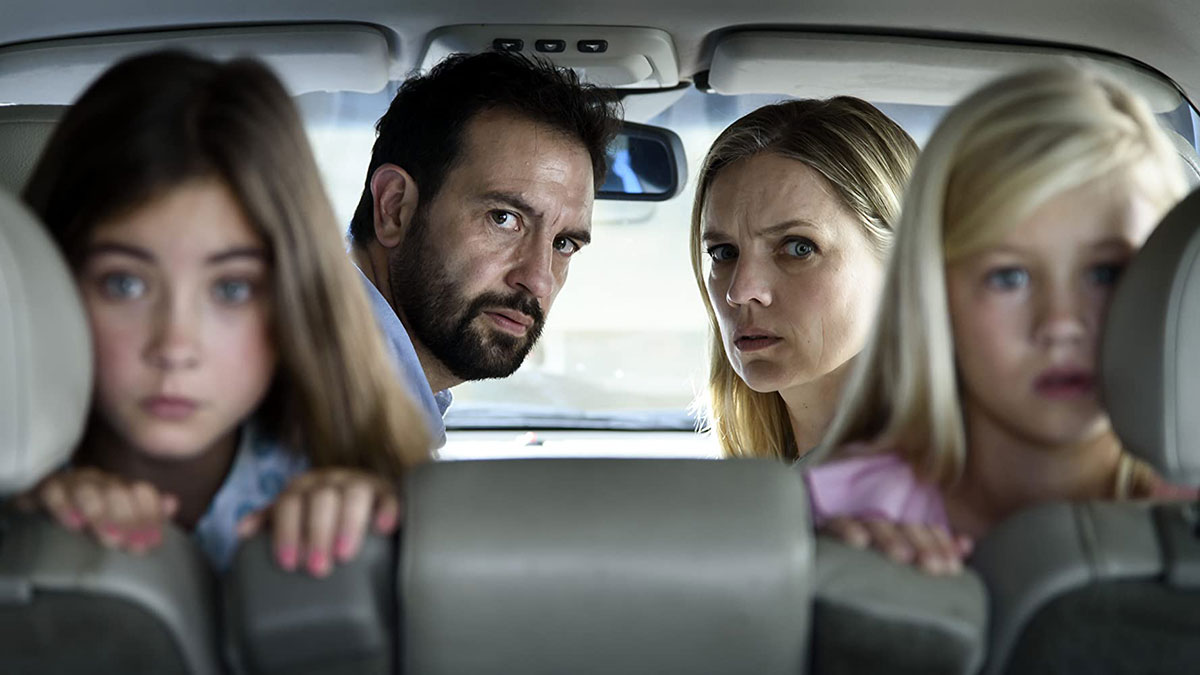 Hans (Jeroen Spitzenberger), his wife Diana (Anniek Pheifer) and their two daughters Milou (Roosmarijn van der Hoek) and Robine (Liz Vergeer) clamber into the family car to travel to Hans’ parents’ house. During the drive, the family encounters white van driver Ed (Willem de Wolf) who is driving slowly and after getting frustrated, Hans decides to overtake him while making rude gestures. When they stop at a service station the family comes face-to-face with Ed, who didn’t take kindly to their behaviour, and a battle begins as Ed follows the family on their journey to exact his revenge.

‘Tailgate’ has been compared to Steven Spielberg’s ‘Duel’ and it’s no surprise. The two films have a very similar premise with the difference being that ‘Tailgate’ involves a family whereas ‘Duel’ didn’t. Hans, the patriarch of the family, is an aggressive road-rage prone driver who simply can’t control himself when he loses his temper. This plays out in the service station scene where Diana is begging Hans to walk away from Ed but instead he squares up to him, escalating their feud to a whole new level.

If you’re quite a nervous person, I definitely wouldn’t recommend ‘Tailgate’. The film is incredibly tense and at times stressful as Ed relentlessly pursues Hans and his family. Every time they come face-to-face, the results are increasingly scarier, with Ed donning a hazmat suit and spraying some kind of chemical at the family every chance he gets. There’s one beautifully played out scene where Diana is behind the wheel trying to get the car out of some mud that its stuck in and Ed is calmly gathering his tools of torment.

Where the story veers away from that of ‘Duel’ is in the second half when the pursuit moves away from the road. I don’t want to say too much more but the tension becomes almost unbearable. At times I questioned whether the family would ever be able to break free from Ed and I’m not going to tell you if they do or not – you’ll have to watch the film for yourself.

The performances from the entire cast are superb. Jeroen Spitzenberger and Annek Pheifer have an easy chemistry, convincing that they are two people who have been married for a while. The way their characters bicker is brilliant and they come together when they need to, to protect their family. Willem de Wolf, who looks like a kind gentle man, is terrifying as Ed and to be honest, I’ll be careful next time I speed past a white van on the roads.

‘Tailgate’ might not have the most original premise but it’s a hell of a thrill-ride. It’s tense, gripping and hugely enjoyable. The film does what you want it to and nothing more, and for 82 minutes you won’t be able to take your eyes off the screen. I loved every second of it and I’m already itching to watch it again.

‘Tailgate’ will be released on Digital HD on 26th October by Signature Entertainment.