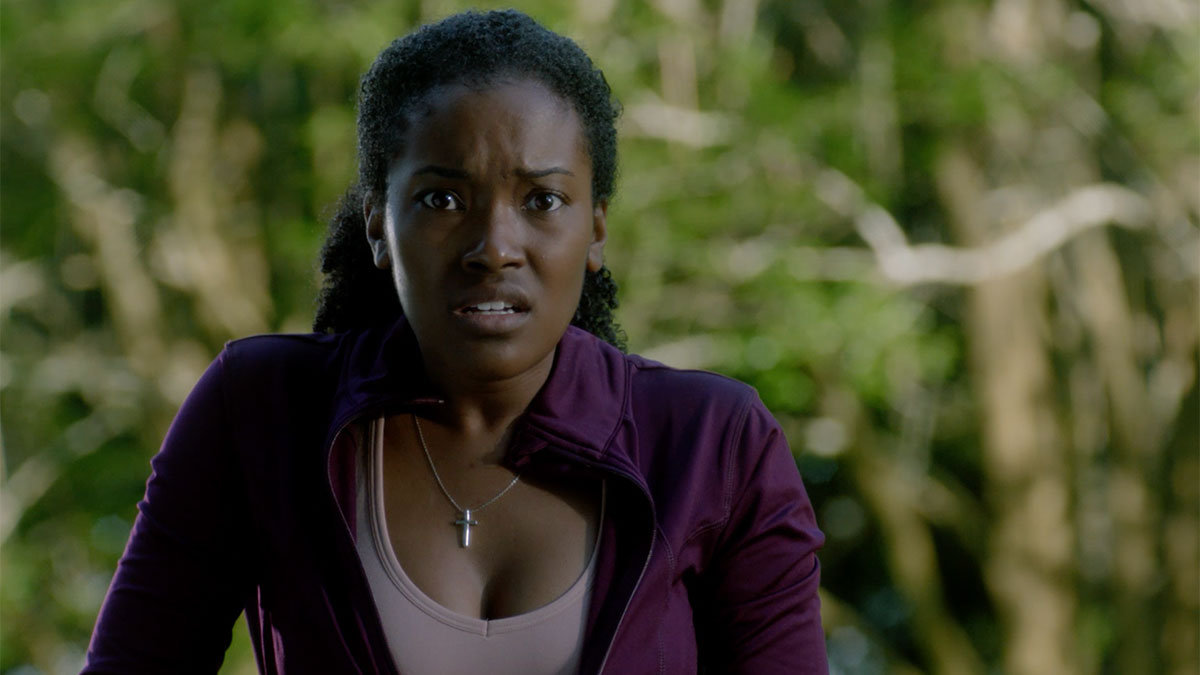 Caitlin Kramer (Kourtney Bell) witnesses the brutal murder of her father at the hands of home invaders. Left for dead, Caitlin recovers and nine months later as she’s trying to rebuild her life with boyfriend Josh (Skyler Hart), she witnesses a man getting beaten to death in the park. While she initially does nothing, the other witnesses film the incident, and Caitlin eventually calls the police to intervene. Following the man’s death, the lives of the witnesses are thrown into danger as someone, or something, is out for revenge.

‘Don’t Look Back’ is the directorial debut of Jeffrey Reddick, the creator of the ‘Final Destination’ franchise, and there are a few similarities between this film and the ‘Final Destination’ concept. Both films work around the idea that death is inevitable so trying to cheat is, isn’t the most worthwhile way to spend your time. The twist here is that the plot focuses more on the idea of karma, with the group of witnesses who did nothing to intervene in the death of Douglas Helton (Dean J. West), a local philanthropist, getting their just desserts for their actions.

At the centre of it all is Caitlin, a young girl who’s already had plenty of trauma (which unfolds in the brilliant opening moments) and who technically died before being brought back to life. When she’s haunted by Douglas after his death, she wonders if her brief death has given her a connection to the paranormal world. As Caitlin grapples with not having done more to help Douglas, she’s pulled into the world of her fellow witnesses who are being protected by Detective Boyd (Jeremy Holm) from Douglas’ grieving brother Lucas (Will Stout).

Believing she’s seeing signs all around her, Caitlin takes it upon herself to bring the witnesses together and stop anything from happening to them, and what ensues is a tense thrill-ride that manages to delight and surprise in equal measure. Reddick knows how to write suspense and he’s a master of crafting inventive and shocking deaths, so horror fans can go into this film knowing they’re in a very safe, and capable, pair of hands.

Kourtney Bell is a revelation as Caitlin. She’s makes a very good case for being a new kind of Scream Queen for the modern age and her performance here is brilliant. Despite her character’s circumstances and trauma, she’s never a victim and Bell finds Caitlin’s strength and resolve impressively. What’s quite unusual for a horror film is that you actually care about Caitlin and I think the last time I really rooted for a final girl was Sidney Prescott in the ‘Scream’ franchise.

The supporting cast around Bell is strong too. Jeremy Holm, who delighted horror fans in ‘The Ranger’ gives a strong performance as does Skyler Hart as Caitlin’s handsome but potentially iffy boyfriend Josh. There are also nice cameo roles from Bryan Batt (‘Mad Men’) and Rainn Wilson (‘The Office), which add to the overall film.

‘Don’t Look Back’ took me back to the halcyon days of horror back in the late 90s and early noughties. The film can sit happily next to the likes of ‘Scream’, ‘I Know What You Did Last Summer’, ‘Urban Legend’ and of course ‘Final Destination’. With a strong central performance, a gripping story and some great surprises, ‘Don’t Look Back’ is a real treat for horror fans and I heartily recommend you seek it out.