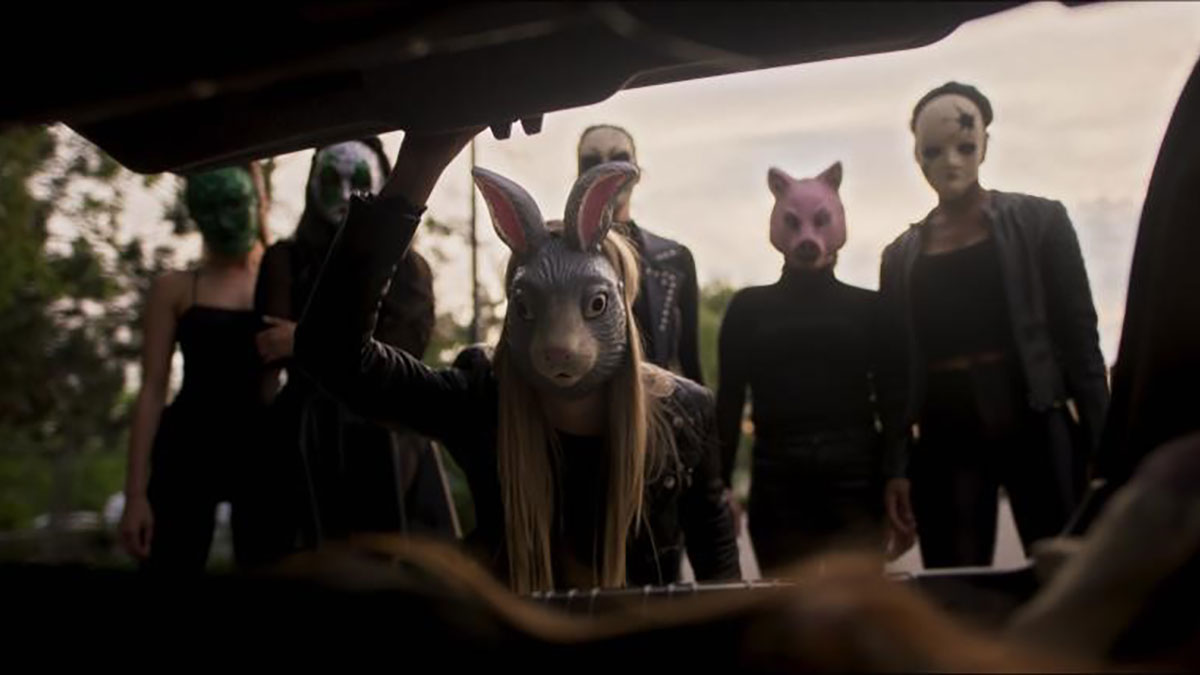 Grace Carver (Kaitlyn Bernard) is the leader of a clique at her religious school where each of the members represents one of the deadly sins. When Grace believes that one of the group, Aubrey Miller (Brenna Llewellyn), has broken her confidence she plots along with the other girls to scare her into towing the line. After carrying out their plan, Aubrey goes missing and then one-by-one the other girls start to disappear.

‘The Sinners’ (known as ‘The Color Rose’ in the US) is from writer/director Courtney Paige and its premise is a cross between ‘Heathers’, ‘Cruel Intentions’ and ‘Riverdale’. On paper that sounds like it should work and for the first hour of the film, it does. ‘The Sinners’ introduces us to a bunch of despicable mean girls who are bound together by their unpopularity and their outside statuses. With Grace at the helm, the girls are prepared to do whatever they’re told so they don’t think twice about hopping on board with Grace’s plan to scare Aubrey.

Once Aubrey goes missing, Grace and her closest friend Tori (Brenna Coates), who she’s secretly dating, go into a tailspin worried that the disappearance will be traced back to them. The plot them moves in a new direction with the girls being picked off one-by-one by a masked killer but unusually we don’t really see the kidnappings or the events that lead up to the murders. There’s a glimpse here and there but most of the time, the first you know a girl is dead is when the body is shown lifeless on screen.

In the second half of the film things start to fall apart. The film makes you go through the familiar horror whodunit trope, which is fun, but when the climax arrives and the killer is unmasked, you’ll likely ask yourself ‘who?’ rather than feel it was a rewarding finish to the film. A further twist attempts to be clever but it unfortunately just winds up being completely unbelievable. It’s a real shame because up until that final 30 minutes, ‘The Sinners’ was a solid, contemporary twist on the slasher genre.

The large cast puts in strong performances. Kaitlyn Bernard is the standout as the wildly rebellious and devious Grace, embodying the mean girl leader and playing her with absolute relish. Tahmoh Penikett is impressive too in a supporting role that sees him playing against type. He plays Grace’s preacher father and his performance is incredibly intense.

‘The Sinners’ had all the ingredients to be a fantastic film but sadly it’s let down by the last 30 minutes. Until that point everything was fitting into place – great acting, an intriguing story, it looks visually interesting and the soundtrack is killer. Unfortunately the ending feels like a slap in the face and it left me scratching my head rather than feeling satisfied.

‘The Sinners’ will be released on Digital HD in 2021 by Signature Entertainment.