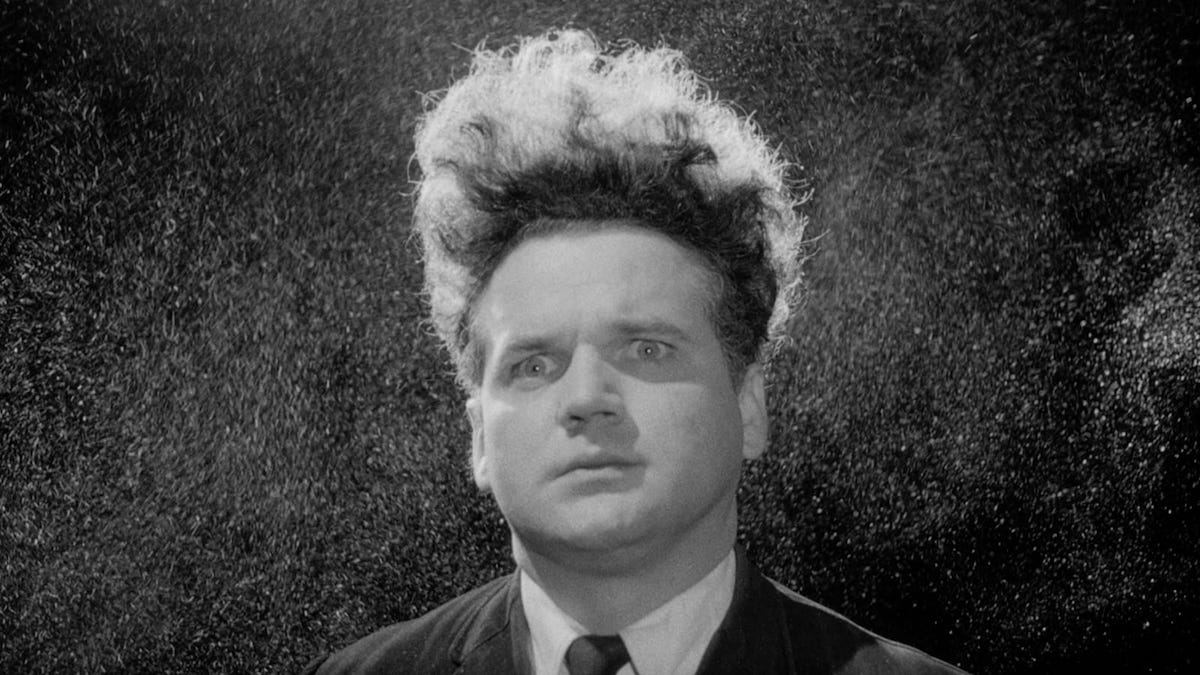 David Lynch’s startling debut feature Eraserhead enters the Criterion Collection (UK) this week. A surreal and nightmarish depiction of fatherhood, the film’s remarkable singular vision announced one of cinemas most distinct artistic voices to the world. Weird, horrifying, and strangely hilarious, add this to your Halloween playlist for a truly disturbing experience.

For those unfamiliar with Eraserhead, the film tells the story of Henry (Jack Nance) who learns that his ex-girlfriend Mary (Charlotte Stewart) has had a baby which is his. The couple move in together in order to care for the child, which was born prematurely. Now, you might ask at this point, what is weird, horrifying, and surreal about that? Well…

Drawing heavily on the likes of Cocteau, Bunuel, and Fritz Lang, Lynch places his odd little domestic story in a world of dreamlike (or should that be nightmare?) imagery, where the strangest corners of the subconscious have manifested in the physical world. So Henry, who is reluctantly dragged into being a father, imagines his life is being controlled by a man pulling levers on another planet. When fantasizing about escaping this life, he imagines a woman lives inside his radiator and sings to him.

He lives in a strange and toxic industrial hellscape, and his apartment is full of rotten vegetation. The sequence at Mary’s parent’s house, when Henry learns of the child is a psychosexual freakshow (complete with man-made-miniature poultry) and surely a contender for the most excruciating dinner scene in movie history. Then there’s the child. A mutant overgrown embryo, held together by bandages, mewling and crying every minute of the day. So to conclude, it’s not your everyday domestic drama.

Tapping into some of the visual and aural motifs that would run throughout his career, Lynch’s experimental masterpiece is an almost unique sensory experience. Eraserhead isn’t just a film you watch, it’s a film you must hear. The unnerving soundscape of the film is extraordinary. An ever-present discordant cacophony of organs and industrial machinery clanking and growling. It’s a nerve-fraying, teeth-grinding soundtrack, which perfectly complements the surrealist visuals on the screen.

Speaking of which, thanks to a stunning 4K digital restoration, this transfer of the film looks incredible. The picture is a clean, vivid monochrome, and the uncompressed stereo soundtrack is nothing less than an assault on the senses. It is a terrific upgrade. Over the years, I have owned this film on VHS, DVD, and Blu-ray, and this edition is comfortably the best yet. For further detail on how to get the best viewing experience, David Lynch has kindly provided instructions in the special features on how to best adjust your TV settings.

This release also comes with five short films directed by Lynch, spanning his early experimental animation in the late 60s to more recent offerings in the mid 90s. Each film comes with an introduction from the director. The shorts included are, Six Men Getting Sick, The Alphabet, The Grandmother, The Amputee, and Premonitions Following an Evil Deed.

The rest of the features are categorized by year. First up is 1977, which is the original trailer for Eraserhead. 1979 is a 17-minute interview with Lynch and cinematographer Frederick Elmes, conducted at one of the film’s industrial locations.

1982 is the trailer for Eraserhead used by the Nuart Theater when they used to screen the film for the Midnight Movie crowd. It consists of Lynch sat on a couch with five Woody Woodpecker stuffed toys expressing his thanks to the fans and to the Nuart for their support of the film.

1988 is a short excerpt from French TV show Cinéma de notre temps, featuring Lynch and Jack Nance driving to one of the film’s locations. 1997 is a series of interviews with Lynch, Nance, Charlotte Stewart, and Catherine Coulson, filmed as part of Toby Keeler’s documentary ‘Pretty as a Picture: The Art of David Lynch.’

2001 is the main event of the special features. Eraserhead Stories – an 85-minute documentary about the making of the film, directed by Lynch himself. Finally, the disc wraps up with 2014, a 25-minute segment of interviews conducted by the Criterion Collection, featuring Catherine Coulson, Charlotte Stewart, Judith Anne Roberts, and Frederick Elmes.