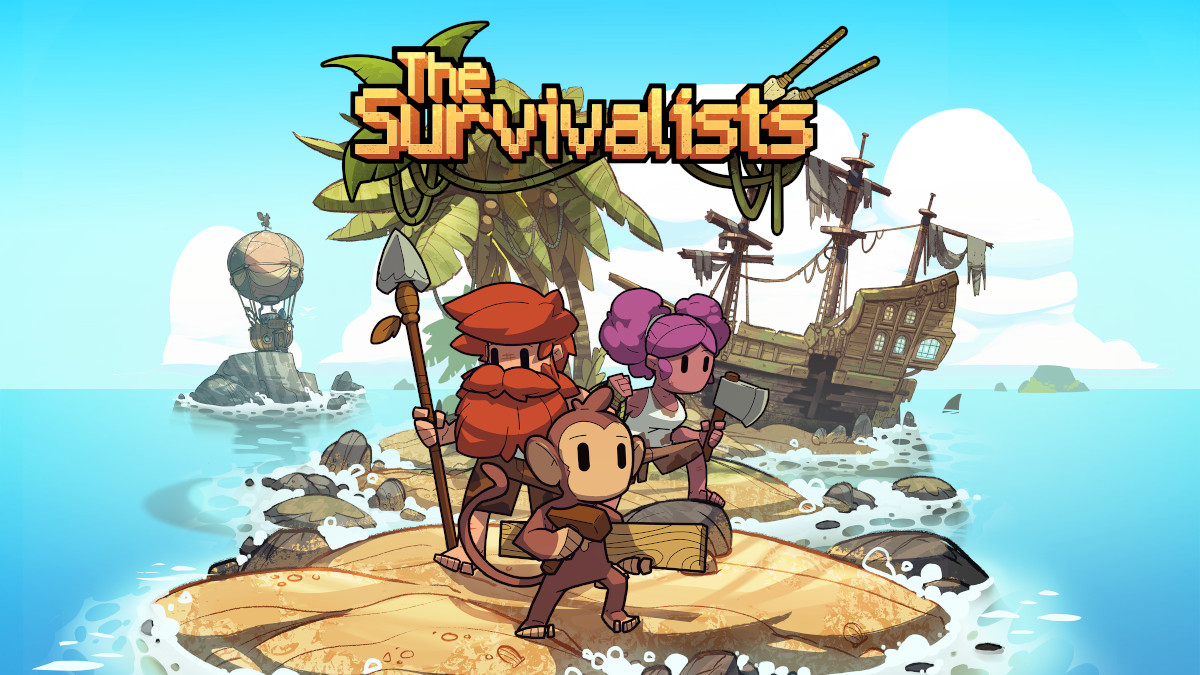 The Survivalists is the new sandbox survival game from Team 17. Looking very similar to The Escapists your task is ultimately to escape the islands you find your self shipwrecked on. Through exploration, crafting and dungeon delving you’ll find all of the items you need to complete your escape. Oh, and you also get to control a mokney army. Yes, a goddam monkey army.

You begin your journey as you wash up on the shores of a mysterious island with nothing but the shirt on your back. To start with you’ll have to scavenge for what you need. Using pebbles from the beach you can create your first item, a basic hand axe, which will help you gather resources quicker. Very quickly you’ll be building a bed (you need this to save your game) and starting to piece together a rudimentary base.

Watch The Survivalists reveal trailer below:

Crafting is a significant part of the game with new crafting recipes becoming available each time you build the item before it in a chart. This is a nice way of encouraging you to build everything if only to see what you unlock next. Crafting is pretty simple, take the required ingredients to the crafting bench, equip a multitool and off you go. You can craft items ranging from basic tool handles and straw bales to complicated metal items and powerful weapons. Other than the cosmetic items available, everything that can be crafted is useful in some way.

Whilst most of the basic resources are readily available, you’ll have to do some exploring in order to obtain all that you need. Each island contains various vaults which contain better items or materials upon completion plus there are resources you’ll find on some islands that you won’t find on others.

I found the exploration aspect of the game really fun. At the start, I didn’t realise that there were multiple islands but after setting sail of the raft I’d just built and discovered more land I had somewhat of a revelation. When you do decide to explore make sure you stock up on food supplies and weapons and most importantly ensure you take a few members from your monkey army to help you.

The monkeys are the key to success in The Survivalists. They can be recruited by either giving them a bowl of crafted monkey food or rescuing them from cages. Once recruited they stay loyal forever and effectively become your slaves. They can be taught to craft, to move items, gather resources and fight to name but a few jobs they can carry out.

In order to get them going with a task, you’ll need to show them what you want doing, it’s literally monkey see, monkey do. Before long you’ll have your monkeys churning out items and building at a fair clip. Your monkeys can also be trained to fight and you’ll need these skills in order to complete the various vaults and labyrinths.

Getting the monkeys set up and working is very satisfying and takes much of the grind out of the game. On the downside, the monkey AI is not too bright and the UI for controlling them is awful. For example, I would often take my monkeys out in force to gather resources. This makes things much more efficient but they would often get lost, meaning that when they couldn’t find resources to gather they would simply stand there doing nothing rather than coming back to you for direction. They would often do this when standing right next to the resources they should be gathering. They also don’t know what to do should the tool they are using breaks. Once again it would be nice if they came back to you or had the intelligence to pick up and a new tool should one be available.

Monkey combat can also be a bit random. When it works your monkeys can mow down anything with ease but when things break down they just lead to frustration. Sometimes they will charge ahead of you obliterating everything in their path, others they’ll quite happily stand and watch as you get pummeled to death by an Orc.

Controlling the monkeys can also be a chore. With just one or two monkeys things are easy but when you start to gain more things can break down pretty quickly. To allocate jobs you need to select the particular monkey(s) and show them the role. You’ll need to do this each time you allocate a task, even if it’s something your monkeys have done a thousand times before. It’s also a challenge to see who is doing what. There is a tab in the menus designed to help with this but it’s all but useless.

My final point on the monkeys is a game-breaker for me. On two separate occasions, after playing for about four hours my monkeys simply stopped responding in any way whatsoever. This just ground everything to a halt and meant I had to restart the game from scratch. If the game did this to me when I was twenty hours in I’d be launching my PC out of the window.

To sum up, The Survivalists is a pretty cool game. It encourages you to explore, looks nice and challenges you to think about how to use the monkeys most effectively. Sadly, the thing that should have made the game great is also its biggest failing and that’s the monkeys. When they work the game is fantastic, when they don’t the game isn’t worth playing. I’d be interested to see what the developers do with the game going forward as if they can get this aspect of the game working properly it could be truly amazing.