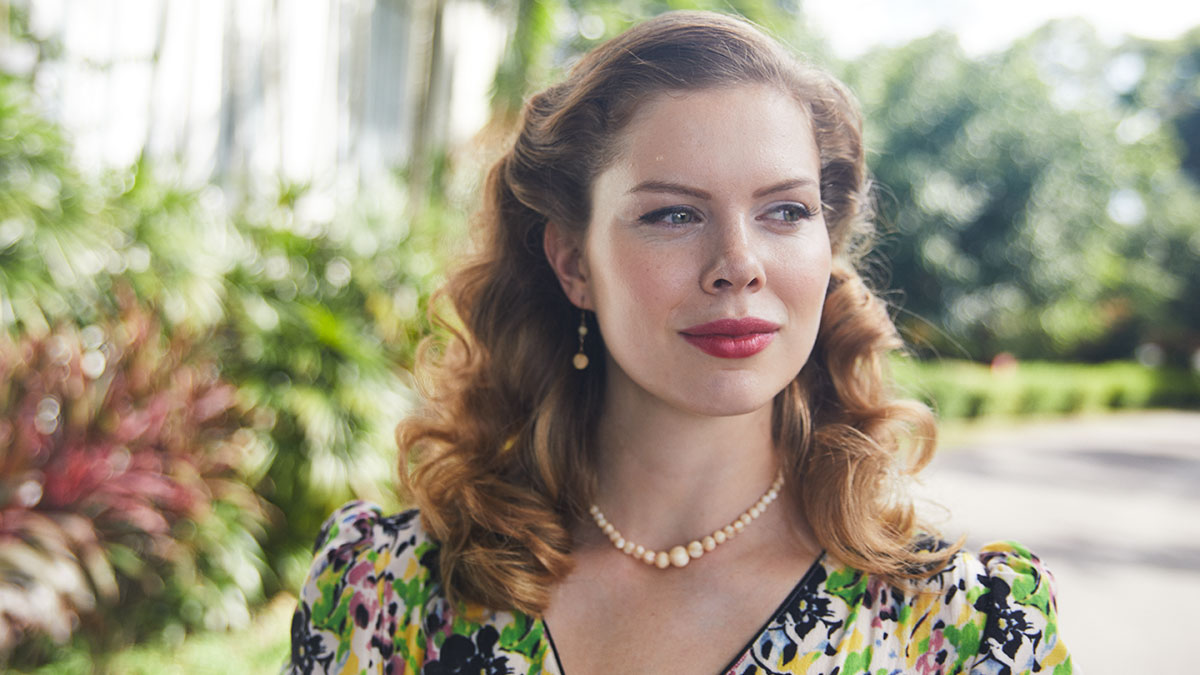 Australian actress Georgia Blizzard is one of the leads of ITV’s big new series ‘The Singapore Grip‘, which begins on Sunday.

Ahead of the series premiering, I caught up with Georgia to find out what viewers can expect, talk about her character and discuss what it was like to film in Malaysia…

Hi Georgia. How are you today and how have you been coping during the pandemic?

I’m well thank you! It’s a sunny London day and I’m being sure to soak up every last ray as we inch out of the warmth and towards my first UK winter! I moved from Australia to London at the end of February and this time has been an emotional rollercoaster (which I think is a pretty universal sentiment); upswings and downswings, but all in all I’m in good spirits and I have a lot to be grateful for.

‘The Singapore Grip’ begins on ITV soon. What’s the show all about?

It’s a satirical drama set in Singapore at the time of the Japanese invasion in World War Two. At the centre of the show we have the Blacketts, a wealthy British family fighting to cling to their lavish lives almost oblivious to the horrific realities unfolding around them, and the entire piece endeavours to shine a critical spotlight on Britain’s colonial past.

You play the character Joan Blackett. What do viewers need to know about her going into the show?

Joan is this intoxicating mix of charm, glamour, wit and intelligence, but also greed, arrogance, and ruthlessness. She pursues her objectives aggressively and has no qualms chewing people up and spitting them out if it will help her advance in her plans!

The show has an incredible ensemble cast. What were they like to work with and who did you most enjoy scenes with?

Such a phenomenal cast! I truly loved working with everyone; I have a lot of two-handers with David Morrissey (who plays my dad), and observing the ways in which he approached the work was like getting a masterclass in detail and nuance. It was always a treat when we had a few of us there together; there’s a big event in episode 2 that involves a lot of the younger cast and was shot over several nights, that was a lot of fun and almost feels like a mad dream!

How did you get involved with the show and what attracted you to the role of Joan?

I was living in Sydney at the time, and when they hadn’t found their Joan in the UK they opened up the search internationally. It was quite a lengthy process; I filmed an audition tape in my cramped apartment kitchen, a couple of weeks later they asked me to tape again with some additional scenes, another few weeks passed and I was invited to skype with the director and producer, a month after that they asked me for a final tape, and finally they offered me the role. I was really attracted to Joan’s assertiveness; she’s in the driver’s seat of every relationship she enters and was so unlike the majority of young female characters I was auditioning for at the time.

What would you say was the most challenging aspect of playing this character?

Perhaps trying to cultivate the kind of confidence and entitlement that comes from a life where you’ve never been told ‘no’. Some of Joan’s actions are so bold and so outside of my nature as a person, but I knew if I looked at all hesitant it wouldn’t sell the essence of this woman who is so unapologetic in her pursuits.

The series was shot in Malaysia. What was that experience like for you?

I’d never been to Malaysia prior to the four months we spent filming there, so being able to explore that beautiful and varied country on my days off was an unbelievable perk. The weather provided a lot of logistical challenges; we were often left marvelling at the relentlessness of the thunder storms that halted our filming, and working in heat that intense was quite challenging…it’s one thing to try to exude glamour in an air conditioned room, it’s quite another when you can feel yourself dripping with sweat mid-scene!

Right now? A lot of knitting. A lot of crochet. Guitar, calligraphy, reading…trying to stay creative and sane! Obviously it’s been a very difficult time for our industry with all productions essentially ‘on pause’ and the future feels quite uncertain, but it’s heartening to see things slowly starting to move again and I’m excited to get back to work when the time comes.

‘The Singapore Grip’ begins at 9pm on Sunday 13th September 2020 on ITV. Watch a clip below:

In this article:Featured, Georgia Blizzard, ITV, The Singapore Grip