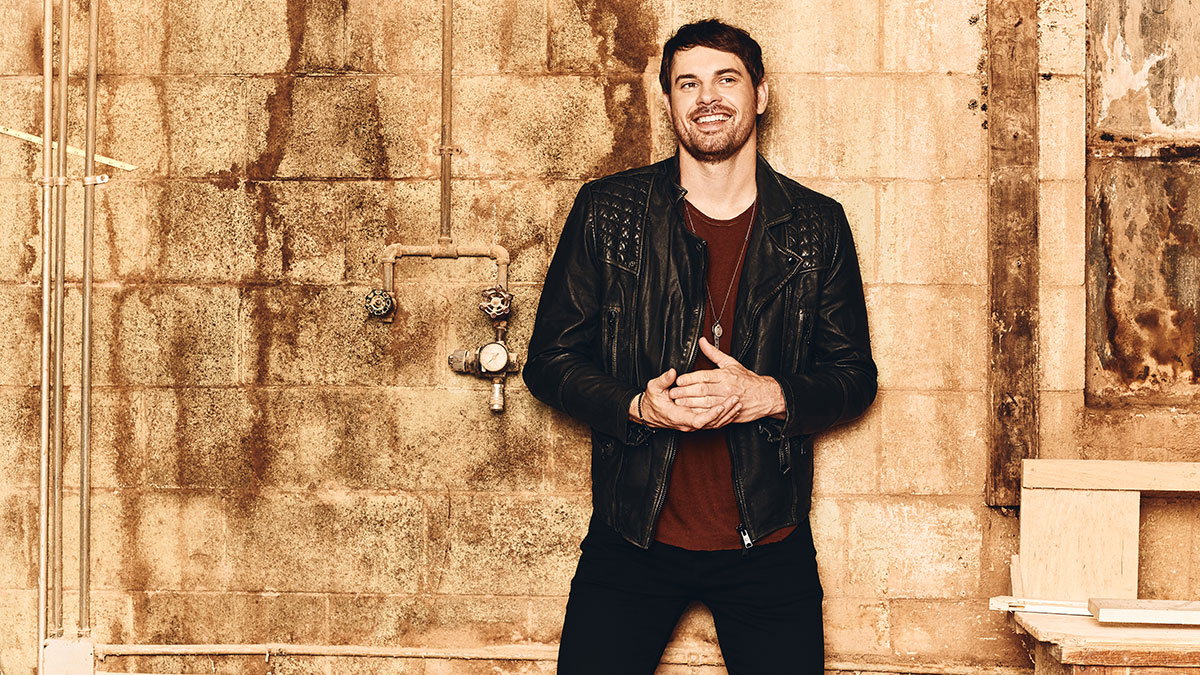 Country singer-songwriter Matt Stell had one of 2019’s biggest breakout hits with his number one Platinum single ‘Prayed For You’.

He followed that up with the release of his EP ‘Everywhere But On’ and the title track is rising fast on the Country charts. Over the summer Stell released new track ‘If I Was A Bar’ and he’s been keeping busy with his ‘Penned Up’ live streams on Instagram.

I caught up with Matt recently to talk about his incredible success, discuss the music video for ‘If I Was A Bar’ and find out about his upcoming music…

When we spoke last year ‘Prayed For You’ was starting to pick up some traction and now it’s a number one Platinum single. What’s that experience been like for you?

It was really surreal. I came in without much expectation of anything because I just really didn’t know… I knew we had a good song and hopefully people wanted to hear it but man, I never really dreamed that I would have a number one song and a platinum plaque or anything like that. I’ve always wanted those things but even still now it sometimes doesn’t seem real.

What do you think it is about that song was really connected with people?

From what I can glean from folks that have told me that the song means something to them, it could be a relationship, like in the song, or it could be a family thing with trying to have kids or jobs or school or anything like that. Anytime you’ve got some hardship to overcome, or anything that requires you to get in there and fight the good fight in hopes that good things will happen. I’ve even had a guy tell me that the song helped him get through prison and I certainly wasn’t thinking about that when I wrote it. The fact that the song can mean something like that to somebody is really special to me. I think it’s probably just that feeling that if you stick in there and if you hang in there long enough, you at least allow an opportunity for good things to happen. I hope that’s what folks are taken from that song because that’s really what we were meaning.

Having had that level of success with that song, does that make life harder for you in terms of following it up or does it take the pressure off a little?

Honestly, I sort of feel like I’m just playing with house money at this point. I didn’t have any expectations going in. I had hopes and dreams but you never know. Luckily, I’m part of a bunch of folks that are passionate about what they do and passionate about this project. Getting to work with them and watch them do their magic, I really just do the creative end of things and turn it over to them and let them do their job. It’s been a good recipe. I don’t feel any any pressure, I just feel grateful that I’m able to work with the folks that I get to work with, I’m able to make music and that they want to and have a passion for the music and want to help make it as successful as possible.

Your current single ‘Everywhere But On’ taken from your EP is really gaining momentum on the charts at the moment isn’t it?

At the moment it is man. It’s been a lot of fun watching that song go up the charts. It’s one of my favourite songs I’ve ever written. I’ve lived so much of the life in that song and I wrote it with two great friends of mine. The song is really personal and (it’s a song) I really, really love. It’s one of my favorites so to see folks responding to it in that way is really special and it’s just what you hope for when you’re writing songs and cutting songs. I hope folks continue to want to hear that one because it really is one of my favourites.

The EP is brilliant and there’s so much variety on there. One thing I would never have expected is to hear you covering Ariana Grande’s ‘God Is A Woman’ – it’s genius! How did that come about?

I’m glad you like it man. To me it just comes down, honestly, to ‘God Is A Woman’ is just a great song. It works like a Country song does in a lot of ways in that it turns an interesting phrase and something provocative into something a little bit different kind and it makes a left turn there. I love when a lyric does that and of course the melody is great. How does this work with this guy covering this pop diva song? That’s part of it too. All of that working together is what made it interesting to me. It was great fun and I still love that song.

Well, yeah, the trick is just to try not to sing it like her (laughs) and try to find a different way to do it because man she’s something else.

Over the summer, you’ve gifted us with a new track, ‘If I Was A Bar’. What was the inspiration behind that?

Dan Isbell, Jonathan Singleton and Zach Kale, three of my favorite songwriters in Nashville, wrote that song and they sent it to me the night they had it done and they were like, ‘man, I don’t know if you’re interested in this kind of thing?’ and I was like, ‘man that is right up my alley’. I love that kind of rowdy heartbreak song. Shoot, I knew before I was done listening to it that I wanted to be the artist that cut that and so I went to the studio and cut it, and we released it. We love playing it live and it’s shaping up to probably be our next single. That’s the song I’m looking forward to playing for a long time.

It looks like you had quite a lot of fun with the video as well. There’s so many versions of you in that. What was it like making that?

(laughs) Oh man! We had a great time making that. We were trying to be creative within the CDC guidelines in terms of how to operate during this time. Sometimes those constraints can help you creatively because you know the space you’re going to operate in. Dustin Haney, the guy that wrote the treatment and also filmed the video, that was his idea. It reminded me of all the of all ‘The Nutty Professor’ and ‘Coming to America’… all those Eddie Murphy movies that I love where him and Arsenio (Hall) are playing multiple characters. That’s what was on my mind. I loved, loved shooting that video and really like how it came out. It was a lot of fun.

Which was your favourite version of yourself to play?

Trying to play the fiddle player or playing the truck driver. It was a bunch of fun man, I really enjoyed it.

Since the release of ‘Prayed For You’ it really feels like you’re building something on an international level. How are you feeling about the support and fanbase you’ve built up these past 12 months?

I just feel really lucky that the music that I’m making is striking a chord with folks and so far away from home. When you’re writing songs and playing songs, you want it to affect as many people as possible. To know that it’s having that kind of reach in this day and age, man, it’s just really a dream come true. I can’t wait to get over there and meet some of those folks and hang out with y’all because that’s another great part about music is it’ll take you around the world. I look forward to that as well.

Obviously the pandemic has prevented you from doing any international touring but are you hoping to get over here once we get back to normal?

Hopefully. We’ll see. There’s testing protocols that offer some hope, mixing some old techniques and some new technology. Maybe they can get us a little back towards normal before we have a vaccine approved. Of course, we’re waiting on a vaccine, and when that happens it’s gonna be a great day. I can’t wait.

As an artist how have you been coping with the pandemic? It’s pretty much stopped you being able to do what you love. Have you been able to channel the downtime into being creative?

I’ve been writing a lot of music and that’s been great, that’s been fun, and you’ve just got to keep a positive mindset as best you can. It’s a natural disaster in a way so that’s how you have to treat it I feel like. That’s where my mind’s been at. Obviously the band and crew, we want to get out. We’ve played a few socially distanced shows and just making the best of it, just like everybody else is.

You did your ‘Penned Up’ series with Lindsay Ell and Jameson Rodgers. That’s a good way to stay connected to fans and keep playing live music whilst not really being able to get out and about. How much did you enjoy doing that?

Oh man, I loved doing it. Those are two of my favorite artists so I got to hear them play and hear what they were working on and hear new songs that you can’t really hear anywhere else. I was as big of a fan as anybody else is. Then to get to share some of my music too, it was just a recipe for a lot of fun and I think we might try to do another one or something at some point. It’ll be a lot of fun. Lindsay just put a record out, which is great so when things calm down for her, I think we’ll try to get back at it.

It would be the perfect touring line-up to bring to the UK wouldn’t it?

Man, you said it. That’d be a ton of fun. I love those guys. I’d get to watch the show every night from the side of the stage so I’d love that for sure.

Has the pandemic given you any time to do things you haven’t had time to do for a while or just reflect on all your success?

I’ve played a lot of golf, which has been fun, and written a lot of songs, but mainly it’s just trying to stay in a positive mind and a positive headspace most of the time. Not getting to see people as much as I would like… family… to try to curb the spread and not get around vulnerable populations, like my grandparents, that part’s been pretty tough. Other than that, just like everybody else, we’re trying to figure out the best way we can to go forward.

What’s next for you? Are you working on another EP or an album?

We’ve been working on new music. I think we’ll have a new EP out this fall with some new songs on it. I’m really excited about that. That’s been the silver lining is getting to be creative so we got that coming out. We’ve got a few shows that are socially distanced coming up so we’re gonna try to play those as best we can. All those things are keeping us sane.

Advertisement. Scroll to continue reading.
In this article:Featured, Matt Stell