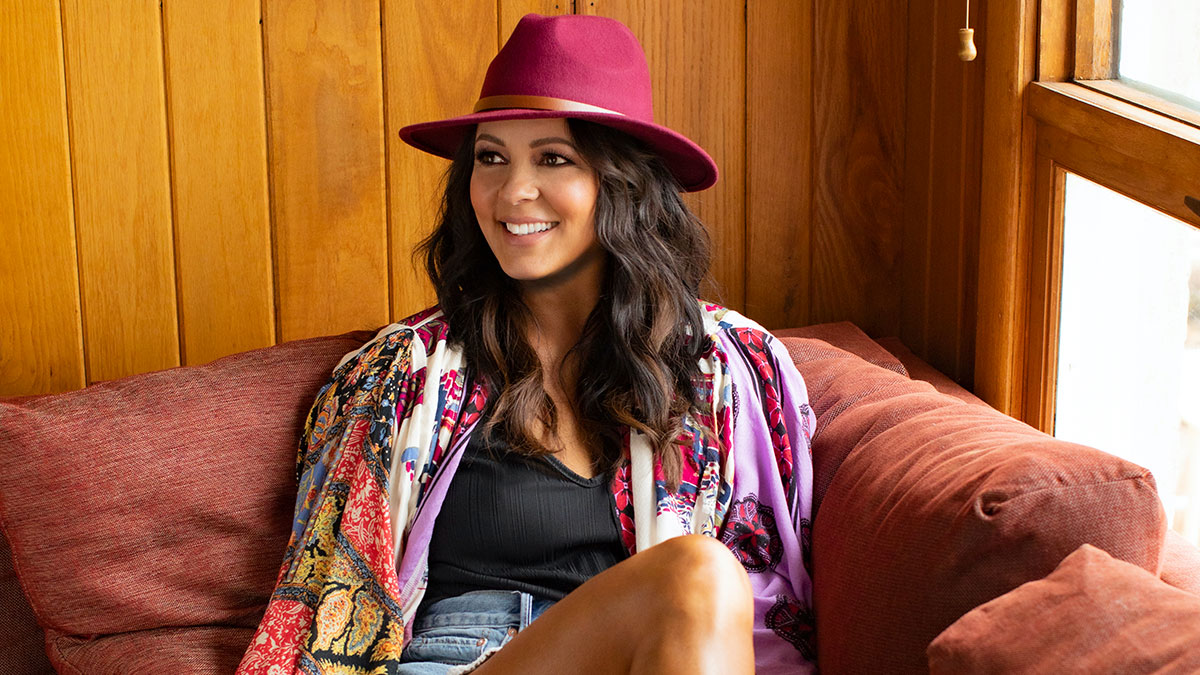 Sara Evans is one of Country music’s most successful artists and this week she’s releasing her first memoir ‘Born To Fly’.

Named after her iconic 2000 album of the same name, ‘Born To Fly’ is a collection of stories from Evans’ life alongside advice inspired by the life lessons she’s learned over the years. The book arrives just a few months after the release of her latest album ‘Copy That’, a collection of covers paying homage to the music that’s inspired her.

I caught up with Sara recently to chat about writing ‘Born To Fly’, discuss new album ‘Copy That’ and find out more about what it’s like to run a label…

Your book ‘Born To Fly’ is released this week. Why did you decide to write the book and tell these stories now?

It’s been almost four years in the making, which is crazy. When the publisher approached me about it, I didn’t really know exactly what kind of book I wanted to write because I thought I’m too young to write an autobiography, and I don’t want to tell my whole story yet. It took a little while to figure out what the book was going to be. Originally it was going to be like ‘I Don’t Know How She Does It?’ and me just talking about how I balance everything between being a mom, a wife and a step mom and then a country music star. When we started, I had a co-writer but that co-writer just didn’t work out so we moved to another co-writer, she didn’t work out. Mainly it was because they were having a hard time getting into my voice and so I just decided that I don’t need to be intimidated about doing this alone. I could do this alone.

The first half of the book is really me telling my story, my history about growing up on the farm and how I got into music, and getting hit by a car and falling in a well… all the crazy things that happened to me as a kid. The second part of the book is more funny advice and unsolicited advice from me about everything; parenting, fashion, diet, all of it. It turned out to be a really great book. I’m so proud of it and I’m so happy with how it turned out. Last week, I went in the studio and I recorded the audio for it, and that was really the final release. I’m finally done with it. I feel great about it. I think my family is going to love it. No one’s going to be too offended about anything I’ve said (laughs). It’s finally time to release it and I can’t wait. As much as I hate every single thing about the shutdown and Corona, I do think that this might be a blessing in disguise, the timing, because people are looking for new things to listen to and new things to read.

The ‘unsolicited advice’ part as you call it, I really enjoyed. As a child of divorce, I found your observations and advice very insightful about how to deal with the situation and how to blend families when you move on. Were you nervous about putting your thoughts and experiences out there?

Yeah. I feel like a lot of times during divorce, the adults become the children, meaning they act like children. If you didn’t go through divorce as a child, then you need to shut your mouth and you don’t know what these kids are going through if you’ve never experienced it. One of the things that I can’t stand is when parents talk about the other parent in front of the children. They talk bad about them and they might have their family over or friends over and they’re sitting within earshot of their kids talking bad about their kid’s other parent, and I just think that’s awful. It’s so destructive to children so that was one thing I really wanted to put in there. Like I say (in the book about becoming a step parent) don’t try to be their parent, they’ve already got a parent, and you just need to be there to only give, never take away. Just give, give love, and give advice if they want it. But so many parents are jealous of the relationship between the new spouse and their children. I really, really feel strongly about that and I think you can tell by the way I write about it in the book.

Something else you feel very strongly about, judging from the book, is that amount of time we all spend on our phones…

I’m with you but it’s hard isn’t it when you have so many things to juggle at once. How do you manage to find that balance?

It’s very hard. Taking a phone away from one of my kids as a punishment is actually more of a punishment to me because I need to be able to get ahold of them and reach them whenever I need to. I still am adamant if you’re in a group of people and someone’s talking, or everyone’s talking and everyone’s together, all I have to do is look at my 15-year-old and she knows to put the phone down. I absolutely do not tolerate that. You feel so stupid if you’re talking to someone and they’re texting or they’re looking at their phone, you’re just like, ‘Okay, well, I’m just gonna wait till you’re done because you’re not listening to me’. I’m really, really strict about that.

I literally just will not talk to someone if they’re looking at their phone (laughs).

In the book you talk about setting up your own label, Born To Fly Records. Given the career you’ve had, and continue to have, what’s it been like to have so much control over everything you do?

You know, there are positives and negatives to it. The positives are that I do get to absolutely make all the decisions myself. We don’t have to go through five layers of getting okayed by people at the label for an album cover. I’m not sure that if I had still been at RCA Records, would they have let me do the wig or both wigs for the ‘Copy That’ album cover because they might have said it’s not branding blah blah blah or it’s too too far out there. Fun things like that I get to do. My instincts about my own career and my own image they’re the best, better than anybody else’s. That’s been a real positive. The negative to it is that there’s a comfort with being on a big record label and having them take care of everything and having the big promotion stuff. Things are so different in the music world these days and especially in Country music because they don’t play women, and so I really wouldn’t even be going for Country radio right now because I don’t feel like American Country radio is even really my genre these days, because it’s just so much bro country.

I was disappointed for you when ‘Words’ wasn’t embraced the way it should have been by Country radio. It’s one of your best records and you can hear the creative freedom throughout the record…

I mean, it’s very tragic. It’s affected everything about my career. It’s affected my family. I grew up singing Country music and I’ve made my career, and I’ve contributed a lot to Country music, and for them to just all of a sudden say we don’t want to play women anymore… I know that everything’s really about money but it’s REALLY about money and not art these days so it saddens me. The blessing is that I do have an amazing fan base that buy the records even if they’re not hearing it on the radio, but it would be nice to be on commercial Country radio still.

You recently released your latest album ‘Copy That’, which is a collection of covers and I have to say the opening track ‘If I Can’t Have You’ makes me hope you’ll do a full-on disco album at some point. Why did you decide to do this album now?

‘Words’ was almost gonna be my specialty album, ans then I was like, ‘It just doesn’t feel like the right time’. We moved back to Nashville from Birmingham, Alabama last July and I needed to go in the studio and I needed to go in the studio soon. The process of having to write all the songs or look for songs, I knew would have taken too long and would have put me back a year and a half or so in terms of needing new music out there. I just thought, ‘why not do the covers record?’ We got this big group text going with my kids, my husband, my siblings, my manager, my producer, and we all just started sending songs to this group chat. I just started listening to ’70s on 7′ on ’80s on 8′ and every time I would think of a cool song, we’d put it on the list. Finally we dwindled it down to 13 songs, but there was really no agenda. I knew that I should definitely put a Patsy Cline song on because she was such an influence over my voice and even my personality, just watching the movie ‘Sweet Dreams’ when I was 14-years-old. I knew I should probably put a Hank Williams because, you know, it’s Hank Williams and the other songs it was just like ‘these are vibing with us right now’ but I would probably do a Volume Two covers record for sure because there are so many more than I want to record.

People often think recording a covers album is easy but it’s actually incredibly hard. You’ve managed to do it in a way where these songs sound authentically like they could have been your originals. How did you manage that?

Thank you! It is hard to do. I have to always trust my my own instincts and (know when) the song is not authentic with who you are. Nobody can feel that but me. I’m usually really, really, really opinionated and I co-produce every record that I’ve ever made. I just can’t record a song that I don’t feel.

The pandemic is causing chaos for us all right now but do you have plans to eventually get back over to the UK when things settle down?

The answer is yes. I need to crack the whip because I say to my managers and my booking agents every year like I want to go back to England, I want to go to Europe, and it just doesn’t seem to happen so I’m glad you reminded me. I need to put out another text and say, ‘I’m serious. I want to go back to the UK’. I’ve been there three times, and I love it. This time, I’m going to bring my kids with me and we’re absolutely dying to get back over there. As soon as corona’s over, I promise we’re going to make that happen because I do know I have amazing fans in the UK. I’ve always appreciated you guys so much, and you guys like the cool music!

Sara Evans’ memoir ‘Born To Fly’ is released on 8th September 2020 via Howard Books. Her latest album ‘Copy That’ is available now via Born To Fly Records.

In this article:Featured, Sara Evans