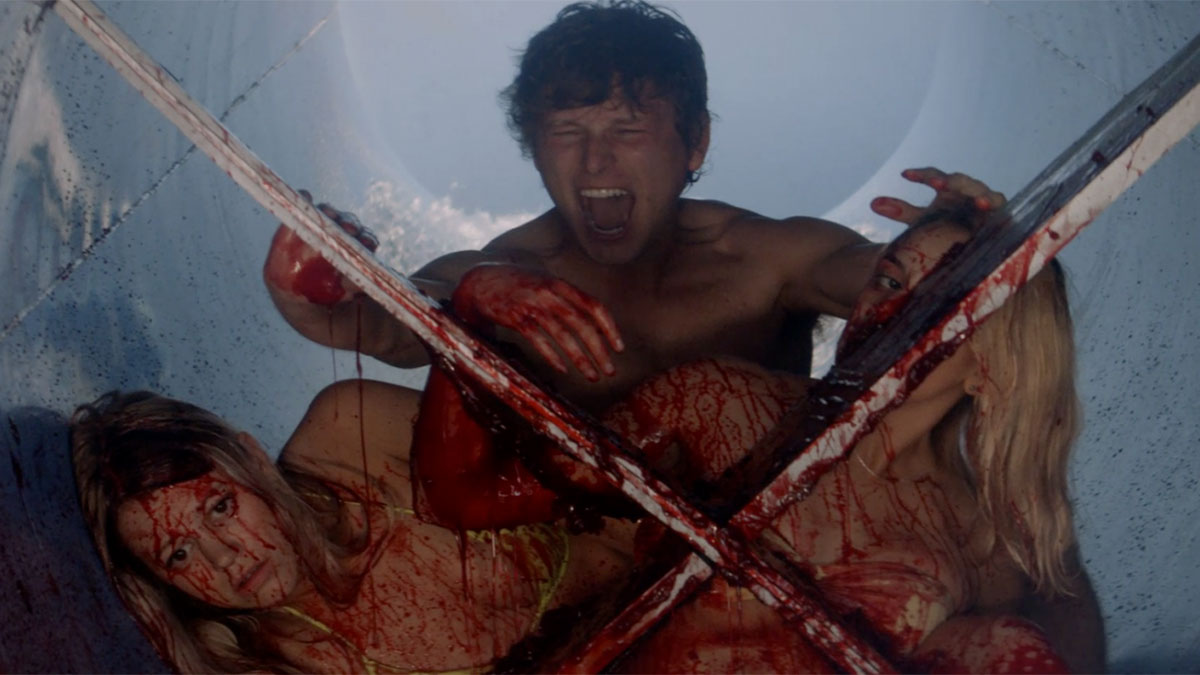 We’ve all heard that urban legend about someone attaching razorblades to the inside of water slides to deliberately hurt children. Despite it likely not being true, the story has spread across the world with generations of kids terrified to use water slides at parks, just in case someone has tampered with them. Aquaslash plays on that urban legend and I bought into the premise fully, expecting the film to be a short, silly, campy, fun slasher flick that offed teens in an entertaining and over-the-top way.

To be fair, when that set-piece finally arrives, there’s a pretty good payoff but that’s pretty much the only deaths in the film. With a title like Aquaslash, and with the way the film opens, you’d expect a series of brutal kills but that never comes to fruition. There’s some semblance of a plot added to try and explain what’s going on but it’s not particularly well fleshed-out. Too much time is also spent on a love triangle involving Josh (Nicolas Fontaine), Kimberley (Lanisa Dawn) and Tommy (Paul Zinno), which only really serves to lead to a gratuitous shower sex scene.

The acting across the board is pretty bad. It’s actually hard to tell if it’s the fault of the actors or the director, but no one really comes out of this film well. Nicolas Fontaine is just about passable once he eases into the role but his looks are more attention grabbing than his acting.

Aquaslash could have been a campy nod to 80s horror classics but instead it squanders a good premise. Building the whole film around one set-piece, especially when it’s spoiled in the trailer, is a let-down and while there is a little tension in places, Aquaslash never seizes the opportunity to be the camp classic it deserved to be. I really do feel like this could have been a brilliant film so hopefully someone will take the idea and try again in the future.