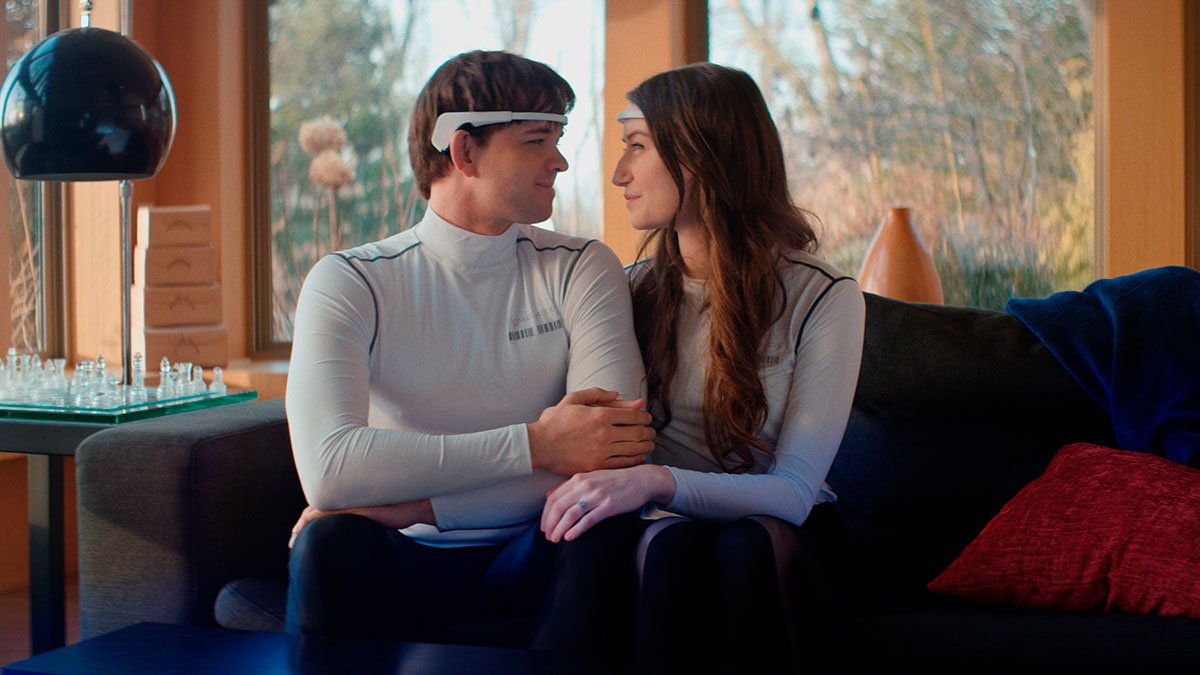 Arrow Video FrightFest is underway following the opening night last night and over the next four days, horror fans are going to be able to feast on some of the best new films in the genre.

Sci-fi horror ‘The Honeymoon Phase’ by film-maker Phillip G. Carroll Jr. will receive its UK premiere at 1pm tomorrow (Saturday 29th August), and it’s a story of couple who pretend they’ve married to take part in a financially lucrative experiment.

I spoke to Phillip to find out about the making of the film, discuss working with his wife Chloe, and to talk about the casting choices…

Hi Phillip. How are and how are you coping during the pandemic?

I’m doing well thanks, all things considered. Thankfully, my family and I are safe and healthy. I hope all of your readers are as well. I’ve tried to use the extra time I’ve had in quarantine to write my second feature, which I’m now starting to pitch. I also have my first feature about to come out – so it’s been a crazy year for sure!

Your film The Honeymoon Phase is screening at Arrow Video FrightFest this month. What’s it all about?

Down on their luck and needing some quick cash, struggling young lovers Tom and Eve lie about their relationship in order to enter The Millennium Project, an experiment for married couples run by the mysterious Director and Handler. With the promise of $50,000, Tom and Eve must survive 30-days isolated together in a futuristic smart home, while the researchers attempt to determine why couples fall out of love. Over the course of their stay, Eve begins a violent decent into madness as she questions if her lover really is the man she thinks he is.
A paranoid sci-fi thriller about the nature of trust in relationships, ‘The Honeymoon Phase’ is as much classic ‘Twilight Zone’ as contemporary ‘Black Mirror’, and an all-too-terrifying answer to the question, “How well can you ever really know someone?”

As well as directing the film, you wrote the screenplay too. Where did the idea come from?

My wife, Chloe Carroll, and I fell in love making short films together. When we decided it was time to create our first feature film, we wanted it to be a labor of love between the two of us. The marriage of my love of sci-fi, drama, and thrillers and my wife’s love of horror films lead to the birth of our little psychological thriller, ‘The Honeymoon Phase’. As a newlywed, I wanted to capture the ecstasy of being in the honeymoon phase while also exploring what can lead a relationship to fall apart. What slithered out of those ruminations was the idea of facade. Why do we pretend to be something we’re not to please another person? Why do we smile when we are sad? Or bite our tongue when we want to speak? For my wife and I, our greatest strength is our friendship is the foundation of honesty that we built it upon. ‘The Honeymoon Phase’ sows a lie into that fertile soil… a thought so horrifying that once it took root, the relationship would deteriorate – memory by memory. I hope as you watch ‘The Honeymoon Phase’ in the comfort of your home, the film plants that same seed of doubt in your mind… What if the person I love isn’t who they say they are?

Your wife Chloe plays one of the lead characters Eve. What was it like directing her and why did you cast her in the role?

Chloe was Eve before I even knew who Eve was! Directing her was an absolute blast. Our film goes to some truly dark places, so trusting each other was the single most important thing we had to do. Being married gave us a leg up in that trust building process. I’ve also made a bunch of short films with Chloe over the years and believed in her ability as an actress, just as much as she believed in me as a director.

The other lead is played by Jim Schubin. Why did you feel he was right for the part?

I actually first met Jim on a commercial I was directing back in 2016. He was a blast to work with. He has this innocence about him that I thought was important for Tom, while also commanding a presence. When it came time to cast the movie, Jim was on my list of actors to reach out to. Jim came to the audition with such a passion and thoughtfulness to the character. One moment in particular sold me though. After we ran the scene a few times, he asked for one more take. He went up to Chloe and asked if he could hold her hand. It created this instant connection between them. He performed the scene again and it was like a revelation. Jim was Tom.

What was the biggest challenge you faced when making this film?

During the climactic scene with Tom and Eve, where Eve is faced with the ultimate choice, there was a moment where nothing was working and I had to decide how to save the movie. The night before, I actually rewrote the scene after talking it through with Chloe, Jim, and some of the crew. I think we all knew something was missing, and thankfully, that missing ingredient was discovered in our group meeting. I spent all night rewriting the scene and got 2 hours of sleep before being whisked away into the car to be taken to set. Everything should have been perfect… but absolutely nothing was working. The Ronin wasn’t working at all and was even interrupting Jim and Chloe’s beautiful performances. We made it to lunch and I pulled Chloe aside to tell her, “I don’t think we have a movie here. We have to do something. This scene IS the movie and we don’t have a film without it.” We took a breather, and then I went to our incredible AD Ben Samuels. He carved out an hour for us go handheld to try to salvage the scene. In those 60 minutes, we all came together and reshot THE ENTIRE SCENE. That hour is what I’m the proudest of from the entire film production. Everyone came together to create what is now my favorite scene in the movie.

François Chau has a small role in the film. How did you get him involved?

From the moment I started writing the script, Francois was who I envisioned as The Director. I reached out to him on whim online, saying I was a HUGE fan of him from ‘Lost’ and pitched my script. I was shocked when he actually replied to my message! He said he’d love to read the script. He put us in touch with his agent, and the rest is history!

This is your feature film debut. What did you learn about yourself while making the film?

It sounds funny, but making a feature film I learned that I have what it takes to make a feature. I think before embarking on your first feature, you have this worry that you’re not good enough or not ready. And then you just do it. The most important thing I learned making this film is that nothing is stopping you from chasing your dreams besides yourself. You just have to believe in yourself and surround yourself with amazing people who will help you bring your vision to life.

Why should people see ‘The Honeymoon Phase’ at Arrow Video FrightFest?

People should see ‘The Honeymoon Phase’ because now more than ever, it is a commentary on the world we’re living in. When we set out to make the movie, we had no idea it would be releasing in a global pandemic. People who have seen the film have been applying new meaning to it, as at its core, the film is about a couple isolated in a house with only each other. Now add on a crazy science experiment with Francois Chau from ‘Lost’ and Tara Westwood from ‘The Grudge’ and you’ve got a pressure cooker of tension ready to explode. If you are, have been, or hope to be in a romantic relationship with someone – you can’t miss this film. You’ll never look at your partner the same way again. I sure don’t… just don’t tell Chloe.

I’ve used my time in quarantine to write my second feature, a coming of age movie I’ve been toying away with in the back of my head since 2014 – ‘Stuck in Our Heads’. When her anxiety personifies itself as an invisible friend, a high school senior teams up with a panic-ridden homeless man to find the solution to their disorders and create the ultimate senior project. You can actually catch a hint of the movie in ‘The Honeymoon Phase’. The book that Tom is writing my second feature film. I’m hoping to use ‘The Honeymoon Phase’ as a jumping off point to get this passion project off the ground.

If anyone wants to reach out to let me know what you think of ‘The Honeymoon Phase’, I’m on Twitter @PhilCarrollJr. I love chatting with other film lovers! If you like the film, please leave us a review and share it with your friends. Shares can mean the difference between am indie film dying or thriving. It would really mean the world to us! I hope you enjoy ‘The Honeymoon Phase’! Thank you for the opportunity to speak with you today!