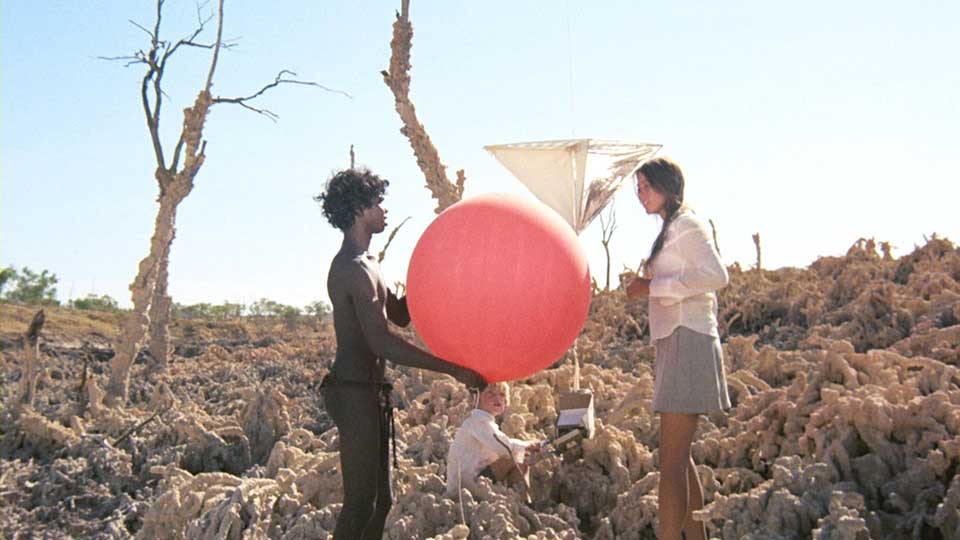 Nicolas Roeg’s Walkabout is, like all his films, intriguing and compelling, inviting multiple viewings before you even start to get beneath the skin of it and discover what it’s really about. The British director was behind the camera for the psychological drama Don’t Look Now, in which Julie Christie and Donald Sutherland mourned their young daughter in Venice. That too is a layered, complex, nuanced piece that divulges many more of its secrets to careful and attentive viewers.

Walkabout was released in 1971, a few years before Don’t Look Now, and it was the first feature film in which Roeg was the sole director. All of his trademarks are very much in evidence: the topography becomes a character in itself, whereas the humans are much more inscrutable. The narrative follows two children – a teenage girl (Jenny Agutter) and her young brother (Luc Roeg – the son of the director) as they become lost in the Australian outback. As city kids, they struggle to survive on their own, lacking the knowledge of what fruits are safe to eat, and how to find water beneath the scorched earth. Luckily, they encounter an Aboriginal boy (David Gulpilil) who is on his coming-of-age Walkabout, and he helps them to survive. Despite the cultural divide, they strike up a friendship, and enjoy an adventure as they cross the desert.

That synopsis makes the film sound charming, safe, perhaps even a utopian view of childhood. In reality, it’s nothing of the sort, and it always leaves a bitter taste in the mouth. There are many moments that are simply horrifying. Not least the reason the children become stranded in the outback in the first place. They are ostensibly taken on a picnic by their father, who appears to have inappropriate lascivious feelings about his daughter. He attempts to kill his children before settling for suicide, effectively killing his kids too by leaving them little chance of survival against the elements.

Then there’s the topography I mentioned earlier. There is a bleak beauty to the outback – the orangey land, cracked and dusty beneath an unforgiving sun. It looks magnificent on screen, the desert colours vivid, the endless stretches of perfectly flat land unimaginable to those of us used to living in towns and cities. But Roeg constantly reminds his audience of the savagery of nature. There are bones, bleached by the sun, dust blowing into long-empty eye sockets. Living creatures too, are magnificent in their variety and diversity, but they are dangerous and inimical to life. Even the ants quickly emerge to cover and devour the fruit the girl was eating only moments before.

There are few humans in the film outside the trio of children. But those who do appear are unsympathetic. There’s a business owner who mistreats the Aboriginals who work for him, and the father we’ve already met. Then there are the hunters who butcher cattle for sport. But what of the girl? It’s impossible to speak of Jenny Agutter’s character arc without giving away the ending, but, suffice it to say, the way in which she romanticises her adventure in the outback, especially given how it ends, is repellent in its dishonesty.

Where the performances are concerned, it’s little wonder that Jenny Agutter carved out a rich and successful career. She carries the bulk of the dialogue, though there are long tracts of the film without any at all. Although his character doesn’t speak English, David Gulpilil is impressive as the Aboriginal boy, conveying much of his intent through body language and laughter. Luc Roeg, although very young, is perfectly convincing as the boy.

Walkabout is uncomfortable viewing for many reasons, not least the difficulty in fathoming what, if any, lessons we should derive from it. Some scenes are harrowing for viewers who will struggle to see animals hunted and killed. But it is also a brilliantly realised film, and its classic status perhaps lies in its moral ambiguity. It is possible to be thoroughly absorbed by a story that retains the power to shock and appal on return viewings. If you like challenging films and ones that make you think about them for days afterwards, Walkabout may be your kind of movie. If you prefer a popcorn blockbuster, this isn’t one for you. The challenge is to watch it again a decade later and see if it’s the same film you remembered.

This limited edition Blu-ray box set is attractively packaged and comes with a whole host of special features, not least a copy of the original novel on which the film is based. The picture is presented in 4K and looks sharper and more vivid than ever before, really bringing to life the stunning Australian land. There is an audio commentary with Luc Roeg and David Thomson, as well as new interviews with Luc Roeg and Jenny Agutter. Danny Boyle fans will enjoy the celebrated director’s evaluation of the cinematic contributions of Nicolas Roeg, and the late director is also represented with some archive footage. This is the full-on collector’s edition.