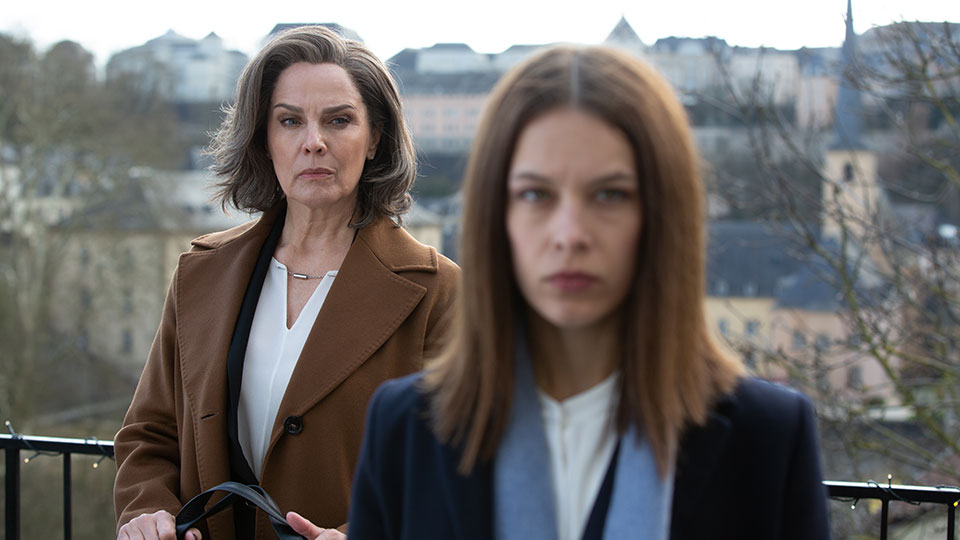 In case you missed Season 1, Bad Banks is exactly what it says on the tin. Naughty, badly-behaved financial establishments. It features some truly abhorrent, money-obsessed, soulless people in suits who strop about in their over-priced Armani trying to make millions of Euros using some highly questionable and immoral methods. If they smile, one assumes it’ll be because they’ve just imagined what it’d be like to run over a puppy.

If you want to avoid spoilers for Bad Banks, stop reading now.

The buildings they work in are architecturally extraordinary, but devoid of character and an ounce of charm or character. Set in Frankfurt, it’s all super-glossy and linear, with barely a natural curve in sight.

This is a hugely popular show in its native Germany. It has won an extraordinary 13 awards and was nominated for a further ten, including Best Actress (for its lead, Paula Beer) and Best Actor (for Barry Atsma – recently seen in the BBC drama, The Split, alongside Nicola Walker and Stephen Mangan). It’s clearly adored by the German public; and to an extent you can see why. Although the plot is often convoluted (unless you’re a Wall Street wizard), the acting is impressive. It’s fast-paced, and for anyone who gets off on the complex machinations of the financial markets, it must be nirvana.

In Season 2, Jana (played by Beer) has re-assembled her team of Thao (Mai Duong Kieu) and Adam (Albrecht Schuch) at Deutsch Global, and is about to start working in The Incubator (some fancy new office space). But Jana is being squeezed by Christelle Leblanc (Désirée Nosbusch), the Head of Investment at the bank, following on from her previous indiscretions in Season 1. Leblanc is under pressure herself from the board, who aren’t keen on financing the investment side of the business. Therefore, in order to seek favour in today’s greener world, they decide to team up with Green Wallet, an environmental and sustainable start-up company in Berlin. Green Wallet are everything Deutsch Global isn’t, as a visit to their shabby office shows: pets in the office, graffiti on the walls, and furniture that looks like modern art, Jana and her team are like fish out of water. Green Wallet are wary of the establishment and initially reject Jana’s offer; but then – using those unscrupulous tactics I mentioned earlier – Jana and co find a way in.

We occasionally get to see the human side of the team – Thao has issues with her controlling father; Adam is estranged from his wife and kids – but we don’t see enough of that, at least not in the opening episodes.

It’s hard to warm to a show when you struggle to feel any empathy with the characters; and that’s my issue here. Nothing wrong with show per se, but I found it hard to invest in – which given the subject matter, is more than a little ironic.

Walter Presents: Bad Banks season 2 will be available as a full box set available on All 4 from 7th August 2020.

In this article:Bad Banks, Walter Presents