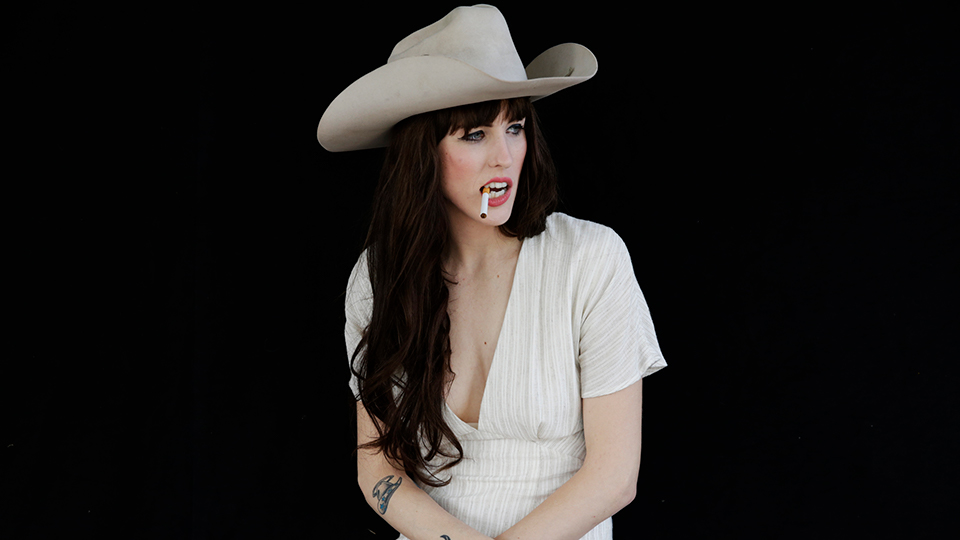 It’s fair to say Jaime Wyatt has a backstory that wouldn’t sound out of place in a classic country song.

After signing her first record deal as a teenager, by the age of 21 she’d battled drug addiction and served a year in LA county jail. The latter experience inspired her 2017 EP Felony Blues, which won critical acclaim and saw her hailed as the new ‘queen of outlaw country’. Now she’s back with the highly personal follow-up, Neon Cross, which is due for release in the UK on 21st August and deals with issues including the loss of loved ones, getting clean and coming out as a gay woman.

I recently spoke to Wyatt about the album, working with Shooter Jennings and Jessi Colter, how she approaches her songwriting, her experience of UK audiences, how she’s been keeping busy during lockdown and more.

Your new album Neon Cross comes out in the UK next month – can you tell us more about it?

Yeah. Neon Cross was made and recorded in Los Angeles and produced by Shooter Jennings, and comes out on New West Records. I’m really proud of it. There’s 11 songs on there and I’m immensely proud of this album.

The album’s been out in the US and on streaming platforms for a couple of months now. Has there been anything about the response to it so far that’s surprised you?

The response has been very good. Anything that surprised me? Well… we’ve gotten a lot of press that I wouldn’t think normally I’d get as a country artist. It’s been very well received by non-country fans.

Since your last record there’s been quite a lot that’s happened in your life and you’ve also talked about not having a filter for this album. Was that something you consciously wanted to do when you began making the record? Or did it evolve out of the process of putting it together?

Definitely part of the process. And that came about… I wasn’t planning on coming out of the closet, I wasn’t planning on that but in my personal process it became clear to me that that was important. And seeing just how liberating and how helpful it was to talk about being a recovering addict and a felon, and feeling that that was a positive thing. Because people had written me and said, ‘hey, I’m a felon too and I don’t live like that any more and thank you for talking about that, thank you for sharing’. And so in my own process of coming out to my family I saw that young people… what I’ve discovered in my process, as a young person I didn’t see a lot of people that looked like me, in country music or in pop music that I felt really mirrored who I was. And so it became clear to me that being out, proud and visible would help young people.

Do you think there’s been a shift in the country scene over the last few years, in terms of LGBTQ+ visibility, that had an impact on you in that regard?

Yeah, yeah. People like Brandi Carlile and Orville Peck, and Ty Herndon, those people have had an effect on me. They paved the way and they’re getting a lot of support and they showed me support.

You’ve mentioned working with Shooter Jennings as your producer on this album. What was it like working with him?

Oh, it was really fun. It was very inspiring. Yeah, Shooter is somewhat of a musicologist – just very studied. Very studied and knowledgeable about music. And he sort of has a sixth sense or rather intuition – he’s just very keen in interpreting and taking a song in the bare bones of songwriting from a demo and turning it into a performance.

You’ve also mentioned elsewhere about how Shooter helped you structure the album. Is that something you find challenging?

Oh yeah, absolutely. Song selection is huge. Song selection is something I can agonise over, and I write so much and have so many different ideas. To have someone support me and have someone of his knowledge, someone I respect so much, help me whittle down song selection and also even in the process tell me, ‘Hey, you should finish that song’ and I was like, ‘man, I don’t know’. Or even times I was like, ‘I don’t know if I can finish this song the way it should be done’, he was like, ‘You can do it. Keep it very simple’. And songs that I thought weren’t that good or that strong, he encouraged me to finish and they turned into some of my favourite songs on the album.

You know, like the original idea would come very easily usually. But I’d say the hardest song on the album for me to finish writing was Just A Woman, because it felt it was so important. And I feel every song is very important. However, Just A Woman was very important to me because it felt like it was somewhat of a feminist anthem or that it could be and that it would speak for other women. And it was important that it be emotive and emotional and organic, but yet make a statement.

I wanted to ask you about Just A Woman and working with Jessi Colter – how was that?

Well she recorded it remotely from her place. But I had the idea and I wasn’t sure. I mean she’s an older woman, she does not have to do anything, she’s successful, established, respected and she’s a legend. She doesn’t have to do anything. But Shooter was certain that she would do it. I wasn’t. I was like, ‘Man, do you think she’ll do it? I understand if she doesn’t’. But Shooter was like ‘I think she’ll do it. She loves you, she loves your work’. And she did, so she recorded it, and when she sent it over we got the file via email. The first time I played it I was with my mother in Los Angeles and we played it in the car and just cried. It was so moving and just really a proud moment for me. I was very honoured.

I also wanted to ask about the cover of Demon Tied To A Chair In My Mind. What was it that drew you to that song?

Well Shooter recommended that to me. I had never heard of it. I’d never heard of the writer, a guy named Dax Riggs, and he sent it to me and he literally was like, ‘You would do this song justice’. And he knew a lot about my life and my path and the struggles that I’d had, and was like, ‘This would just be perfect for you’. And sure enough upon hearing the song, hearing the lyrics I absolutely could relate and channel the emotion that I think you need to convey such a message.

You’ve been over to the UK a few times now, most recently last autumn, What is it that keeps you coming back here? And is there anything that you weren’t expecting about UK audiences before you came over here?

First of all, I love England. And I love it so much I’m in my kitcheIt’s been threen and I bought a map of England in Manchester when I was there last September, and I just finally framed it last weekend. So right now I’m staring at a picture of the British Isles. And I mean, I’m so fond of it. I cherish my time and my memories in England. The audience… I just really connect with English people. And what I remember from the audience is it’s damn near silent when I play. Aside from cheering and that. I just feel absolute respect from the audience there.

It’s been a few years now since your last record. Do you feel that your approach to your music and songwriting has evolved at all since then?

Well yes, I would hope that I’ve evolved [laughs] as a musician and as a performer, because it’s been three and a half years since I released Felony Blues and I spent all those years on the road, performing a lot and getting to perform a lot. And it was a lot of work – it’s hard to be out on the road – but I appreciate the hours that I’ve given on stage and the hours of just muscle memory and practice. Now as a writer, also on the road I had a lot of reflection time to study classic country music and study a lot of different music, just by listening. And then getting time to reflect on my own life and just journal and write poetry and write lyrics. So I really do think over that three and a half years I was able to create something more distinctive within my style and within the genre, but I really feel like I have had the opportunity to push the genre and to really deliver something that is unique, that’s not just the same thing over and over again.

How have you been keeping busy during lockdown? I imagine the album has taken up a lot of that time…

I’ve been gardening and doing a lot of home improvement stuff. I really enjoy gardening. I’m also practising roping and I do my fair share of meditation and reading, and I’m trying to get educated and stay educated on the current social movement that is occurring in America and across the globe. Just trying to be of service. And I’ve been involved in some protests. It’s a beautiful thing.

Are you thinking about the next record yet at all? Or is that way off in the distance right now?

It’s off in the distance at the current moment, but I’m always writing and I’m going to start on that process very soon. So I’m thinking about what the next record will be, absolutely.

And lastly… when this is all over and we can travel safely again, do you have any plans to come back to the UK?

Absolutely. I love England, and I cannot wait to go back. I talk about it all the time with my girlfriend.

Jaime Wyatt’s new album, Neon Cross, will be released in the UK on 21st August 2020 on New West Records.