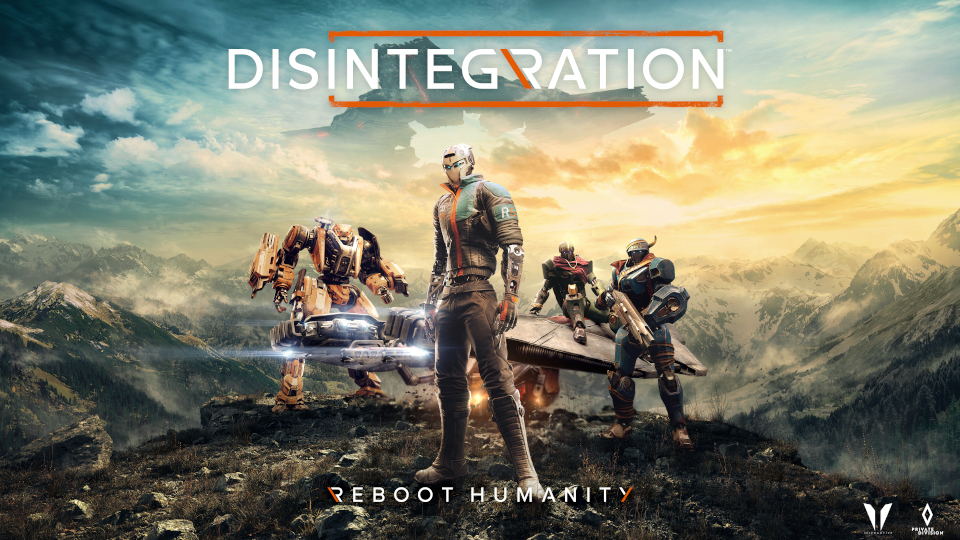 Disintegration is the ambitious debut title from V1 Interactive. The small indie studio was founded by Marcus Lehto, co-creator of Halo. I’ve been playing the PC version to see if it’s worth your time and money.

The game is a hybrid FPS/RTS set in a future where human brains can be integrated with robotic armatures. The technique was developed by scientists to reduce the demand for the planet’s resources after society collapsed due to climate change. A militant group known as Rayonne have become dominant and begun forcing humans to go through the process. A few non-integrated humans, known as Naturals, remain and are fighting back with the help of rebellious integrated known as Outlaws.

Watch the Disintegration launch trailer below:

Players take the role of protagonist Romer Shoal. Before integration, Romer was a celebrity who hosted a Gravcycle show. He starts the game imprisoned in a giant floating fortress known as the Iron Cloud. After escaping, Romer joins up with a crew of Outlaws as their Gravcycle pilot.

The 8-hour campaign is set across 12 missions where Romer and his crew go up against the Rayonne and their feared commander Black Shuck. Initially Romer’s crew consists of three fellow Outlaws – Agnes, Coqui and Doyle. They seek refuge with a Natural named Waggoner.

Visually the game looks similar to titles such as Halo, Anthem and Destiny. However, instead of being a clone of those titles, the gameplay is rather unique. This is because Romer spends the game piloting his Gravcycle which gives you the freedom to fly around the battlefield. While you’re floating about your crew follow you around on foot.

The Gravcycle is mostly armed with a single weapon and a healing gun. The types of gun available to you change throughout the game. You can expect to see all the usual weapons in your arsenal, including cannons and rocket launchers. The healing guns are pretty cool allowing you to fire a healing shot to a crew member of your choosing or sometimes a beacon to heal everyone in range.

Left to their own devices, the default behaviour of your crew is to follow as closely to you as they can. They have some autonomy though and will actively seek out enemies when in danger. While it’s tempting to go off on a solo rampage it’s really not the best tactic. To get the most from the game you need to issue commands to your crew.

It’s possible to tell them where to move and who to attack. This lets you send your crew into battle or ask them to retreat. You can have them flank the enemy, focus on a different target to Romer or all fight to take down the same one. You can also tell each crew member when to use their special attacks, these include concussion grenades, slowing fields and missile volleys. The control system takes a little getting used to but once mastered it works wonderfully. One downside is that you can only issue move and attack commands as a group. It would have been nice to issue independent orders but I can understand why this was probably left out to reduce complexity.

Most of the enemies are just cannon fodder but they do have some intelligence. When under attack, enemies will try to retreat, take cover and come back at you from a different angle. Other enemies are bullet sponges that take some firepower to take down. There are also flying drones and Gravcycles to contend with. The most dangerous enemy is the Thunderhead which are armed to the teeth. These four-legged walkers as best dealt with teamwork, a concussion grenade or a slow field followed by damage can bring them to their knees. This allows you an opening to damage their weakspots.

To succeed you really need to keep an eye on your crew. They will call out if they are taking too much heat but it’s your job to try and ensure they are healed. At times the only option is to retreat, regroup and heal up before heading back to battle. If a crew member dies, you have a short time to fly to their position so they can respawn. Failing to do so results in a failed mission.

Missions are bookended with some great cutscenes and I really liked the mix of characters. The animation and voice acting is excellent throughout. I especially liked the banter between the characters and Doyle was my favourite. During play the missions are mostly linear with predefined checkpoints. A waypoint system tries to point you in the right direction but at times it can be a little confusing working out where to go next resulting in some unnecessary backtracking. I liked that the missions have some variety and are more than just shooting gallerys. The game likes to mix things up including tracking down generators to open gates, directing your crew to hack signal jammers that disable your weapons and even an Overwatch style escort mission.

View some Disintegration screenshots in our gallery:

Killing enemies drops collectible salvage and there are also caches of salvage hidden around the environments. This is used at the end of each mission to level up your crew. Caches can also contain microchips to upgrade your skills. You have the option of choosing where to install these or there’s also a handy auto-upgrade option to let the game decide for you.

The skills you learn during the campaign are essential for tackling the multiplayer component. Disintegration features three multiplayer modes – Zone Control, Collector and Retrieval. These modes support up to 10 players and each player takes control of one of nine themed crews. I found the themes to be really well done with my favourites being The Sideshows (clowns), Lost Ronin (Samurai) and Warheadz (Mad Max).

The crews aren’t just cosmetic, each has their own speciality and play style. For example Lost Ronin are focused on offense and Warheadz are defence. Others focus on support, speed, close or long range and more. Each takes some practice and they also have their own loadouts to master.

The multiplayer modes feel familiar but the FPS/RTS gameplay adds a nice twist to proceedings. In Zone Control, players need to capture and hold specified zones using their ground units. Collector pits two teams against each other as they fight to collect “brain cans”. Finally Retrieval, is a play on attack and defence. Attackers need to pickup cores and deliver them to waiting rockets. While the defending teams need to stop them from succeeding. To really up the stakes the cores explode if not delivered quickly enough.

It feels like there are some balance issues with multiplayer but the biggest problem I’ve had is finding a game. The playerbase at the moment is low which makes it hard to find a game and that’s a real shame. This is likely putting off some potential buyers at the moment. I believe more content in the form of free and paid DLC is on the way which should hopefully help things.

Overall I had a great time with Disintegration and loved the gameplay mix of FPS and RTS. There’s a really good game here and the story provides an excellent foundation for the developers to build on in future, should they choose to do so. The small player base is an issue for multiplayer at the moment but hopefully players will give it a chance.

Disintegration was reviewed using a digital code provided by the publisher.