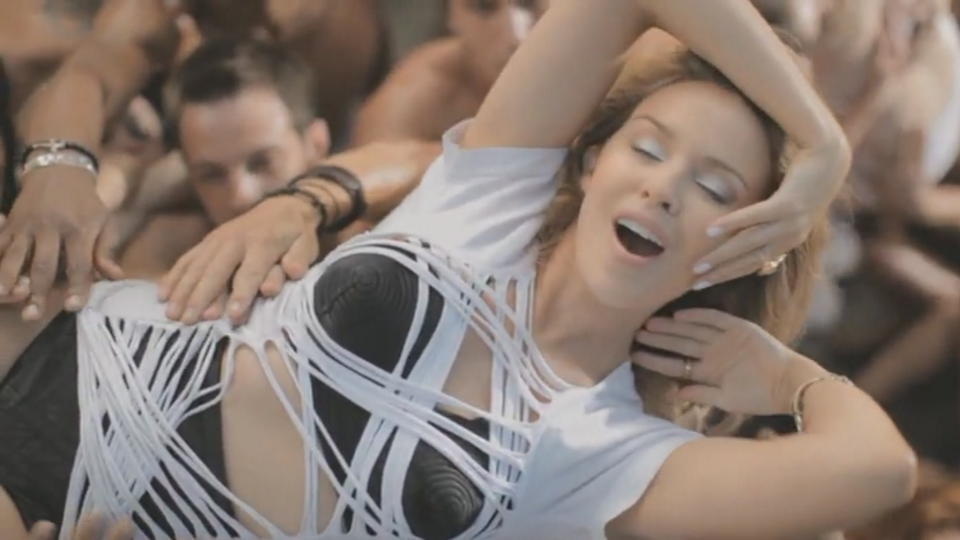 It’s been 10 years since Kylie released the euphoric Aphrodite, her 11th studio album and her fifth Official UK Chart Number 1. Get your togas on as we step back in time to an era that showered us with love and gave us arguably Kylie’s most ambitious tour to date.

Kylie’s last studio album, X, was released in 2007 and although it performed well  it didn’t reach the dizzy heights of Fever and met criticism for lacking a cohesive sound.  In 2009, writing started for Kylie’s follow up Aphrodite, but it wasn’t until a suggestion from Kylie’s pal Jake Shears that the sound of the album solidified.

Jake was recording with his bandmates, Scissor Sisters, for their album Night Work and were working with producer/writer Stuart Price. Stuart had very successfully produced Madonna’s 2005 opus Confessions on a Dancefloor as well as worked with The Killers, Seal, Keane and more. Jake convinced Kylie that she needed his magic for her album.

Stuart came on board as Executive Producer and Kylie had obviously been listening to her fans as she said about the album, “It’s probably the most cohesive album since the beginning of my career back at PWL days.” With a theme of universal love filling the album, it’s certainly a warm hug of an album that sees Kylie firmly in pop/dance territory.

Stuart explained, “You can hear someone smiling when they sing…every song we recorded, if we weren’t having a good time we pressed the stop button.” Watch the full interview with Stuart and Kylie below:

The first tease was to come in the form of the single All The Lovers, which was released in June 2010.  When I heard it was written by the same writers (Kish Mauve) who were responsible for 2 Hearts I was worried.  However, All The Lovers was an understated banger with a subtle, whispery Kylie, pulsing beat and electronic twiddles setting the scene as it pulls you in, before erupting into the uplifting chorus and sheer joy of the middle 8 full. The track peaked at Number 3 on the Official UK Charts, spent 10 weeks in the Top 40 and became a massive summer airplay hit.

With another Top 3 hit under her belt, Kylie and her then label Parlophone, showed they meant business by hosting journalists at a lavish album launch party at Pacha, Ibiza where Kylie also performed some of the new tracks. At a press conference on the island, Kylie said “I feel like the planets have aligned with this album…to end up here (Ibiza) and it all making sense is just genius.”

The UK fans agreed as we snapped it up and sent it straight to Number 1 on the Official UK Charts selling around 80,000 in it’s first week. This feat gave Kylie a Guinness World Record for the most consecutive decades with Top 5 albums in the UK having scored Number 1’s in the 80s with Kylie and Enjoy Yourself, in the 90s with her first Greatest Hits collection and the 00s with Fever.

Incidentally, All The Lovers went on to be Kylie’s second biggest selling single of the Millennium behind Can’t Get You Out Of My Head. It was perhaps the longevity of this song, particularly at radio, that left follow up Get Outta My Way struggling to get as much exposure. Due to album tracks being available to download individually, Get Outta My Way first charted in the Top 100 in the middle of September 2010 but it peaked in the UK at Number 12 early October when physical versions of the single were made available. It only spent two weeks in the Top 40 yet has since gone on to become one of her most streamed tracks of all-time as well as one of her most watched videos.

Get Outta My Way tells the tale of being out at a club and wanting to dance but your partner isn’t playing along and so you’re going to show them what they are missing by dancing with someone else. It’s a piano led dance track that caught the attention of DJ/Producer Alesso who sampled the melody for his own song Cool which peaked at Number 10 in 2015. It gave Kylie a Number 1 on the Billboard Club Dance chart and here she is in a rare US TV performance on Dancing with the Stars:

The third single took us back to where the album began.  In 2009, Kylie had sessions with singer/songwriter Nerina Pallot where it was suggested she do a take of a song Nerina had written called Better Than Today. It’s actually got quite a Scissor Sisters feel to the track as Kylie encourages positivity despite how bad a day you’ve had;  there’s always hope for a better tomorrow.

The track was released in November 2010 but only just crept into the UK Top 40, peaking for a week at 32.  The music industry was changing and the sound just didn’t capture fans imagination it seems.  Interestingly, the video was directed by Kylie herself and sees Pac Man style heads on her band and long pink wigs on the shoulders of her dancers.  Watch Kylie recreate the micography (if that’s even a word) on X Factor below:

Next on the Aphrodite journey was Kylie’s most ambitious tour – Aphrodite Le Folies – starting in early 2011 in Europe before heading to Japan, North and South America and landing in Australia in June 2011.  The theatrical experience played heavily on the Greek mythology themes that the album title suggests but with a Vegas showgirl spin including a dramatic fountain finish complete with acrobats and water jets.  To coincide with this, Kylie released a fourth single from the album in Australia.

Put Your Hands Up (If You Feel Love) was released on CD in Australia (and download in the UK) and more excitingly PWL’s Pete Hammond gave the song a reworking that brought back fond memories of the late 80s and Kylie’s SAW heyday.  Remind yourself of that below:

Listening to the rest of the album, there are so many single options to choose from and perhaps the record company could have moved quicker to follow up All The Lovers.  In my mind, Cupid Boy would’ve been a great second single as it had a harder edge than All The Lovers (and Get Outta My Way) and was produced by Swedish House Mafia who are credible dance producers and DJs who were enjoying Top 10 success themselves in 2010.  Knowing that All The Lovers would still be dominating radio airplay, Cupid Boy could’ve served the clubs and music TV channels to keep the album doing well before releasing the more mainstream Get Outta My Way in September.

Also Better Than Today, as much as I like the song, did sound a bit dated by the time it was released as a single, they could’ve gone for the anthemic album title track (imagine if that had been her first single post-cancer; what a statement), the unmistakable Kylie pop of Can’t Beat The Feeling or my personal favourite, the dark and slightly frantic, Closer.  Here’s Kylie casually flying on the back of a winged dancer high above the thousands of fans on her Aphrodite tour whilst singing Closer:

Elsewhere on the album, there’s a suprise mid-tempo ballad written by Keane’s front man Tim Rice-Oxley and Fraser T Smith (Adele/James Morrison) called Everything Is Beautiful.  Too Much is a 90s house inspired banger that Kylie wrote with Jake Shears and Calvin Harris.  Stuart and Kylie wrote a couple of tracks together; the gorgeous Looking For An Angel and the slightly out-of-place Illusion.

It’s worth mentioning the bonus tracks that featured on the album’s Japanese and Australian releases.  On the former was a Xenomania written track called Heartstrings which is a jaunty, electro-guitar track that feels like it could’ve been a Light Years b-side.  Then there’s Mighty Rivers which was a bonus on the Australian version also written and produced by Xenomania.  It has a similar vibe to Heartstrings but has more impact.  Have a listen to Mighty Rivers below:

On a final note, Taio Cruz wrote Higher for Kylie for Aphrodite but when it wasn’t to be used, Taio released it himself with Kylie as a featured artist (as well as Travie McCoy).  The track peaked at Number 8 on the UK charts in January 2011 and has become one of Kylie’s Top 10 biggest UK hits and one of her most streamed songs.