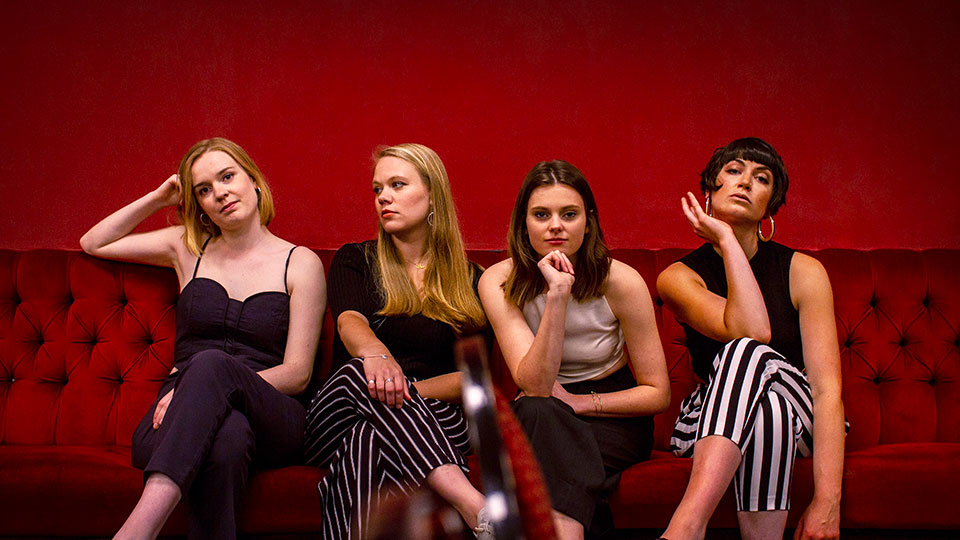 Since they formed in 2017, Yorkshire-based quartet The Magpies have been winning over UK audiences with their blend of folk, bluegrass and Americana.

Together they’ve performed up and down the country, including playing at the likes of Glastonbury and Cambridge Folk Festival. Last week, they also released their debut album Tidings to critical acclaim.

I recently caught up with Bella from the band to talk about the new record, how the group approaches songwriting, life on the road and how they’ve been keeping busy during lockdown.

I think we would describe it as transatlantic. It’s got Celtic influences and also Americana and bluegrass influences. And also to be fair we have some more Eastern sounds in there as well. So eclectic, maybe.

You’ve just released your debut album Tidings – can you tell us more about that?

Yeah, so Tidings is a collective noun for a group of magpies – that’s why we called it that. And the idea is that we wanted to make something that had a broad range of material on it and that showcased all of us in the band and the different influences that we’re interested in. So it just came together from working together for the past couple of years and took it from there. We ran a Kickstarter campaign to make that happen and had some funding from the Arts Council as well. So really pleased to have finally got it out there [laughs].

Why did you decide to do a Kickstarter campaign for the album?

Well, I suppose making an album is very expensive, and to be honest we couldn’t afford to do it any other way. It’s difficult when you’re right at the start because if you don’t have any albums to sell you don’t have money to make new albums. So it just seemed like a good idea, because we’d all been playing music in different outfits for a while before so we knew that there’d be some people who would be kind enough to support us and they did. It was a huge help.

The album is a very eclectic mix of traditional songs, covers and your own music. How did you choose what songs to include?

It was quite difficult to choose. I think we thought quite hard about how we wanted it to be balanced. We wanted to make sure that we had a selection of tunes written by us all so we each got to put something on there, and to split the singing and the leading of the tunes between everybody. And also we just wanted to reflect the different things we’re interested in. I think as a group we all tend to enjoy albums that are more mixed and varied, so that’s what we were aiming to produce – something along those lines.

One thing which struck me listening to the album was how well it flows. Was that seamless feel important to you when you were putting it together?

Well, I think there’s not a huge amount of extra additions from the studio. We were pretty true to how we play live. I guess we’ve formed a fairly distinctive way of making the songs and tried to find our own voice. So I guess they’ve all come off with a bit of the same Magpie style to it, if you like.

I can only speak for myself here, because we tend to write separately and then bring them together to arrange as a group. I wrote the song No More Tears on the album. That one was really easy to write. I actually wrote it when I was in the car driving up the motorway, and then I came back home and just wrote it down [laughs]. So some are harder than others. I personally find if it’s taking a while to write then it’s probably not worth trying to write it. But that’s just me, I know other people do things differently.

You’ve also recently released the video for Run River Run. What can you tell us about that?

Yeah, we went and recorded that with a guy who’s at Northern Cowboys in Manchester. We met them when we went to Folk Alliance in Montreal. They were out there because they play music too – Americana, country stuff that’s really good. But also they were making a sort of mini-documentary about the festival. We saw them there with their cameras and got to know them, and that’s how we ended up making that little video. We just wanted something simple.

You were out on tour earlier this year and have got some rescheduled shows coming up in the next few months. What’s a typical Magpies live show like?

Well we like to think it’s quite good fun [laughs]. We try to bring a lot of energy to it and a lot of humour. It’s similar to the album in that we try to keep it as varied as possible and just have a good time. But it was difficult with our tour – we actually got cancelled halfway through, bang in the middle of lockdown. Fingers crossed we’ll be able to get back out there soon.

What have you learned from touring and being on the road over the last couple of years?

That’s a good question. I’ve learnt lots of random things such as Premier Inns are better than Travelodges [laughs]. I think from being on tour the shows definitely develop as we go on and certainly the patter, the banter in between songs tends to mature as the tour goes on. I think it certainly tightens the screws on all the music. It’s good fun, but it’s exhausting. And I’ve learnt how to drive a minivan [laughs]. Useful life skills!

I also wanted to ask about the cover of Rock of Ages that’s on the album. What drew you to that song in particular?

Well, so this is one that Polly sings, and she’s grown up around bluegrass, Americana music. She’s always loved that type of music. We’re all big Gillian Welch fans. And I think we just liked the almost gospelly-type feel of the song. It sounds like it’s a traditional song but we were surprised that it’s actually Gillian Welch’s! But yeah, we also popped in a tune that Polly wrote just to try and make it a bit more mesmerising. I just think it’s an interesting song. We just like it.

Is that mixing in tunes you’ve written something you typically do?

Yeah. We’ve done that a bit. We’re a fan of weaving tunes into songs. Sometimes we’ve done a bit of writing our own lyrics over traditional tunes and stuff like that. But with the sort of traditional music there’s a lot of room for improvisation and trying to make it your own. And I think with a song that’s fairly iconic it’s important to try and get your own take on it if possible.

How have you been keeping busy during lockdown? I know you’ve been doing a few quarantine videos on YouTube…

Yeah, musically it’s difficult as a band to develop at the moment because we’re on lockdown in different places away from each other. But we’ve been sending each other different ideas that we’ve had for tunes and songs and things like that. We’ve got plans to reconnect and go camping as soon as that’s allowed so we can crack the instruments out at a social distance. But I think we’ve been doing a lot of stuff individually. I play as a solo artist so I’ve been doing livestreams on Facebook. And Holly plays with her brother and stuff like that. It’s been quite nice to diversify and think about other stuff. But I’m looking forward to playing with real people again [laughs].

Do you find that your solo work differs a lot compared to being part of the band?

Yeah, it is. It’s a totally different dynamic. Being in a band can bring so much, because you get someone’s idea that you would never have thought of yourself and can take something in a totally different direction to maybe what you’d originally thought it was gonna be like, and usually in a much better direction. But because I always write alone anyway, I suppose that side of it is similar. Certainly when I’m writing a song I tend to think whether it’s gonna be for a solo or whether or not it’s gonna be for the band, and try to keep that in mind when I write it.

What’s next for you guys? Are the album and the new tour dates the main focus at the moment?

Yeah. I think so. It’s very difficult to say what’s next right now, because everything’s so up in the air and we’re all quite worried about what’s gonna happen with the future of live venues. Certainly at the kind of level we play at it’s a bit worrying. Typically we’d be gearing up for festival season right now because we love playing at festivals, but there aren’t any [laughs]. So I guess we’re just gonna have to focus on writing more material and seeing where it’s gonna take us. I can’t 100 per cent answer that.

Are you thinking about the next album at all yet?

[laughs] It’s a ghost of an idea right now. I feel like making a record is tough, so it’ll be nice to rest from that before we start the next cycle of it all. See what we can do with this one first.

The Magpies’ album Tidings is out now on Magpies Music Ltd.