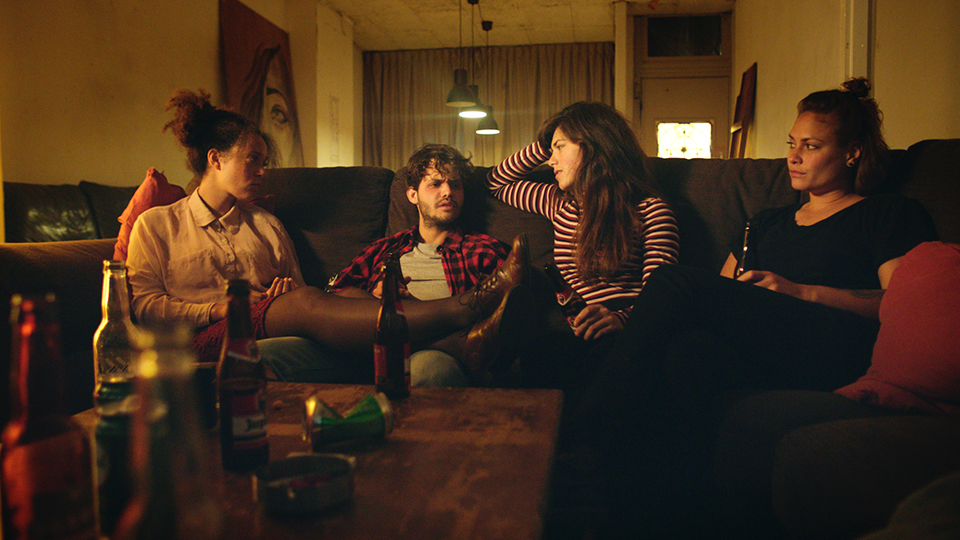 Walter Presents continues to push itself when it comes to drama. From its modest beginnings, it’s now the main UK source for all great drama from around the globe. And whilst it started out looking at the crime and thriller genre, today we get a far wider spectrum of drama to choose from. ANNE+ is the latest unique drama that WP has brought us, and I was privileged to speak via Zoom (after a few technical false-starts) with the three main driving forces behind ANNE+; Maud Wiemeijer (creator), Valerie Bisscheroux (director) and Hanna van Vliet (star), from their homes in Amersterdam.

ANNE+ started out as an idea they put out on YouTube, as Maud explains: “We released a short teaser on YouTube, and Millstreet Films spotted that. They approached us and helped us with the Crowdfunding campaign. And then BNN-VARA (a major Dutch broadcaster) stepped in thanks to Millstreet’s involvement.” Valerie continues: “Before we did the pilot, we started some funding on our own. We couldn’t get a broadcaster, so we decided to do it anyway and not wait.”

They were delighted that the show was coming to UK screens, although it has already had a far-reaching audience via film festivals, as Hanna (who plays Anne in the show) explains: “It was shown at Tribeca (Film Festival in 2019), also in Los Angeles, Montreal, Toronto, Sao Paolo and Bangkok.”

For Valerie Bisscheroux, ANNE+ marked her directorial debut: “I’m really pleased with the way it turned out – it came out like we imagined it to be.” But whilst they each have defined roles, Maud clarifies that they’re not limited by job titles: “We work – the three of us – on all aspects; on social media, fan sites and everything to do with the show.” And not just the three of them, says Hanna: “It’s the entire crew; because of the way it started off, everyone was working voluntarily. Now everyone has the urge to tell the story. And we’ve kept that into the second season too, even though it’s now in a more conventional format.”

Season One of ANNE+ comprised of six short (around 12 minutes) episodes, whereas Season Two is a more familiar 8 x 25 minutes format. Did that make things easier, because they had more time to expand the storylines; or were the shorter episodes less complicated? “A bit of both,” says Maud. “We wanted the extra time to go deeper into the characters; but in Season One, we could take our time. Season Two is now more professional and we have to deliver more quickly. That has been a challenge for us.”

Anne is a lesbian – the “+” in the title refers to women she enters into relationships with – but they were keen to ensure that this wasn’t a drama about her sexuality exclusively. Valerie: “We don’t avoid the fact that she’s a lesbian – it’s a big part of the story, and lesbian characters are still under-represented, so that’s important. But we wanted to make it as universal as possible and focus on the fact that Anne lives a normal life of a female in the Netherlands today.” Maud continues: “We deliberately chose not to make it about coming out or forbidden love; we just wanted to tell the story of a girl in Amsterdam and she happens to be gay. We wanted to normalise her and give it some positive representation.”

Season Two of ANNE+ welcomes celebrated Dominican actress, Laura Gómez (best known for her role in the Netflix series Orange Is The New Black), to the show. “We met her at Tribeca,” says Valerie.

“She was representing a rival show, and she came up to Maud and me to say how beautiful she thought our show was. We started talking and then she asked if she could be involved in the project. So we swapped details and made it work. We share the same values, so we had a strong connection from the beginning.”

The music in the show is an integral part of the production. Its composer and performer is Tess van der Velde. Valerie explains her role: “We’d worked together for a long time; she’s queer as well and totally into electronic music. I wanted to it to feature just female vocals, so all the voices you hear are women singing about women.”

In order to secure funding for ANNE+ initially, they created the ANNE+ Foundation: “We wanted to more to bring queer people together and help their representation (on media),” says Maud. “We’re actually looking at this now, working out what we want to do about creating a community and a safe space for queer people in the Netherlands and around the world.”

Going back to the show, will there be a Season Three, I ask: “We don’t know yet,” says Maud. “We’re talking to the broadcasters about Season Three, or maybe a feature film,” adds Valerie. “And we have international aspirations, too”, says Hanna. “We have big plans.”

Finally, I ask what the first thing will be they’ll do when the current Covid-19 Lockdown is lifted. Maud doesn’t hesitate: “It’s a Dutch word, which is “borrel” – it means having a drink with snacks somewhere around 5pm; it’s a weird Dutch concept. But we haven’t been able to do that because all the cafes are closed. But I think when they open, I will definitely be out all day, sitting on the stairs drinking beers and eating snacks!” Hanna: “I see my friends from a distance now, but I do miss being with them. And I miss the theatre as well.” And Valerie has a similar wish-list: “I’m looking forward to hugging my friends and family and seeing my grandmother – that’s what I miss.”

If you’re missing the theatre or cinema, I can heartily recommend staying in to watch ANNE+. It is for everyone – you don’t have to be a gay woman to appreciate the characterisation and script. It’s fun, up-lifting and beautifully written.