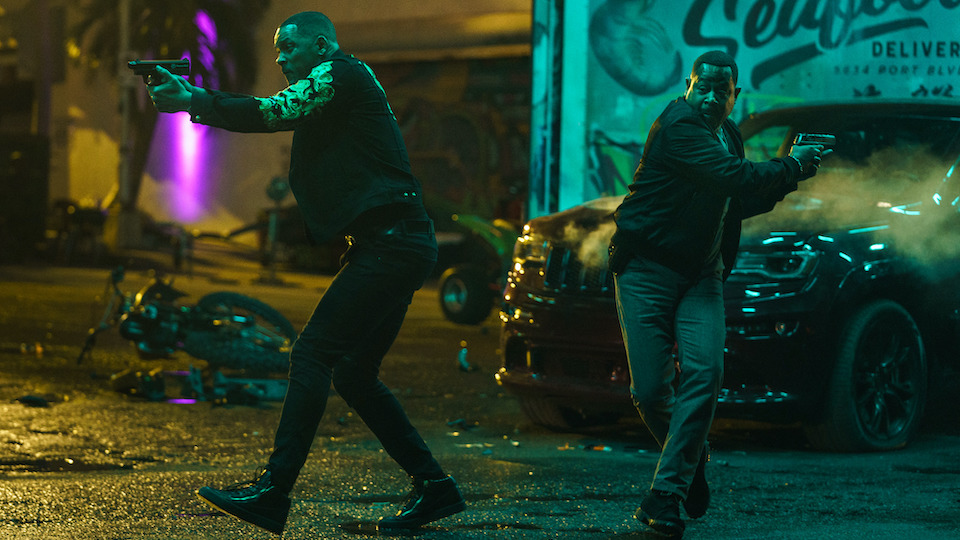 Will Smith and Martin Lawrence are back as Mike and Marcus, in what is a surprisingly welcome return for the two Bad Boy cops from Miami, seventeen years on from the preposterous action epic that was Bad Boys II. Having directed the first two instalments Michael Bay has now stepped down, to be replaced by Belgian co-directors Adil El Arbi and Bilall Fallah (aka Adil & Bilall), and the injection of fresh blood has worked wonders. Bad Boys for Life is a fun, fast-paced, and completely unexpected blast of 90s action movie mayhem.

The plot revolves around Isabel Aretas (Kate del Castillo) – the widow of a Mexican cartel boss – who escapes from prison and then sends her son Armando (Jacob Scipio) to Miami to retrieve their fortune and avenge the death of his father. This includes assassinating everyone involved in his arrest and prosecution, including police officer Mike Lowrey (Smith).

Meanwhile, Mike and Marcus (Lawrence) are drifting apart. Marcus is a grandfather now, and has one eye on retirement, whilst Mike still wants to be a bad boy for life. But what ya gonna do when a Mexican cartel assassin comes for you? Team up with Miami PDs new ultra-hi-tech weapons division of course. This new team includes Paola Núñez, Vanessa Hudgens, and Alexander Ludwig, and whilst they don’t get a huge amount of character development, they do give the film a boost of freshness, as well as giving the titular bad boys something of a fighting chance.

One of the immediate things that Bad Boys for Life has going for it, is that I don’t think there was any expectation for it to be good. The huge gap since the last film gives the surface impression that this film getting the green-light was a creatively bankrupt decision made by studio bean-counters. But even with expectations well and truly tempered this turned out to be a cracking action flick, that left me with a warm nostalgic glow.

First and foremost, Bad Boys for Life is fun, which is exactly what you want from these films. The action is massive and exciting, and unlike its predecessor you can actually tell what is going on for most of it. That’s not to say Adil & Bilall have completely forgotten the ultra-violent and deeply offensive ‘Bayhem’ roots of this saga. They make some clear stylistic nods to the original films, but crucially cut through the excess with knowing humour.

What really surprises about the film however is that it is unexpectedly thoughtful, and acknowledges that these two bad boys aren’t really boys anymore. Mike and Marcus are getting older, and should really be thinking about retiring rather than one last ride, and the film is not afraid to tackle this dramatically and comedically. The script gets a lot of mileage from examining what exactly Mike has to show for his years of living a flashy but ultimately hollow lifestyle. There’s also a terrific running gag about Marcus needing to wear glasses that pays off beautifully in the final act.

The emotional heft also comes from the fact that Smith and Lawrence have brought their A-game to this film. They could easily have phoned this in, but they are both on terrific form throughout. The banter is mostly sharp and funny, and the character history between them (and also Pantoliano’s Captain Howard) feels weighty.

But make no mistake, this is an absolute blast of a film, and I personally had a great time watching it. Unquestionably, Bad Boys for Life is ridiculous to the extreme, and I think it would be fair to say that the exact same plot transposed to a different film with different characters would have ended up as an instantly forgettable Netflix Original. But these bad boys (older and a little bit wiser) with their new directors (younger and a little bit cooler) have somehow conspired to make it work.

Bad Boys for Life is out on Digital Download from 11th May and on Blu-ray and DVD from 25th May.

In this article:Bad Boys for Life, Martin Lawrence, Will Smith