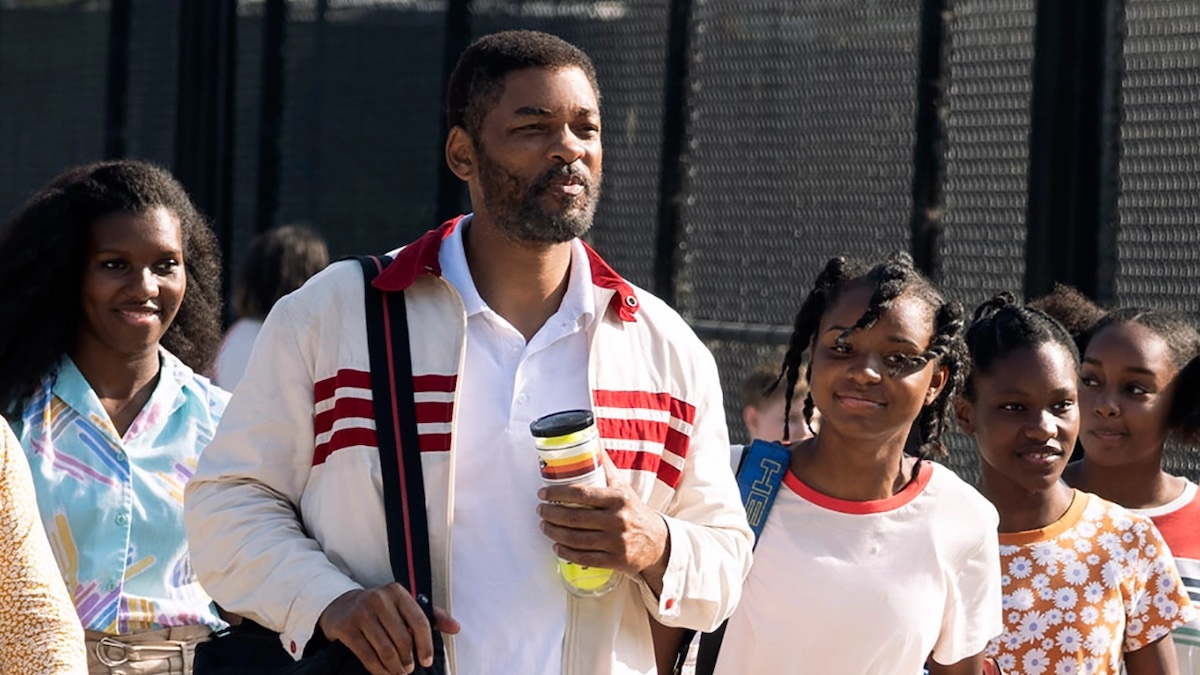 An overbearing and obsessive bully, or the greatest sporting coach of all time? A selfish self-promoter, or a highly motivated businessman doing whatever it takes to create a better life for his children? To its credit, ‘King Richard’ the biopic of Richard Williams (the father of tennis greats Venus and Serena Williams) isn’t afraid to ask these questions, and let the viewer make up their own mind.

Will Smith, shedding all of the charm and style we expect from a Will Smith performance, is tremendous as Richard. An awkward, and bull-headed man, with absolutely no qualms about getting in the face of the established order of things. He has literally written a plan to take his two wildly talented daughters to the top of a very white, very elitist sport, and he doesn’t care who he has to upset to make this plan a reality. Even if it’s Venus and Serena themselves.

‘King Richard’ begins on the streets of Compton, where Richard Williams is coaching his two young daughters to become the best tennis players in the world. From the outside, it looks as though he is pushing them hard, but he always keeps it fun, and drives home the importance of dreaming and believing. It’s important to both Richard and his wife Oracene (the brilliant Aunjanue Ellis) that their girls have a childhood. No matter what.

To that end, he knows he has to get them out of Compton. Protecting his girls from the mean streets of the ‘hood means he has to put himself in harms way on more than one occasion. A father taking a beating from local thugs in front of his children is a heartbreaking sight to see. His plan is to find the girls an elite level coach who will take them to the next level, but how will he get the highfalutin world of tennis to care about two little black girls from the ghetto? The answer…through sheer force of personality.

It’s a familiar story, but writer Zach Baylin, and director Reinaldo Marcus Green tell it extremely well, even if they do smooth over some of the rougher edges. Anyone with even a passing interest in tennis will know some of the details, and they will certainly know what it is all leading towards. But it doesn’t matter, because it’s so well told and so well performed, it completely pulls you in and leaves your heart well and truly warmed, without ever descending into cliché or unnecessary melodrama.

There are great performances from the whole cast, including Jon Bernthal and Tony Goldwyn as the tennis coaches who take a chance on Richard and his girls. Aunjanue Ellis has two of the film’s best scenes, a quiet confrontation with a neighbour, and a withering monologue to Richard that puts him well and truly in his place. Huge credit also has to go to Saniyya Sidney and Demi Singleton, who have the unenviable task of trying to mimic two of the greatest tennis players of all time. They do it superbly (with a little help from doubles) but also bring real depth and understanding of what it must have been like for Venus and Serena in those formative years.

But in the end, this is Will Smith’s movie. He’s in nearly every scene, and carries the film for its near two and a half-hour running time. Without his supreme star quality, I don’t they could have got away with the film being that long. It’s a towering, transformative performance, and he has got to the be the favourite come Oscar night.

The DVD release comes with a single bonus feature, which is a behind the scenes featurette. It’s the usual mix of onset footage and interviews with the key creatives and cast members.

In this article:Aunjanue Ellis, King Richard, Will Smith