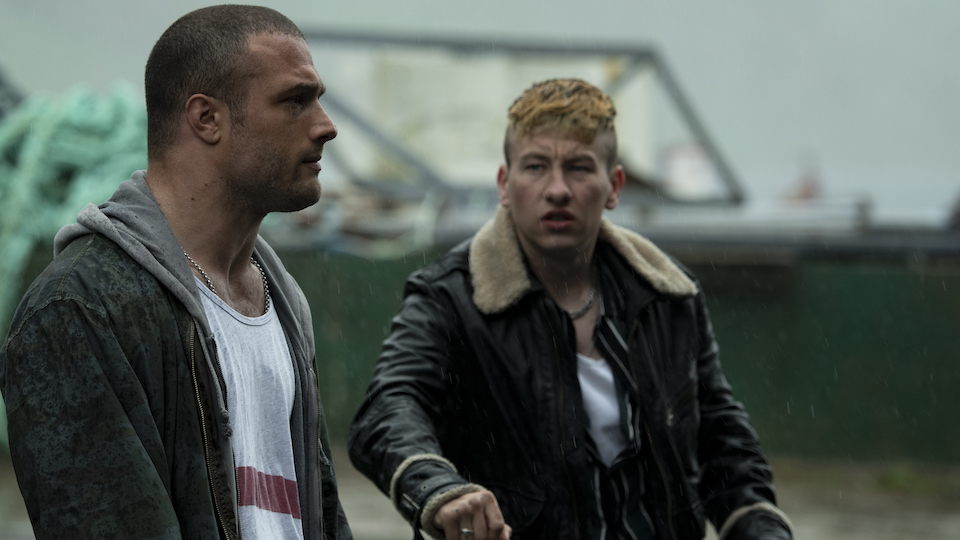 Calm With Horses is the terrific debut film from director Nick Rowland, written by Joseph Murtagh and adapted from the short story by Colin Barrett. Set on the west coast of Ireland this powerful and menacing thriller is a violent and darkly comic character study of a man trying to make sense of the world. This is a story we’ve seen many times before, but the elegant writing, thoughtful direction and colossal central performance from Cosmo Jarvis lend the film a real vibrancy and freshness.

Douglas “Arm” Armstrong (Cosmo Jarvis) is an ex amateur boxer turned enforcer for the Devers clan, a local crime family in rural Ireland. Quiet and unassuming, but for his hulking physical presence, he is basically their attack dog. They mistreat him, pump him full of drugs, and then unleash him. If Arm turns up at your door, you’re in trouble. When we first meet Arm, he is tasked by his best friend (but also his boss) Dympna (Barry Keoghan) to deliver a beating. The man in question knows what is coming, and there’s a dispassionate transactional quality to the almost unwatchable brutality he suffers.

Away from the Devers, Arm has a young son with his ex-girlfriend Ursula (Niamh Algar). He wants to be a good dad but doesn’t really know how. His son Jack has autism and attends therapy at a horse riding stable – where the film gets its title – but he needs to go to a school that can properly look after him, and that is going to cost money. Arm ultimately finds himself torn between his loyalty to the Devers and his desire to be a decent father. The psychological toll it takes on Arm costs him more than he can imagine.

The central performance from Cosmo Jarvis is astonishing, and reminiscent of Matthias Schoenaerts star-making turns in Bullhead and Rust and Bone. There is that same level of physicality driving the performance, where every emotion and nuance to the character comes through in the way he moves, the way he carries himself, rather than what he says.

Equally brilliant is Barry Keoghan, delivering another incredibly interesting character to his impressive filmography with Dympna. He’s a dead-eyed, violent bully, protected at all times by his family name on the one hand, and having Arm beside him on the other. But there’s also something utterly naïve and harmless about him, and Keoghan captures this perfectly in his performance. He’s just a daft young lad caught up in a life he can’t escape.

There’s a unique visual feel to the film, with the harsh, wind-thrashed landscapes contrasting with the dingy pubs and claustrophobic houses. Combined with the pulsating synth-driven score, and the terrific performances, Calm With Horses is a fantastic character-driven thriller, that builds to a nerve-shredding final act.