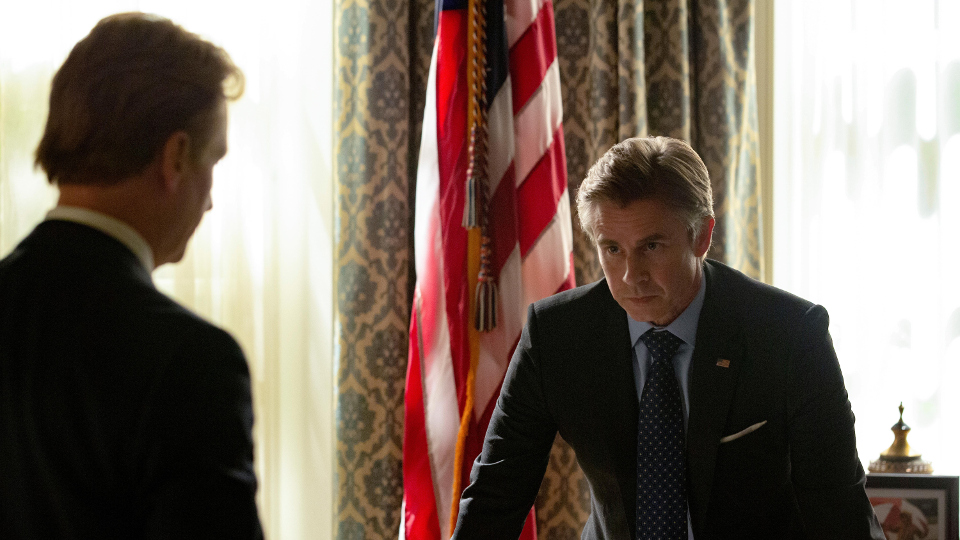 The eighth episode of Homeland season 8, saw Carrie (Claire Danes) frustrated as she waited for help to be arranged for Max (Maury Sterling).

The episode opened up with Haqqani (Numan Acar) praying in his cell before his death by firing squad. President Hayes (Sam Trammell) tried to appeal to G’ulom (Mohammad Bakri) to hold off on the execution while they resolved the Max situation. He said that if Haqqani was executed then Jalal (Elham Ehsas) would execute Max. It worked and G’ulom gave them 24 hours.

Carrie was still with Yevgeny (Ronin Costa) and trying to keep an eye on Max. Saul (Mandy Patinkin) called to updated her and said they were working on it. He then went into a video meeting with Hayes. The plan was to send in a team to extract Max but the odds weren’t good and Hayes stormed out. He was followed by John Zabel (Hugh Dancy) who tried to talk him into not worrying about Max. Meanwhile, Wellington (Linus Roache) had a poke around in Zabel’s office and found a copy of a speech he’d prepared for Hayes which he took with him.

Saul went to see Haqqani in his cell to explain why his execution had been stopped. He explained Jalal had taken Max hostage. Their meeting was soon interrupted as Haqqani was dragged from his cell and back outside to the firing squad. Saul appealed to G’ulom but he wasn’t bothered to listen to his warnings. The firing squad fired four bullets into his chest and he slumped to the ground as Saul looked on in horror. Somehow, Haqqani mustered the strength to bring himself back to his feet as chants came from his followers. The firing squad fired again and this time he was dead.

Carrie spotted movement at the compound where Max was being held. Yevgeny showed her a news alert showing that Haqqani had been executed. It looked like Max was to be loaded into a car but Jalal came outside and filled him with bullets before he and his men drove off. Carrie raced across the fields to the compound but her Max was already dead. She held her friend in her arms and sobbed.

Saul was watching Haqqani’s body being wrapped up when Carrie called. She ripped into him furiously at his failure to save Max. She asked that he send someone to collect Max and he said he would. Saul told her that she had to come back and she said he knew where he could find her – with Max’s body. After the call Carrie insisted on helping Yevgeny carry Max’s body inside.

Jalal went to a meeting of the Taliban where his father’s second in command was giving a speech. He wanted them to continue to pursue peace as that’s what Haqqani wanted. Jalal had other ideas and said he was like his father used to be when he was young. He wanted them to rise up again and produced an RPG saying that he used it to shoot down the helicopters which resulted in the deaths of the two presidents.

Wellington confronted Zabel about the speech and the pair argued. They went to Hayes and Wellington seemed to get him back on side. Hayes told them to work it out together. Zabel wasn’t happy about it as it put Wellington back in control. Zabel called a female friend and asked for something he could use against Wellington and Saul. She came back to him with a recording of Jalal’s speech where he claimed the downing of the helicopters. Zabel went straight to Hayes, behind Wellington’s back, with the recording. He used it to get Hayes to change his televised speech into a threat against Pakistan. He demanded that they give up Jalal or the US would come and get him themselves.

Saul headed out by helicopter with the team to bring Carrie in and Max’s body home. Carrie thanked Yevgeny for his help and told him that Saul would look out for her. After Saul arrived the team with him acted on other orders. They demanded to search her and had restraints ready. Carrie flipped and thought Saul had been telling her lies. She pulled a gun and backed away, in the distance Yevgeny fired into the air. The team pulled their guns but Saul stood in their way and ordered them back to the helicopter.

Carrie walked back to Yevgeny and they left together by car. The helicopter followed them for a short while. Inside the car, Carrie decided to tell Yevgeny about the missing black box and that she had an idea where it was. What if it was the Russians who shot down the helicopters?

Can’t wait for the next episode? Read our Homeland season 8 episode 9 preview.