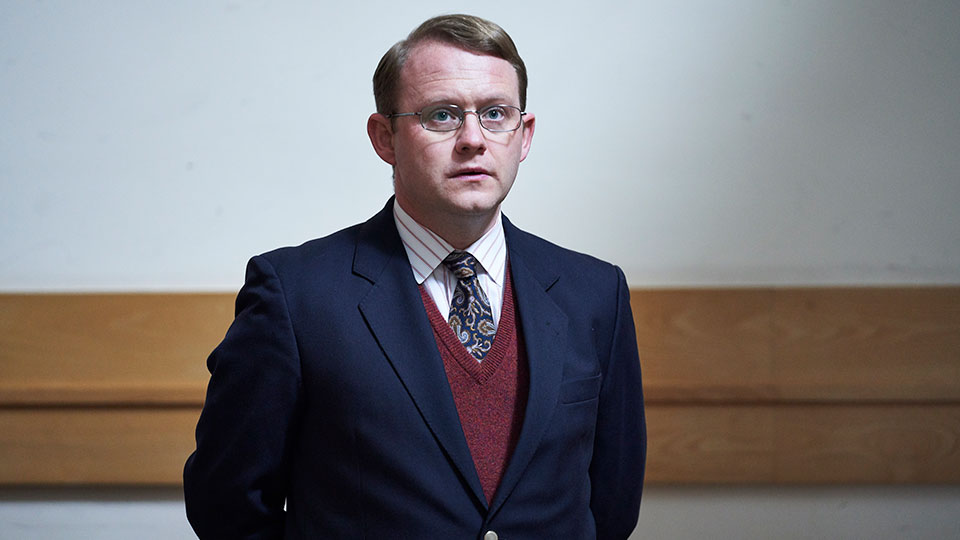 With an impressive CV that includes roles on the big screen in Les Misérables, Beauty and the Beast and 1917, and small screen roles in A Discovery of Witches and The Alienist, Michael is an in-demand actor. For his latest role he plays Tecwen Whittock in ITV’s Who Wants to Be A Millionaire? drama Quiz that explores the cheating scandal that surrounded contestants Charles and Diana Ingram in the late 90s.

I caught up with Michael to talk about Quiz, discuss how he prepared for the role and to find out what it was like to work with revered British director Stephen Frears.

Quiz is going to be airing over three consecutive nights, starting on Easter Monday. What can people expect?

I think they can expect the best of British television. It’s been made by Leftbank, who made The Crown amongst other things. It’s been directed by Stephen Frears, who’s a British institution in TV and film. It’s written by James Graham, who’s probably one of our best playwrights and now screenwriters at the moment, who’s still only in his 30s. He is intelligent and brilliant at what he does. There’s a brilliant ensemble cast, including Matthew Macfadyen, who was recently in Succession, Sian Clifford, who’s been brilliant in Fleabag, Michael Sheen of course, who’s playing Chris Tarrant, and other people like Mark Bonnar and Aisling Bea. It’s a really, really cool show about a scandal that happened 20 years ago, but also a real investigation into quizzing and whether they (Charles and Diana Ingram) did it or not. It explores the way people treat people and scrutinise people who have been caught for doing something that some would argue is not necessarily wrong. It really makes you think as well as being brilliant TV, and a whodunnnit.

You’re playing Tecwen Whittock. Who is he and where does his fit into this scandal?

Tecwen Whittock was a Welshman who was a quizzer himself. There was this community of people who were in contact with each other and they would go on quiz shows around the world, not just in this country. Some would say (they would) try to beat the system or that it was part of their hobby to go on these shows and be good at getting answers right and winning the prizes. Tecwen was in touch apparently with Diana Ingram, who is the wife in the threesome of Charles, Diana and Tecwen, through the quizzing community. Tecwen, by coincidence, on day two of Charles Ingram’s appearance on Who Wants To Be A Millionaire? was there in the fastest buzzer seat and allegedly was coughing to assist them in winning the jackpot prize. He was also convicted with the two of them and they were all give suspended sentences with a fine and proven guilty that they tried to steal a million pounds from Who Wants to Be a Millionaire?

There’s so much more to this scandal than I think a lot of people realised. What drew you to the part?

I saw the play. The screenplay is based on James Graham’s original play that he wrote back in 2018. It started at Chichester Festival and then it transferred to the West End. One of my best friends was playing Charles Ingram in that place. I went to see it and loved it, and then just forgot about it really. Then the meeting came in to go meet Stephen Frears. When you get a meeting with Stephen Frears and you hear that people like Michael Sheen is attached, and Matthew Macfadyen, you jump at the chance and you go to the meeting. Luckily for me, it went well and I got the job.

You mentioned that Stephen Frears directed the series. What was he like to work with?

Apart from being brilliant, he’s a character. He’s knows what he wants and he knows when something’s not right, and he tells you. He’s very driven and just gets things done. He moves very quickly and he pulls together the best people. He’s very, very funny and quick-witted. It was incredible to watch him working really, because sometimes he doesn’t say much at all and he lets everybody get on with it, because he’s happy with what everybody’s doing, and then he’ll just say something that’s just some of the most brilliant direction you’ve ever had. He’s just a brilliant, brilliant man to be around and inspiring, really, as an actor to work with.

When it came to preparing for this role did you actually go back and revisit any of the footage of the scandal from the original episodes?

Yes, I did. I looked at the episode with Charles and Diana Ingram. I watched the episode with Tecwen when he was successful and got on to the show after the Ingram’s, which some might say is a coincidence or it was all part of the plan. I watched it and I studied his characteristics and delved deep. It’s such a luxury for an actor to be able to have the actual footage there to to look at of what actually happened. It was fascinating.

The series actually features footage from the original episodes doesn’t it? The production and set design is so impressive. What can you tell me about that aspect?

They rebuilt the set down at Wimbledon Studios, which is where they used to film The Bill. I think the latest Who Wants To Be A Millionaire set is up-to-date and it’s slightly different to the original one. They rebuilt the original one but they may have changed a couple of things in terms of size because they were filming on it so that it had to be modified for filming purposes. Other than that it was pretty much bang on. They’ve used some footage of the actual contestants on the show so it looks like the person is an actor but they’re not, it’s the real person – the way it’s been edited – talking to Michael Sheen. There’s one particular moment in the first episode when a lady is on and she nearly wins quite a big amount of money. She’s genuinely gutted and I think it really highlights, for the production team in the show, how exciting Who Wants to Be a Millionaire? was going to become for them because the formula they had for this quiz show was working. It’s a mixture of us lot being the actors and some of the real footage as well so it really feels like at times you’re watching actual episodes of Who Wants To Be A Millionaire?

Was it surreal being around Michael Sheen when he was in character as Chris Tarrant?

Yeah. Michael’s actually my cousin-in-law so I know Michael as an extended member of my family. My wife is his first cousin so I know Michael personally, I suppose better than most actors. He’s not like a best friend of mine but I see him at family dos and things like that so I’m quite used to chatting to Michael when he’s not in character. It was fascinating and brilliant to work with him for me because I’ve never worked with him. To be on set with him and see him having just a wig on and some fake tan, and just talking like Michael and having a chat with him in the lunch queue, or on set having a cup of tea, and then he just switches it on and the lines become blurred between Chris Tarrant and Michael Sheen. You start to forget what Chris Tarrant looks like, which I think the audience who are watching Quiz will also feel when they watch it. At first you look at him and go, ‘well it looks nothing like him’ and then you start to think, ‘hang on, he does look a bit like him’ and then it doesn’t really matter because he’s just so good at being a character without it being a caricature or an impression. It was fascinating to watch.

I’ve got quite a few things coming out. I’m in Four Lives for the BBC, which has got Sheridan Smith and Stephen Merchant in it. It has been postponed for the time being because it’s an ongoing actual case so that’s coming out at some point. I’m also in Honour for ITV, which has got Keeley Hawes in it and is about the Banaz Mahmod honour killing that happened in South London about 10 years ago. I play one of the main parts. I’ve also got a nice role in Edgar Wright’s new film Last Night in Soho, which is coming out at some point in the future. I recently was filming the second season of A Discovery of Witches, which is on Sky, I play Rudolph the Second in one of the episodes who’s quite a prolific character and he was a real person. In the in the novels he’s quite a prolific character within that series of books. I’m also in a film called An Unquiet Life, that might be a working title at the moment, which is a film about Roald Dahl and his wife, which stars Hugh Bonneville and Keeley Hawes. I’ve been very busy this year, which has been great. The lockdown means that I’m just sitting around waiting for things to come out.

In this article:ITV, Michael Jibson, Quiz, Who Wants To Be A Millionaire?