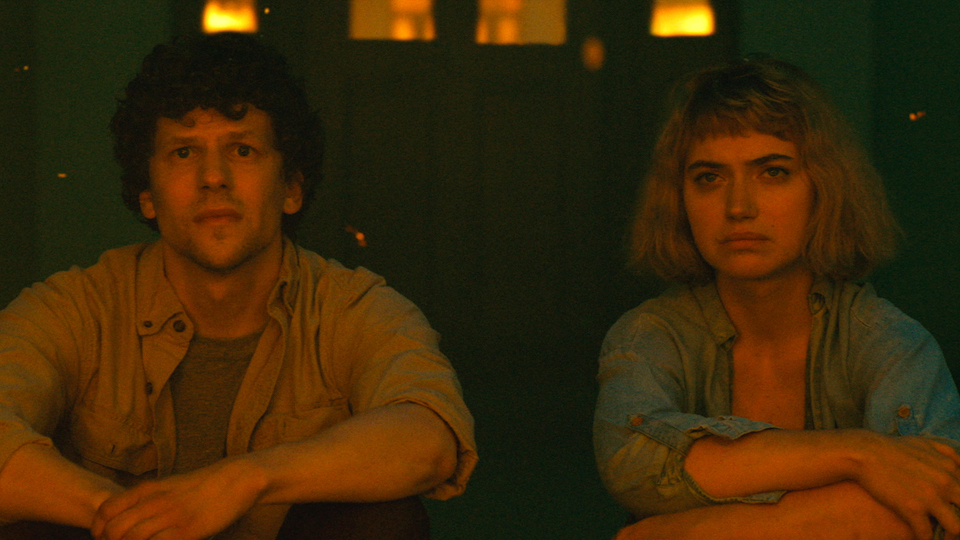 Whenever I hear the term “Kafkaesque” I’m always reminded of the brilliant Noah Baumbach film The Squid and the Whale, which also starred Jesse Eisenberg. Ever since that film, which brilliantly skewers pretentious literary twaddle, it’s been a phrase I’ve tried to avoid. Lorcan Finnegan’s new film Vivarium however – a strange and surreal suburban nightmare – is nothing if not Kafkaesque.

Jesse Eisenberg and Imogen Poots are Tom and Gemma, a young and unmarried couple looking to buy their first home, lest they get “left behind”…god forbid. This leads them to an estate agent selling houses in the paradise idyll of Yonder. The agent in the office is the extremely weird Martin (Jonathan Aris). His odd behaviour should set alarms bells ringing at this point, but they agree to let Martin take them to Yonder.

The housing development is a vast maze-like estate of identical pale green houses. A suburban hellscape of perfectly manicured niceness, without another car or person in sight. Martin shows Tom and Gemma around the house, which is lovely but like everything else, a little off-kilter, and they quite rightly decide it’s not for them and want to leave. They go to tell Martin but he has disappeared. They ignore this and decide to leave anyway. Unfortunately they can’t escape Yonder. No matter what direction they drive in, they end up back in front of the house Martin showed them. Their phones have no signal here. They run out of petrol. They are trapped.

With no other choice, they stay in the house overnight. Food mysteriously arrives in boxes outside the house. It is all vacuum packed and devoid of any taste. Then another box arrives, only this one contains a baby, and a single ominous message: raise the child and be released.

Drawing on classic suburban horror such as The Stepford Wives and The Midwich Cuckoos, with even a touch of John Carpenter’s often overlooked In the Mouth of Madness, Vivarium manages to be both darkly comedic and deeply disturbing. The child grows quickly, so after what seems like a few months in the life of Tom and Gemma, he (it) is a ten-year-old boy. The creepiness of this boy cannot possibly be undersold. He screams like some hideous alien being until he is fed or tucked in, and speaks in a grotesque mimicry of his “parents”. Forget Kafkaesque, things have taken a turn for the Lynchian.

I had a lot of fun with this film, but I’d be interested to see how people react to it. I was lucky enough to see Vivarium a few weeks ago, but I write this now in the early days of the COVID-19 lockdown that is gripping most of the world. How a film about people being stuck at home for months on end, in the suburbs, with their kids, will go down at this time is anyone’s guess. It may well strike a chord with viewers looking for something even more bleak than our current reality.

Vivarium is a witty and stylishly made film. The central metaphor is in no way subtle, and the films views on parenthood and settling down in the humdrum hell of the suburbs are decidedly depressing. As a piece of high-concept satirical sci-fi however, it is very entertaining, occasionally horrifying, and that’s before it descends into a dizzying psychotropic nightmare.

Vivarium will be released in the UK and Ireland on digital from March 27th courtesy of Vertigo Releasing.