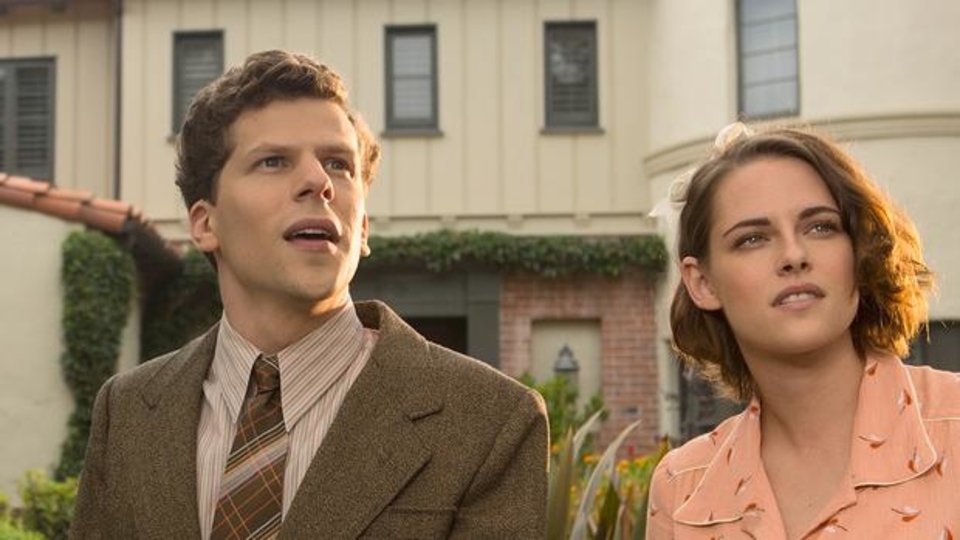 It seems that every recent, new Woody Allen release is hailed as a return to form for the writer/director. Truth be told, his films have always impressed. Granted, the heyday of Manhattan and Annie Hall have long since gone but Blue Jasmine, Magic in the Moonlight and especially the bewitching Midnight in Paris are all stellar examples of a master storyteller enjoying his craft. Café Society falls into this category – a very pleasing effort that’s gorgeously shot, wickedly sharp and contains absorbing performances from all involved.

It’s the 1930s, and a young man from the Bronx named Bobby (Jesse Eisenberg) decides to head to the bright lights of Los Angeles to sample life on the other side. He just so happens to have a very rich and powerful uncle named Phil Stern (Steve Carell) working as an agent to the stars in Hollywood, so Bobby seeks out a job from him. Once there, he is utterly beguiled by his Uncle’s secretary Vonnie (Kristen Stewart), but matters of the heart prove to be more complicated than initially seemed.

Playing in an era very comfortable to Allen, Café Society oozes 1930s charm, style and grace in every frame. Allen even acts as the uncredited narrator to the film. The Hollywood setting is a perfect canvas for his tale of love and life to initially take place in – full of larger than life characters and sun-kissed with that unmistakable Californian glow. As the story progresses, we shift to New York and we all know how adept Allen is on his home turf. This gives the film two very distinct halves.

The first half works best as Eisenberg and Stewart bubble with chemistry. It’s certainly not the first time the two have worked together onscreen and their natural ease of self shines through (especially in their initial exchanges) as Bobby tries to court Vonnie who’s already in a relationship. The second half of the film works well too but there’s a jump in years that takes place. I’d rather have seen those preceding years played out, however the shift in time allows for a nice ‘down-the-line’ view into the lives of characters we’ve already grown quite attached to.

The supporting cast also help make Allen’s on-the-mark script sparkle with verve. Parker Posey, Paul Schneider, Corey Stoll and Stephen Kunken all hand in note-worthy performances. Steve Carell is sensational and always steals his scenes whilst Blake Lively enters the story halfway through and is a welcome ray of sunshine. However the brilliant Anna Camp was so underused as Candy – a hilarious character that we would have loved to have spent more time with, especially given her humorous exchanges with Eisenberg.

Café Society is sharp, witty and superbly acted, with a visual style that echoes Hollywood’s glorious golden era. With a cast this impressive and writing this whimsical, we were always guaranteed a fun time, even if the first half plays stronger than the second. Woody Allen continues his crowd-pleasing trend of movies with life and life at their core – a story that might be set thousands of miles away and taking place in another land, but one that echoes true in everyone’s heart. When Allen is on this kind of form, you are sure to leave with a broad smile on your face.