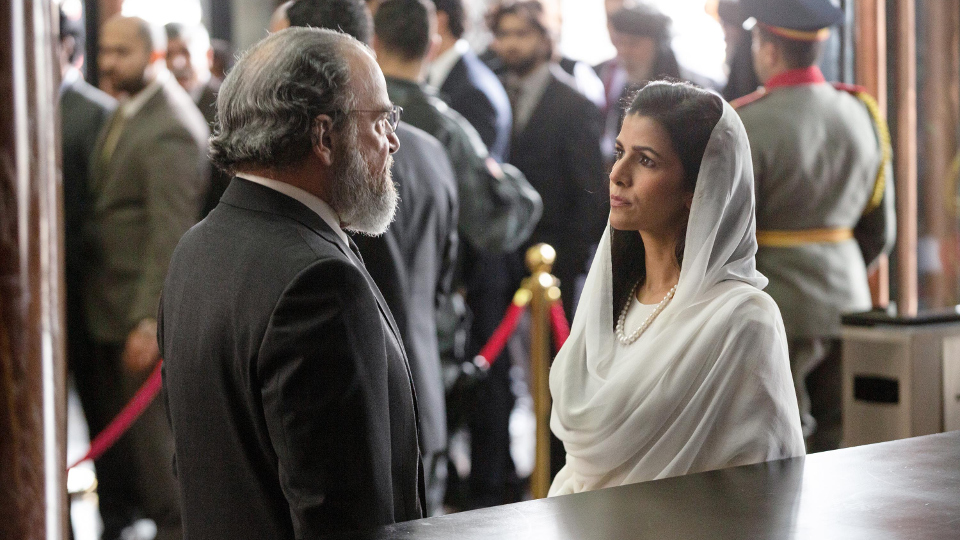 The fourth episode of Homeland season 8, saw Carrie (Claire Danes) get a surprise.

The episode opened up with Carrie returning to the CIA station having been out on her motorbike. One of the staff told her she needs to be more careful and that she shouldn’t be going out alone.

On her way back inside she noticed something going on in one of the rooms. Listening at the door she could hear people talking and it sounded like they were trying to decipher her conversation at the fountain with Yevgeny (Costa Ronin). Carrie looked worried but didn’t say anything about it.

The next day she was snooping around one of the server rooms. She was having a good rummage through one of the desks when military police walked in and asked that she go with them. A frustrated Carrie asked why but they couldn’t say. She demanded that they call Saul (Mandy Patinkin) and they said he was already fully aware. They then put her in a car and she soon realised they were headed to Bagram Air Base. Carrie got upset, presuming that she was to be sent back home, or worse.

At the air base she was greeted by Saul who looked rather harassed. He explained that President Warner (Beau Bridges) was on his way to meet Afghan President Daoud (Christopher Maleki). Carrie had been brought there at the President’s request. Saul dashed off to make preparations for the announcement that the war was over.

After the President landed he met with the Afghan President briefly. He then made a bee-line for Carrie where he thanked her for her time in Moscow and for the work she did that landed him the presidency. He told her that he was off to a military outpost where they would make an announcement that the war was over. Carrie was surprised that the Joint Special Operations Command had signed off on it.

After Warner left by helicopter, Carrie was transported in a fake motorcade with Jenna (Andrea Deck). Jenna pushed Carrie to find out what Warner had spoken to her about. Carrie was defensive at first saying it was personal but then opened up and said that he had simply thanked her. Carrie took a call from Samira (Sitara Attaie) who was in trouble and managed to convince her driver to help her go to her aid.

Samira had been out with her friend and they were enjoying the peace that the cease-fire had brought. When she arrived home she found her late husband’s brother Bilal (Omar Farahmand) waiting for her. She let him inside and he explained that she needed to come back to the village and marry him. Samira pretty much told him to leave but he soon returned with a couple of friends to make sure she complied. This is when Samira called Carrie.

Carrie managed to disable their car. After they failed to leave with Samira, Carrie and her driver pulled guns on them and escaped with Samira. Soon after Carrie received a message that recalled her to base.

Meanwhile, Saul was at the Presidential Palace, preparing things for the big announcement. ISI’s Tasneem Qureshi (Nimrat Kaur) was there and she pushed Vice President G’ulom (Mohammad Bakri) to see what he knew. He said he thought they were there because of her and she wondered if Warner had come to the country. While waiting for the announcement, Tasneem had a run-in with Saul who as good as thanked her for her attempt on the life of Haqqani (Numan Acar).

When Warner and Daoud arrived at the military outpost, they made their announcement live on TV. It was broadcast live on news around the world. Afterwards, Warner stayed later than planned to spend a little time with the troops. This made the CIA station team nervous.

Elsewhere in the episode, Max (Maury Sterling) was waiting at the outpost that Warner was visiting for a ride home. The soldiers wanted him to stay and when the time came to leave, he changed his mind and decided to stay.

At the end of the episode, Carrie arrived back at base and Saul was called away from the Palace. They were told that the helicopter carrying Warner had disappeared. The escort helicopter was looking for it and soon came across the wreckage where it had seemingly crashed. The status of Warner and Daoud is unknown.

Can’t wait for the next episode? Read our Homeland season 8 episode 5 preview.