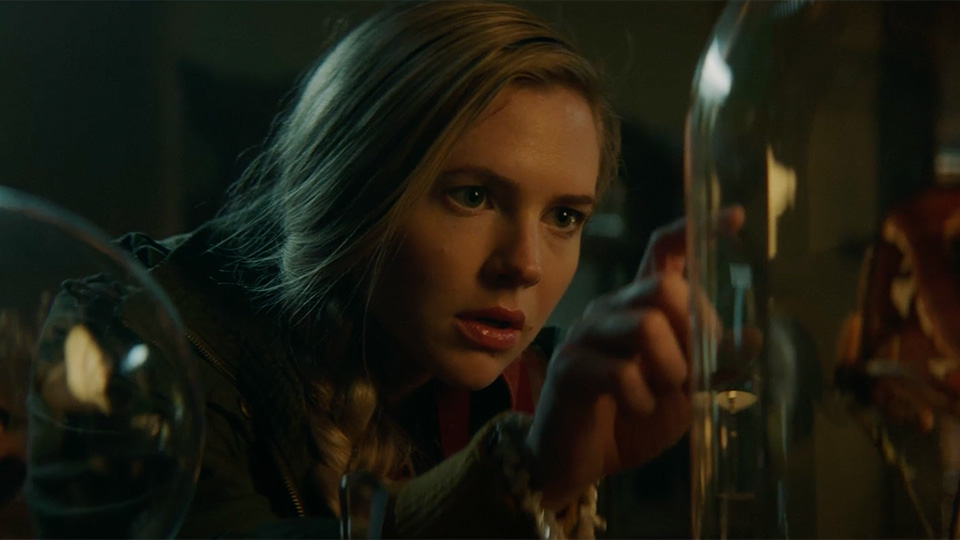 Sam (Caitlin Custer) enquires about a job at a funeral home after spotting a ‘Help Wanted’ sign hanging outside. She’s interviewed by the creepy and mysterious owner Montgomery Dark (Clancy Brown) who shares with her a series of gruesome and disturbing stories. After getting through three of them without Sam flinching, she shares a story of her own.

Anthology films seem to be all the rage at the moment in the horror genre. There are two of them at Arrow Video FrightFest Glasgow this year – A Night of Horror: Nightmare Radio screens tomorrow night – and Scary Stories To Tell in the Dark was one of the opening night films for the festival’s August Bank Holiday edition. Personally I can take or leave anthology films but I went into this one with an open mind.

The production values are impressively high and there’s a slick feel to this that adds to the overall atmosphere. The set-up isn’t quite as straightforward as you’re led to believe but each of the four stories told are actually pretty solid. From a housewife finding something deeply disturbing in her bathroom cabinet through to a babysitter fending off an unwanted home intruder, each one tells a tale of people behaving poorly and being punished for it.

With each story, the intensity moves up a notch. One of the standouts stars Jacob Elordi, the breakout star of HBO’s Euphoria, as a frat boy who is trying to add as many notches to his bedpost as he can. His latest hook-up leaves him with something very unexpected and while it’s obviously a cautionary tale about safe sex, it’s enjoyable and delightfully gory all the same.

The story that unfolds between Sam and Montgomery Dark slowly unravels between each of the other stories and it builds to a satisfactory conclusion. There are some nice moments you won’t expect and the last 15 minutes or so managed to surprise me. It’s definitely helped by the performances of Clancy Brown and Caitlin Custer, who make a watchable duo that have great chemistry as they trade stories back and forth.

The Mortuary Collection is a film that’s very well made and it’s suitably gory so horror fans will be pleased. It’s not particularly ground-breaking but it’s a solid enough yarn that it’ll hold your attention for its near 2-hour run time. How you feel about anthology films will very much determine what you make of this but if you’re happy to turn your brain off and enjoy some wacky scares, this would be a decent choice.