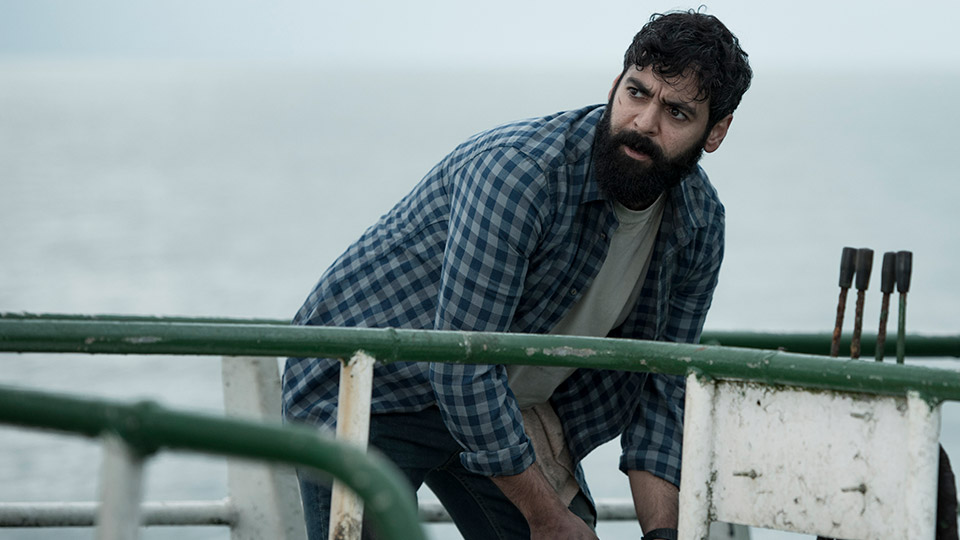 Marine biology student Siobhan (Hermione Corfield) joins the crew of a trawler fishing the West Irish sea for a research excursion. Taken under the wing of Freya (Connie Nielsen) and Gerard (Dougray Scott), Siobhan and the family are left stranded when their boat hits an unseen object. As they try to figure out how to get back to shore, Siobhan discovers that a parasite has infested the water supply and the group is locked in a race against time to save their lives.

Sea Fever comes from writer/director Neasa Hardiman (Jessica Jones, Inhumans) and it takes a very familiar story but tries to do something different with it. The best way I can think to describe it as a cross between John Carpenter’s The Thing and the classic episode of The X-Files Ice. Gerard sails the boat through a restricted zone without informing anyone else that he’s done so. That leaves his crew, and Siobhan, to feel a false sense of security about the trip until Siobhan takes a dive off the book to investigate what they hit and discovers a creature she’s never encountered before.

Hardiman builds up the story in a way that will be familiar to anyone who has seen a parasite horror before. Members of the crew start to act strangely, paranoia and mistrust sets in, and the crew are ripped apart as they try to overcome the parasite. Where Sea Fever succeeds is during its genuinely shocking, and crowd-pleasing, horror moments. Hardiman drives the tension and plays on the claustrophobia of the situation so that when you get to a literal eye-exploding moment, you’re on the edge of exploding in your seat at the same time.

The plot essentially turns into a ‘who will survive?’ guessing game and despite many of the deaths being predictable, there are one of two surprises before the film reaches the end credits. Siobhan is positioned as your stereotypical final girl and she plays the role convincingly enough, having to switch from meek-and-mild in the beginning to a strong and fearless leader by the end. She connects with crew member Johnny (Jack Hickey), who is one of the more level-headed and friendly people Siobhan finds herself trapped with. Their relationship doesn’t get fully developed but it’s a welcome reprieve from the inevitable doom-and-gloom that waits ahead.

Dougray Scott and Connie Nielsen adopt some very interesting Irish accents and they don’t get a whole lot to do really. Both are talented actors and it would have been nice for them to be able to truly sink their teeth into their roles. Ardalan Esmaili fares better as Omid, a crew member that falls in line with Siobhan’s desire to ensure the crew doesn’t take the parasite off the boat and cause an epidemic.

Sea Fever isn’t particularly original but it’s an enjoyable ride filled with tension and suspense. There are some brilliant horror moments along the way and the climax takes you to a place you might not expect. Hardiman excels at bringing the horrors of being trapped on a boat to life but the characters could have done with a little more fleshing out. Sea Fever is a popcorn flick and I’m sure it’s going to be a crowdpleaser too.